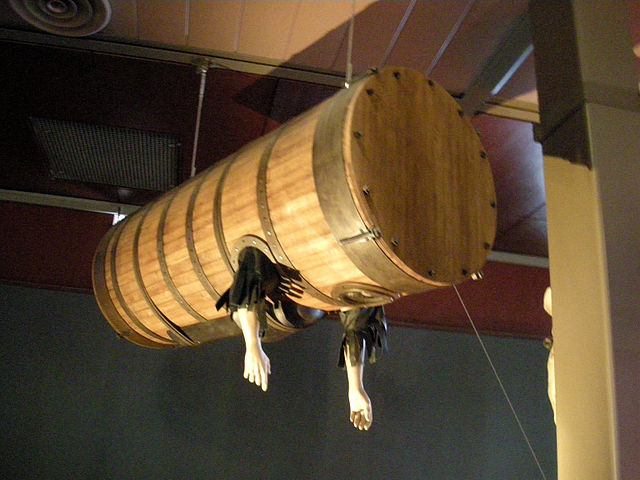 okcukv: A man joins the navy and is shipped out immediately to an aircraft carrier in the middle of the Pacific Ocean. The captain is showing the new recruit around the ship, when the recruit asks the captain what the sailors do to satisfy their urges when they’re at sea for so long.

He takes the recruit down to the rear of the ship where there’s a solitary barrel with a hole in it.
“This’ll be the best sex you’ll ever have. Go ahead and try it, and I’ll give you some privacy.”

The recruit doesn’t quite believe it, but he decides to try it anyway. After he finishes up, the captain returns.

“Wow! That was the best sex I’ve ever had! I want to do it every day!”

“Fine. You can do it every day except for Thursday.”

“That’s your day in the barrel.”

Toad32: When I was 10 we would house sit for our neighbor who was away 6 months out of the year. He had a pool. You can guess where this is going.

I would take a 5 gallon bucket, and put sand weights tied to the handle and place it upside down. You could walk the bucket to the deep end of the pool (10ft) and stay down there for roughly 5 minutes before I would notice the oxygen tasted funny (I was 10) and then return to get fresh air. It was so much fun as a kid to not have parents yelling at me not to do it.

Then I got a used air compressor, and hooked up a line to the bucket. Now I could stay in under water indefinitely! You could taste the oil in the air though from the compressor, so we didnt do it for any serious prolongment. Mostly just swimming to it, staying for a minute, then surfacing again.

I did all this with zero input and no training or oversight.

[Took well over a century before the first proper submarine](https://en.wikipedia.org/wiki/John_Philip_Holland)

Previous Post: « “White House is like a subway, you have to put in coins to open the gates.” Johnny Chung (1997)
Next Post: “Don’t you know there ain’t no devil, there’s just god when he’s drunk.” Tom Waits »