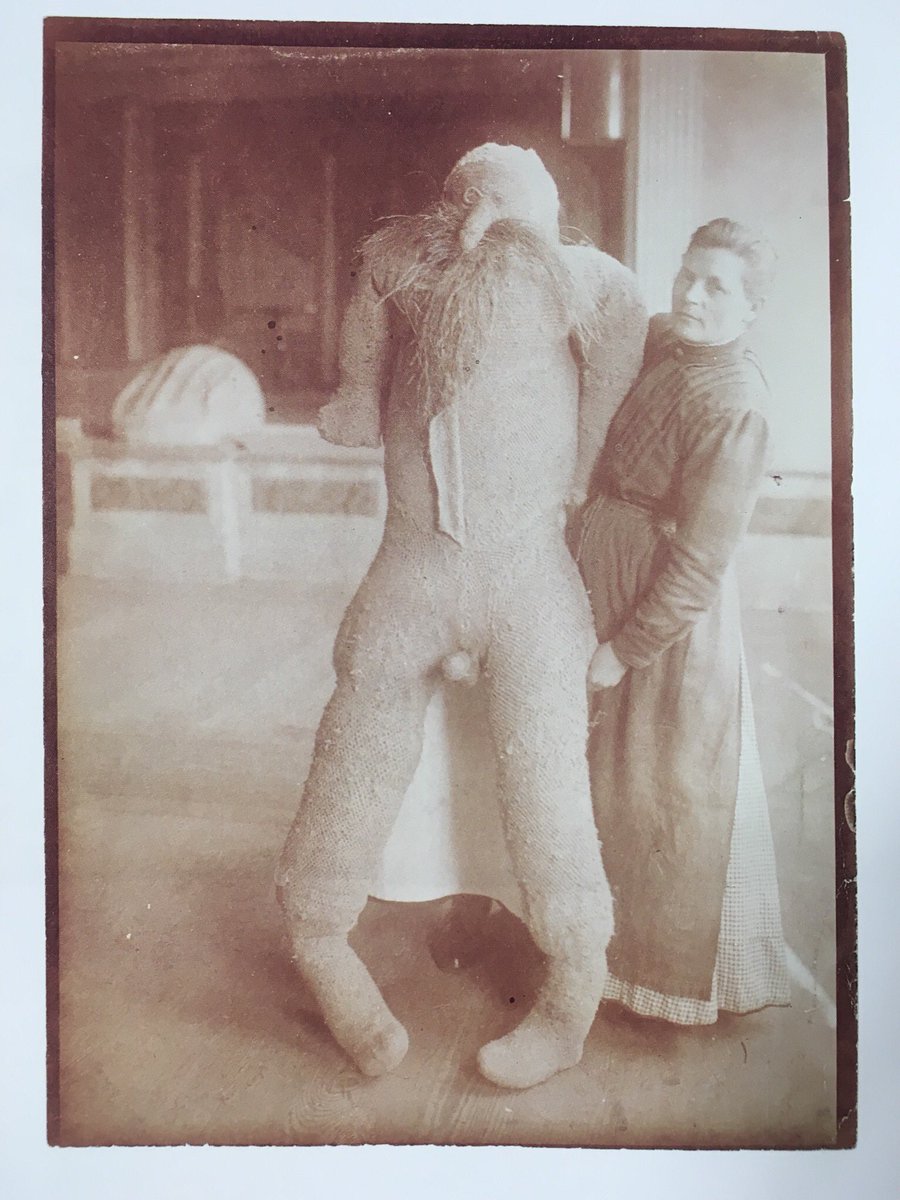 This photo is part of the Prinzhorn Collection. The collection (on display in the University of Heidelberg Psychiatric Clinic) is made up of approximately 6,000 works, all created by inmates of psychiatric institutions between 1840 and 1940. It ranges from water-colours, drawings, paintings and sculptures to textile works and texts. The major part of it was collected by art historian and psychiatrist Hans Prinzhorn (1886–1933) while he worked as assistant physician at the Psychiatric Hospital of Heidelberg University.

Katharina Detzel (1872, Luxembourg) was put in the mental institution in 1907 after performing abortions and sabotaging a railway line as a political protest. She persistently fought against her internment and tried to escape several times. In her desire for freedom she made a whole series of runners and keys out of wood. She made figurines from bread dough (e.g. Shakespeare). Detzel also worked on a human figure with wings and made the photographed life-size male, which she hanged in her single cell. With the help of this figure (“which exuded a certain authority with glasses, penis and beard, it reminds us of the ideal type of a scientist or physician of that time”) Detzel tried to be relocated from the cell to the dormitory, from where she could escape. She explained to the doctors that she would soon be like this doll: should she continue to be isolated, then she too would soon be lifeless in the cell. Detzel was unsuccessful: The doctors did not respond to her threat, but removed almost all items from the cell: “Mattress, canvas, clothes (even her shirt) was taken from the patient, she has only chaff in the cell.”

Detzel continued to vigorously opposing the suppression of patients by staff and sanctions (e.g. prolonged baths). In her struggle against social injustice, she wanted to establish a home for infants, compiled a pamphlet against prostitution and wrote a play entitled “The extramarital child or the child bed of righteousness”.

After 19 years, she finally managed to escape from the institution. She moved in with her daughter. In 1939 Detzel was arrested again. This time because of theft and forgery. She was soon institutionalised, this time in Andernach. In 1941 she moved to another institution, Johannestal in Süchteln. It is uncertain if she survived the war and the Nazi Euthanasia Program.

Previous Post: « Mushroom cloud from the Ivy Mike nuclear test, Marshall Islands, 1952
Next Post: US mortar men walk past a Sherman tank knocked out by a penetrating hit between the glacis and the transmission in Santa Maria Infante, Italy – May 1944 »