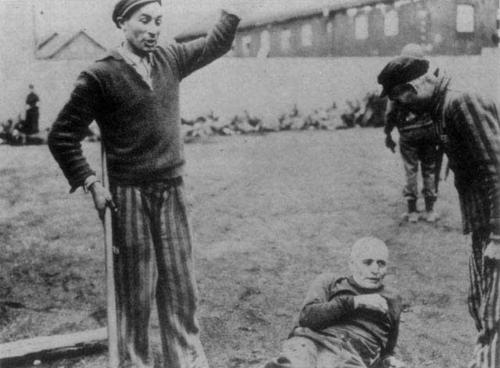 kissmybacon: I don’t think that’s a guard. That’s most likely a kapo. https://en.wikipedia.org/wiki/Kapo_(concentration_camp)

edit: I looked it up, I was wrong and you are correct, my apologies. https://collections.ushmm.org/search/catalog/pa12468

ptusa: For people interested in what happened to Germans in the year after the war, check out the documentary [The Savage Peace](http://www.imdb.com/title/tt5267658/). It’s on netflix. It’s a brutal watch, so don’t bother with it unless you have a strong stomach.

Datplebtho: Along the wall are the bodies of Waffen-SS POWs who were shot out hand by the liberating GIs. Grim.
https://en.m.wikipedia.org/wiki/Dachau_liberation_reprisals

dave_890: The entire German army was collapsing and in retreat, but the High Command kept the camps running until the very end.

Previous Post: « “If you went back and fixed all the mistakes you’ve made, you erase yourself.” Louis C. K.
Next Post: A Group of Samurai in front of Egypt’s Sphinx, 1864 »