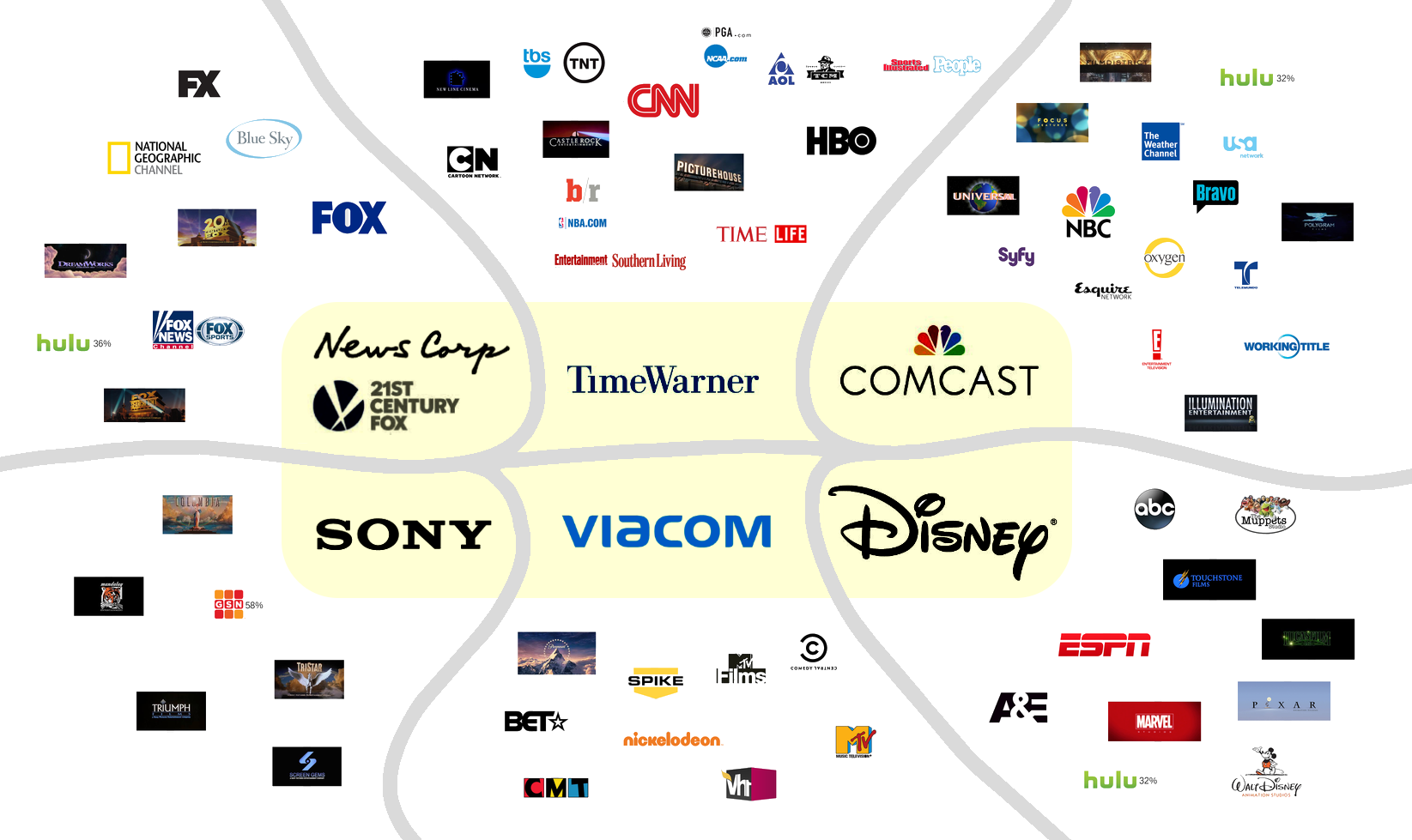 This info graphic is to demonstrate the power and reach the 6 media corporations have. Its an illusion of free choice.

It’s even worse than what you think:

The truth is that power is much more concentrated than most people even realize. Vanguard, Blackrock, State Street, and a handful of other financial holding companies own controlling shares in all major media companies.

Oh but it gets much worse. What are some of the biggest corporations in other industries you can think of? Have a look at the top shareholders in Microsoft, Pfizer, Exxon, Coca Cola, It’s the same three financial companies! Together, these companies often own 20-50% of almost every major publicly traded corporation in Amerca.

The true phantom menace is the financial cabal.

Abe_Vigoda: The media is in collusion with the US military/industrialists.

Also in terms of Disney I suggest reading [Storming the Gates of the Magic Kingdom: Wall Street, Raiders and the battle for Disney.](https://www.goodreads.com/book/show/969799.Storming_The_Magic_Kingdom)

Sign_Upp: When Clinton signed the Telecommunications Act of 1996, restrictions on ownership changed, and all hell broke lose.

NewPerspectiveTruth: Submission Statement: This info graphic is to demonstrate the power and reach the 6 media corporations have. Its an illusion of free choice.

crestind: The control is only real if you care and/or pay attention to what they have to say.

tl;dr you are part of the conspiracy. You enable everything by watching. Pirate everything.

Veritas__Aequitas: There’s two groups, the loyalists (pro Israel, build the wall and whatnot) and the “George soros runs the world” folks, who are already skeptical about T_D. They’re quite disenfranchised nowadays since Trump showed himself to be no different from his predecessors.

concernedcitizen88: As someone who knew 911 was an inside job during both Bush and Obamas admins and did not vote in 2016, Trump is not progressing the globalists plans like Bush and Obama did. Some of his policies actually go against what was the New World Order and is now Cultural Marxism. There’s plenty of valid reasons not to like Trump and many of his decisions and most of his appointments but to say he is “no different from his predecessors” is incorrect.

MagnusTheGreat: And at the same time showed support to people who were literally armed outside a Synagogue. And the people praying inside got so scared that they literally took the Torah with them when they left.

Putin_loves_cats: I’ve gone further down the rabbit hole, than most (even here). Khazars (fake “Jews”), are tip of the iceberg, imo.

Lucy-Sky-Diamondz: “Khazars (fake “Jews”), are tip of the iceberg, imo.”

I_AM_AMHAARETZ: Most of them are loyal to Israel which necessarily means they are Anti-Arab and Anti-Muslim and Anti-Russia.

21P_Tom: Now Disney own Fox to. You can add Facebook n Amazon to that new age media now

maahhkus: And any news outlet that doesnt fit into this chart is fake news

funkywinkerbean45: This is the reasons I read non-US sources too.

OliverHeist: No its crony capitalism. In a true capitalist system, competition would make it extremely hard to become big enough to control monopolies etc. You need a complicit government to starve competition for that.

pizzasuprema: 1800s America was pretty damn close, and was one of if not the best place to live on Earth at the time.

CaptainApollyon: I understand the point you’re trying to make but it comes across as “real capitalism requires slave labor”

No it requires no government interference. There places on Earth today that have slavery still they are nowhere near as prosperous or even as advanced today as America in the 1800s. Your comment implying that slavery is the cause of the economic success is very humourous. It comes across as “slavery is the best thing you could do for an economy!”

Which given the communistic vibes of your op is hilarious since communists seek to enslave everyone.

idunnomyusername: I wouldn’t say that banning slavery is an economic interference since it’s a human rights issue. Regardless an anarchistic situation does not cause slavery it allows it.

If you think the government is not interfering with the above companies, and their industries with mountains of regulations, taxation, and bribes you’re just wrong.

And there’s nothing wrong with natural monopolies in a free market economy that’s irrational. A natural monopoly just means no one else can offer a better deal. Splitting up such a company, and trying to create artificial competition is pointless, and has hurt our economy every time the government has done it.

AugustusRome1: Go a step further and find out who the major shareholders are in each of those 6 companies. Then look at who owns those groups.

Edit – I’ll give you a hint, State Street, Blackrock, Vanguard… the illusion is that there are 6 independent media companies when in reality these 6 companies are more or less controlled by the same group. It doesn’t matter if it’s Fox or CNN, what matters is which layer of insulation they’re on.

Right now CNN, MSNBC, Hollywood etc are outer layers of insulation, they are doing the bidding for and attacking the threat. If the “percieved threat” gets closer to the Final Boss (Bank for International Settlements/BIS) you’ll eventually see Fox News turn against the threat. The way it is structured right now, their final layer of protection in the U.S. is most likely Wall Street. The market is building trust currently so if and when it turns, things could get very ugly. I wouldn’t be surprised if a new money system has been developed as a defense.

Do you remember what Trump said about Puerto Rico and Wall Street?

ProbityJoe: The heads of those companies are almost all jews as well. Jews, Jews run it all…

Cloudy_Wealth: To be fair, if you guys said Zionists instead if Jews you would be more accurate and beyond rational criticism. Zionism is a political movement, but Jew is multiple ethnic groups throughout the world and a religion.

robowriter: I wonder what they consider anti-Zionist Jews to be then.

Self-hating Jews… Seriously… its ridiculous sense most “zionists” are not Jews. Those religious evangelical people in the middle of America are insanely pro-zionist. There is some pastor mega church guy that basically tells them what to do and think. Instead of donating to their own communities and people they literally send their money and donations to the Israel..

donwailey666: Jews make up 2 pct of the us population and control at least two-thirds of our media

explain that to me

panthrosrevenge:And even worse problem is that 100% of our media is controlled by israelis.

17 states have laws that punish boycott of israeli products.

Think about it. A nation founded on boycotts which enshrined boycotting as a fundamental right of speech has states which ban boycotting of a foreign country.

That sounds like treason by a political prostitute. But this country has been sold to israel a long time ago.

Can you imagine if states created laws banning boycott of chinese, russian, mexican, canadian or any other country? The israeli-owned media in the US would go crazy. But laws attacking americans’ constitutional rights are okay as long as it benefits israel. Russians supposed spent $100K on facebook and the israeli media went crazy for weeks. Israelis have enacted laws in 17 states attacking americans’ fundamental constitutional rights… pretty much silence.

Most of the billionaires in the US are israelis. Israelis make up 1% of the US population.

Previous Post: « Australian soldier Private George “Dick” Whittington is aided by Papuan orderly Raphael Oimbari, near Buna on 25 December 1942
Next Post: “Happiness is a choice. And peace is a state of mind… And Both are free.” Leigh Mercree »