On Monday morning, an Amtrak train derailed while crossing an overpass in Dupont, Washington. Law enforcement say at least six people are dead and 78 others were injured. Independent journalist Mike Cernovich tweeted an archived link to a now deleted article from “prominent,” far-left website It’s Going Down, on an ANTIFA group bragging about pouring concrete on train tracks in Olympia, WA.

The story is from April, but a more recent post from another far-left website, published just 9 days ago, is still up.

Olympia is a 20 minute drive from Dupont.

In late November, ANTIFA sabotaged a train in Olympia.

Police raided an ANTIFA encampment in Olympia following a train being sabotaged by anti-fracking activists — but the anarchists claiming credit for the act have vowed to continue until “every officer is down.”

Earlier this year, a prominent #Antifa website published an article tacking credit for the sabotage of train tracks in Olympia, WA. In this article they claimed to have poured concrete on the tracks. It has since been deleted,” tweeted Far-Left Watch.

Earlier this year, a prominent #Antifa website published an article tacking credit for the sabotage of train tracks in Olympia, WA. In this article they claimed to have poured concrete on the tracks. It has since been deleted. #Amtrak

“Here is an article from 9 days ago where #Antifa extremists claim they sabotaged train tracks. This is the far-left. #Amtrak,” tweeted Far-Left Watch. 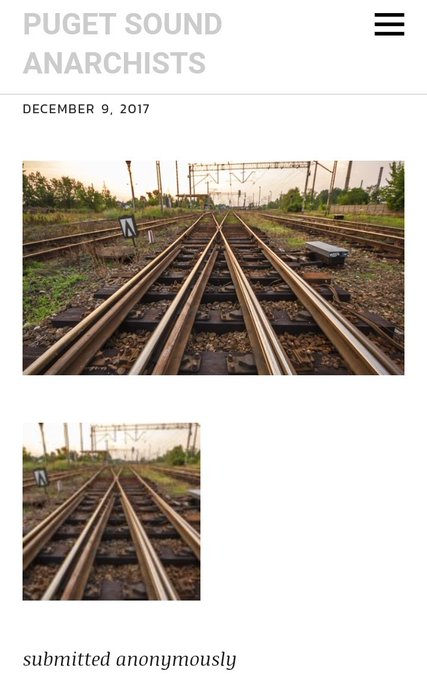 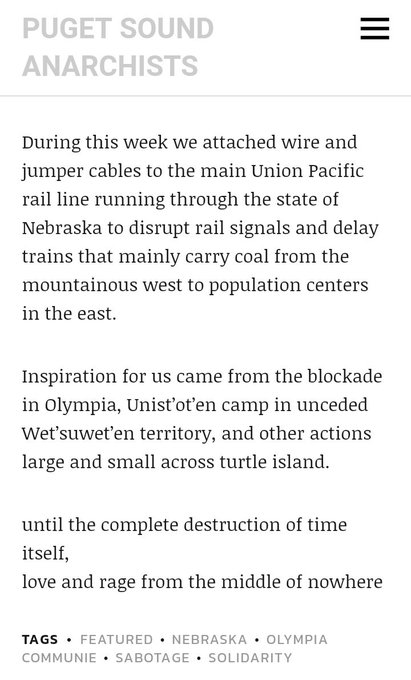 Here is an article from 9 days ago where #Antifa extremists claim they sabotaged train tracks. This is the far-left. #Amtrak

During this week we attached wire and jumper cables to the main Union Pacific rail line running through the state of Nebraska to disrupt rail signals and delay trains that mainly carry coal from the mountainous west to population centers in the east. Inspiration for us came from the blockade in Olympia, Unist’ot’en camp in unceded Wet’suwet’en territory, and other actions large and small across turtle island. until the complete destruction of time itself, love and rage from the middle of nowhere

Cernovich then tweeted an archived link to the deleted piece from It’s Going Down.

Early in the morning of April 20th we poured concrete on the train tracks that lead out of the Port of Olympia to block any trains from using the tracks. We took precautions to notify BNSF (the train company) – we called them and we used wires to send a signal that the tracks were blocked. We did this not to avoid damaging a train, nothing would bring bigger grins to our faces, but to avoid the risk of injuring railway workers.

This action was done to disrupt the movement of trains carrying proppants used in natural gas fracturing. These train tracks are part of a system of pipelines, fracking wells, mines, clearcuts, control centers, fiberoptics, dams, highways and factories that cover the planet and are physical manifestations of a process that is destroying the ecosystems, cultures, and inhabitants everywhere. Behind this network of infrastructure there are politicians, CEOs and bureaucrats who have private security, cops, prison guards, non-profit directors, PR consultants and the legacy of 500 years of colonization to back them up. We oppose all of these manifestations, infrastructural, personal and ideological. We blocked the train tracks because we want to blockade the entire web of domination that is slowly killing us.

While law enforcement is still investigating the cause behind the train’s derailment, ANTIFA reportedly sabotaging the tracks and then deleting the post raises serious question about their potential involvement in Monday’s incident.

stupidtroll: Love the inclusion of “panicked” in the title. Propaganda

ShadowSeeker1499: Talk of antifa on here is increasing despite no rumblings from antifa themselves. I think someone on the right is looking for a boogieman to blame for something that will happen in the near future.

Watch out for manufactured outrage and possible flare uo of identity politics and possible riots whether real or fake.

AngryD09: For those that don’t know, Olympia, Wa. Is close to Evergreen college, Joint Base Lewis-McChord and about an hour south of Seattle. To say the area is lousy with dirty hippies is an understatement.

BanMikePantsNow: The preemptive shilling is here very telling. There is no way that ANTIFA can be ruled out or in this soon. However, if some pro-Trump website had posted about so much as pissing on train tracks in Washington, it would be on the front page of reddit and the top story on CNN.

Askmenothingok: Aw shut the f*** up you’re trying to connect Antifa to this train derailment they same day it happened, there’s people dead from this man.

psy_raven: Jesus Christ. What is wrong with those people?

kadinshino: I just wonder how long concrete takes to cure. Even if using quickset, it would take a few days to be not brittle enough to be able to derail a train.

during weather and winter, each morning these tracks are normally inspected by a rail team. (i live near part of the Amtrack route line) Around 6 am to make sure no debris or storm runoff has affected the train line. there are 4 times amtrack runs on this line a day. (not including miscellaneous freight trains. the first run of the day is 8:15 am.

wanted to add, our local paper was saying the train was traveling at 81mph before getting derailed. the area that it was crossing was a 30mph zone.