Kevin Castel, a judge for the U.S. District Court for the Southern District of New York, nearly split the difference between requests by federal prosecutors for at least 20 years in prison and pleas by Tucker’s lawyers for no more than 15 years.

It will be Tucker’s second stint in prison. He spent a year in prison related to a bank fraud scheme and was released in 1992.

On Friday, Tucker was immediately taken into custody after his sentencing.

Tucker’s attorney and co-defendant, Tim Muir, was sentenced to seven years. Muir will report to prison at a later date. Restitution will be determined in February.

“For more than 15 years, Scott Tucker and Timothy Muir made billions of dollars exploiting struggling, everyday Americans through payday loans carrying interest rates as high as 1,000 percent,” said acting deputy U.S. Attorney for the Southern District of New York Joan Loughnane in a written statement. “And to hide their criminal scheme, they tried to claim their business was owned and operated by Native American tribes. But now Tucker and Muir’s predatory business is closed and they have been sentenced to significant time in prison for their deceptive practices.”

Tucker, who started his foray into payday lending with a storefront operation in Kansas City in the late 1990s, became an early pioneer of online consumer lending.

Payday loans extend small amounts of cash to consumers, often financially strapped and with poor credit histories, with the expectation that the loan is repaid within weeks. Payday lenders charge high interest rates to hedge for the possibility that some consumers can’t pay their debts back.

Tucker’s businesses, which operated under brand names like 500FastCash and Ameriloan, charged interest rates ranging from 400 percent to 700 percent, far beyond rates permitted by states that regulate payday lending.

Regulators and law enforcement authorities claimed, and a jury agreed, that Tucker established his businesses on American Indian tribal land as a way to sidestep state laws and charge illegal interest rates.

Moreover, Tucker’s businesses duped customers by automatically withdrawing interest payments from a consumer’s loan balance while not touching the principal amount so that the loan would renew on the consumer’s next payday.

Tucker, who asked for leniency in his sentencing, wrote in a letter to Castel that he employed as many as 10,000 people and offered a “fast, simple, and reliable service.”

“Although I saw myself as being an entrepreneur, a jobs provider, and a contributor to the American economy, I’ve learned that others view me through a different lens,” Tucker wrote. “I am very sorry that our leaders castigate me as a villain, or some type of predator.”

Federal prosecutors asked for a longer sentence, arguing that there was “every reason to believe he will again defraud others as soon as he has a chance to do so.”

Tucker is also on the hook for a $1.3 billion penalty arising from a civil case brought against him by the Federal Trade Commission.

Tucker is appealing the FTC case, and has said he plans to appeal his criminal conviction.

Tucker was also charged last month in Kansas, along with Shawnee attorney Brett Chapin, for filing a false tax return that did not reflect more than $100 million in income that Tucker made through his businesses. Source 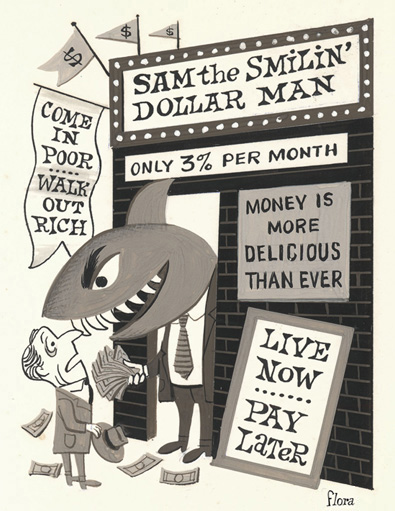 Ellisdee: I fully recommend watching the program ‘Dirty Money’ featuring him just prior to his conviction (season 1 episode 2). The entire episode is nothing less than a complete justice boner. Watch everything get repossessed and his life fall apart. These people scammed 1.5 million people. Desperate people, struggling to make ends meet.

The episode is infuriating, as his close friends defend his actions, his wife and child, too. He himself sees nothing wrong with what he has done.

I’m not usually a vengeful person, but his lack of remorse, the fact he scammed such a huge amount of people, who were probably facing some of the most difficult times in their lives, I genuinely hope this man has a horrendous time in prison.

Roofied_Elephant: Quick payday loans are among the dirtiest of “legal” schemes that are designed to f–k over people who are already struggling financially. This piece of sh*t needs to rot in hell.

Diggas4Triggas: It is important to understand that many consumers literally have no where else to turn for money. Unfortunately this is not the payday lenders fault, and these lenders are not the root cause. For many, they are in such bad financial shape, that normal banks will not lend to them. Many have exhausted sympathy from friends and family who are maxed out having helped in the past. Their next paycheck is the only tangible asset they have to their name.

I know I will be down-voted for this but… once you realize that this is their last life line, your opinion should change. The American version of these loans had standard language which pretty clearly stated what would happen just like it does in other countries. In the Netflix episode they call it “fine print” but it is actually normal size and only about two short paragraphs long. In so many words it reads… “What day does your paycheck come? This is a payday advance, so when it comes you owe the amount in full. If you don’t pay in full, we will originate another loan and charge you that loan origination fee every two weeks, which will cover you until the next payday. When you pay in full, we will not open another pay day advance in your name…” It’s not a trick, it’s a contract, and the nature of the contract is in the name… PAYDAY… As in “on payday you owe us.” It’s structured this way because the paycheck is their only collateral. It’s not a hard concept to grasp, and these lenders would bankrupt otherwise, because their client demographic is literally “people in debt with no money and no other hope, who never pay bills on time and are in a pinch”…they would never get paid if they didn’t take it from their accounts directly. The real issue is that payday loans only exist because people in a pinch exist… its a shitty last life-line, not some malicious plot. There is a reason this is the only option for these consumers to begin with, they have a history of not paying money they owe.

Kay22610: I watched a few of the episodes when it came out, but haven’t finished it yet. This piece of shit’s episode was the one that made me turn the TV off because I was so angry.

I hope he dies in prison.

Gimmepizzaslow: Good! He should have gotten life. What a scumbag.

> I am very sorry that our leaders castigate me as a villain, or some type of predator.

Umm…because you are, you piece of sh*t?

« “There is a cult of ignorance in the United States, and there always has been…..” Isaac Asimov
German View Of A Battle, WW1, Colourised »