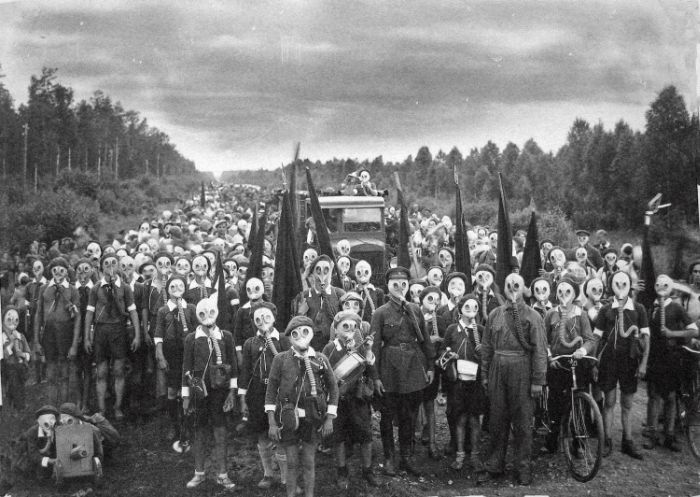 Pioneers of Leningrad in a defense drill, 1937

Viktor Bulla’s photograph of hundreds of children wearing gas masks was not meant to be ghoulish, a commentary on war or lost innocence, but rather exemplified a reason for pride — the country was blessed with well-trained, well-equipped and obviously courageous young fighters. The picture dates from 1937, four years before the Siege of Leningrad, and that makes the weirdness vivid and poignant. So many of the children here would have died in the Siege, or lived through it in the civil defense force, eating wallpaper paste and digging trenches. How brave and ready they must have felt in 1937, though.

During the Great Patriotic War the Pioneers worked hard to contribute to the war effort at all costs. Thousands of them died in battles as military personnel and in the resistance against Nazi Germany in its occupied territories as partisans and Pioneers under secrecy in enemy-occupied towns and cities, even in concentration camps. Four Pioneers would later receive the coveted Gold Star Medal as Heroes of the Soviet Union, and countless others were awarded various state orders, decorations and medals for acts of bravery and courage in the battlefield, on enemy lines and occupied territories.

BoinkBoinkEtAliae: That is legitimately terrifying and I see now why Doctor Who made two whole episodes about it

Moonman781: This is also the cover of the album Gas Mask by the rap group The Left. I always wondered what the story behind it was.

Cahallfresh: Is that a toy howitzer, or whatever the proper term is called?

Or is that a tiny shielded gun?

kara_scim: Are you my mummy?

xuaryhpaz: À French youtuber (Ici Japon) just posted a vidéo on a Japanese island that clickbait articles show this image of, saying because of the volcano everyone wears masks. And then I see this ?!

CN14: Looks like the inspiration behind The Black Parade.

Previous Post: « Schoolboys dressed in wool petticoats on Inishakra Island, Aran Islands, Ireland circa 1915
Next Post: A female spy who was the last woman to be executed in Finland, ca. 1943, Helsinki »