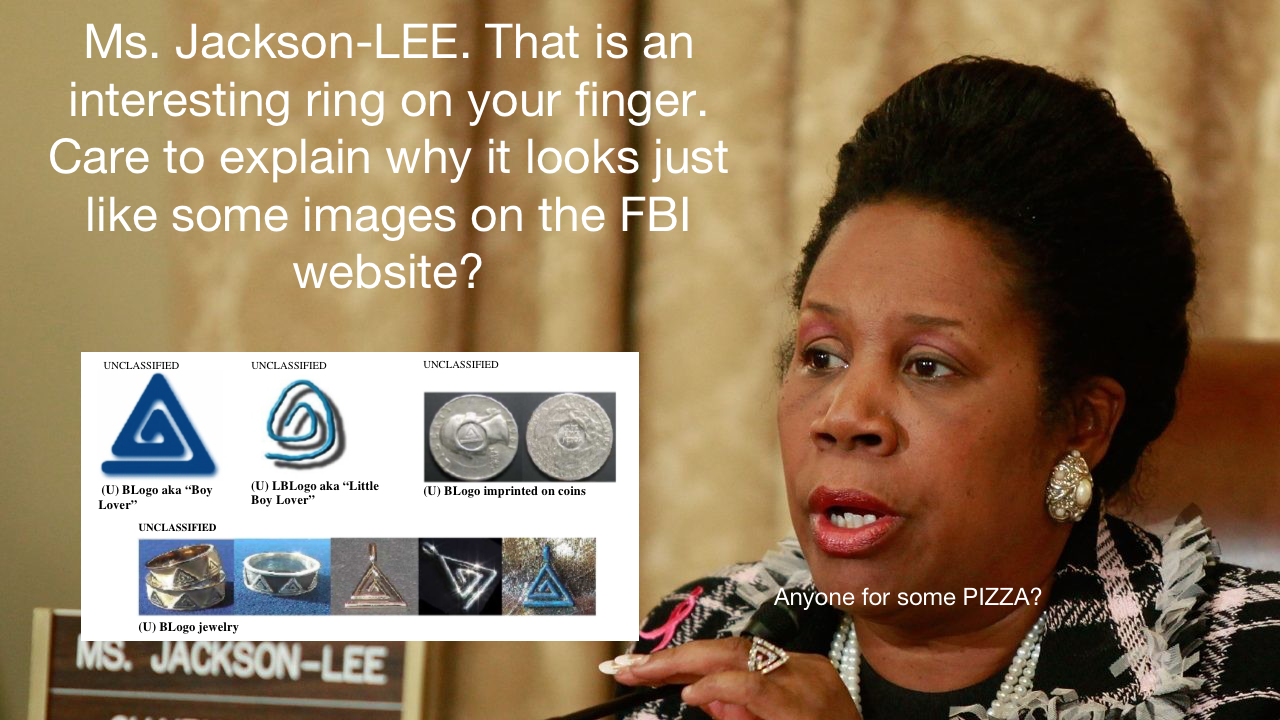 Tha_Dude_Abidez: It’s from a House Committee hearing on a TSA security breach, December 16, 2009 in Washington, D.C.

ArsonMcManus: It’s not the same symbol though. Spirals the wrong way.

gravitas73: Same shills here with the same talking points every time this symbol crops up.

Thanks shills you’ve convinced me and everyone else pizzagate is real.

There’s a cannabis extract company, pyramid pens, that has it as its logo here in Colorado. But I’m pretty sure they just sell weed

dczx: I’m not a fan of Shelia Jackson, but I think she is just wearing jewelry…

BigRedKahuna: I’m going to call this now. Absolute bullsh–. Not that she is wearing a ring. But everything else. This is just someone trying to start Pizzagate level BS rumors.

Want to change my mind? Show me where on the FBI it lists these symbols as bona fide pedophilia symbols. All I’ve seen are bullsh– links and snope links.

Mooseisabitfat: The dreaded triangle with a swirl in it strikes again. Truly the most heinous of basic shapes.

sydneybluestreet: Nice catch. “Their love of symbols will be their undoing”, Q.

You made a lot of people unhappy with this thread OP

ArsonMcManus: The symbol meanings are bogus and it’s not even the same symbol on her ring.

Janoz: Pretty blatant in my opinion.

Gabrielredux: She is truly one of the worst ever in Congress…. even Texas is ashamed of her sh–.

Modern-witch: Let’s search for a bit more evidence of possible pedophelia before we get in too deep. A symbol isn’t enough. It sure can be an indicator, but we need more proof before we should assume anything.

AnonymousPandaLord: Come on guys, it is just some jewelry… she is not worshiping a pedophile secret organization

peyote_the_coyote: Submission Statement: Is Rep. Jackson-Lee a kid diddler? Does she like little boys? Or is this symbol just a coincidence?

DogSnoggins: NO WAY. Was that ring photo-shopped in? If not, wtf.

Lyra_Fairview: This needs to get to the top

spqrherewecome: That’s enough evidence, I believe, for the NSA to investigate her and her family.

Apersonofinterest666: Are you posting this because she’s black?

Rdubdanger: You’re only saying that because she is black…..

Brian24jersey: I don’t think she is a pedo but she is unstable and needs to be removed

I’ve seen some folks going to extreme measures to debunk the Wikileaks FBI pedophile symbols. So here is a SCRIBD source of the Federal Bureau of Investigation document. “FBI investigations in several cities have uncovered several symbols used by pedophiles to proclaim their attraction to children.” I found it necessary to submit further proof regarding the inquiries into the Wikileaks pedophile symbols. In this submission, one can find a SCRIBD source of the official document from the Federal Bureau of Investigation (FBI). “FBI investigations in several cities have uncovered several symbols used by pedophiles to proclaim their attraction to children.”

oxfouzer: What makes you think scribd is a legitimate source? This looks nothing like a normal FBI document, and is missing many of the markings I’d expect… I’ve seen this document before and I would put it at like 20% probability of being legitimate.

OniExpress: As I’ve still yet to see any real-world evidence of this, I’ll take it with a grain of salt.