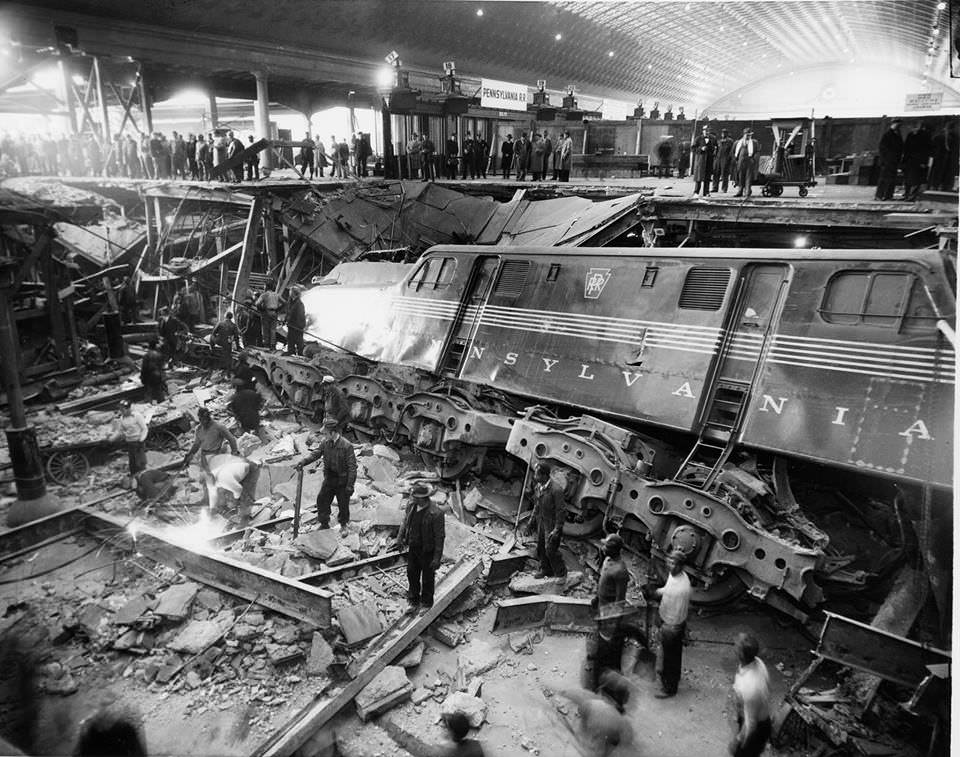 TheOnlyBongo: The locomotive in question is a Pennsylvania Railroad GG1 which were built between 1934 and 1943 and saw service as late as 1983 surprisingly, having changed hands from Pennsylvania Railroad to Penn Central, Conrail, and even Amtrak (Which is quite a long running history considering all the other engines that were build, replaced, and scrapped in its time of use). This specific locomotive is PRR GG1 No. 4876. After its crash at the Washington DC Union Station, it was repaired and taken back into service and stayed in service until it was retired and donated in 1983. It found its way to the B&O Railroad Museum and was initially slated for restoration and display but was put on hold when the roof of the museum collapsed in 2003, resulting in damage and destruction to many preserved locomotives and rolling stock (The cause of the collapse is attributed to building inadequacies when the roundhouse was first built almost 125 years ago). PRR GG1 No. 4876’s restoration was but on hold as focus was put more onto repairing the building and restoring whatever damage was caused to the locomotives and rolling stock stored inside (Answer: it was a lot). As of now, 4876 is not available for public viewing and has sat in the museum’s yard ever since, having been broken and graffiti’d by vandals, although there are plans to restore the locomotive to original condition but money is always tight at such museums, and a setback like a roof collapse and repairing of destroyed equipment is definitively huge even if the event was nearly 15 years ago. The cherry on top of that is that no surviving GG1 will ever be restored to running condition. All schematics of the insides of the GG1 have been lost, and add on top of that ripping out the insides is even more of a pain due to materials such as asbestos being very prevalent in its construction, so any and all surviving GG1 locomotives have to be moved by an outside motive power.

J_West_of_Wakefield: Dwight D. Eisenhower’s inauguration was the next week, so they lowered the locomotive into the basement and built a temporary floor over it. The locomotive was cut up into six foot sections and taken out in pieces. She was later rebuiltand returned to service. She was the only GG1 to ever be involved in a wreck and today resides at the B&O Railroad Museum.
https://www.youtube.com/watch?v=GwAW9IBEDLg

un-sub: Never comin’ back… wrong way on a one-way track.

RentAscout: Wow, nobody was killed according to old timey radio man.

WelshPorkSwordsMan: Near enough every single person in the image is wearing some form of hat or headwear!

Brad_Wesley: I just watched Silver Streak the other day. Didn’t think something like that could happen.

Previous Post: « The hull of a Hughes Hercules, the largest flying boat ever built, owner of the largest wingspan of any aircraft that has ever flown under construction, 1945.
Next Post: “Fans don’t boo nobodies.” Reggie Jackson »