CNN reports that Donald Trump Jr, and his father Donald Trump, and others in the Trump Organization received an email in September 2016 offering a decryption key and website address for hacked WikiLeaks documents, according to an email provided to congressional investigators. The email was sent about a month before Wikileaks began releasing hacked emails from the Clinton campaign.

Trump Jr. claims to have no recollection of the email, which was sent September 14.

Ten day prior, Trump Jr. did something he had never done before — mentioned Wikileaks on Twitter.

The day Trump Jr. got a Wikileaks encryption key, he promoted Wikileaks for the first time

For those who have the time to read about all the corruption and hypocrisy all the @wikileaks emails are right here: http://wlsearch.tk

These direct messages were shared by Trump Jr. last month after their existence became public. Here is the entire chain of messages with @wikileaks (with my whopping 3 responses) which one of the congressional committees has chosen to selectively leak. How ironic! 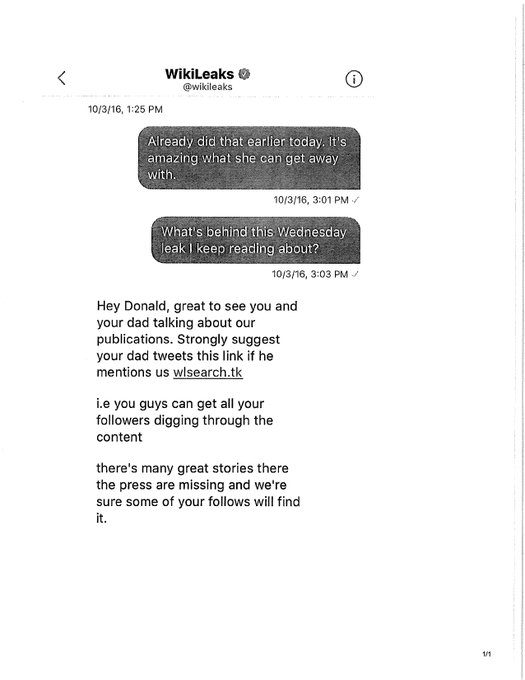 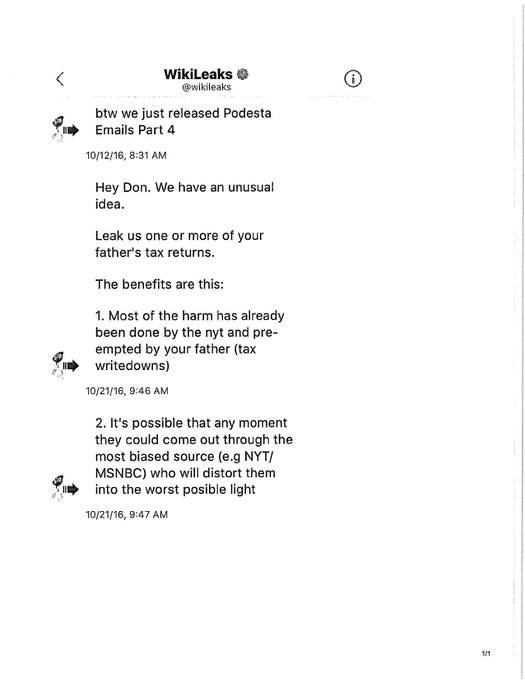 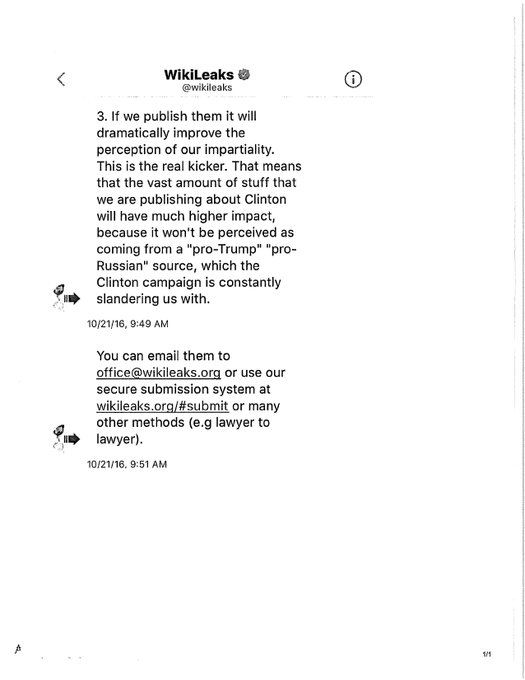 The email revealed today by CNN is part of a pattern of contacts by Russians and Russian cutouts seeking to coordinate with the Trump campaign with respect to information damaging to the Clinton campaign. On April 26, a Russian cutout told Trump campaign adviser George Papadopoulos that he had “dirt” on Hillary Clinton in the form of “thousands of emails.” On June 3, a friend of Trump Jr. told him that high-ranking Russian officials had damaging information on Hillary Clinton and requested Trump Jr. meet with Russians who had the information. On August 21, longtime Trump political adviser Roger Stone, who bragged about backchannel communications with Wikileaks, tweeted, “Trust me, it will soon the Podesta’s time in the barrel.”
Russia was clearly seeking the Trump campaigns cooperation in distributing and drawing attention to the hacked emails. And they got it: In the final month of the campaign, Donald Trump mentioned Wikileaks 164 times.

“The press is hardly even talking about Wikileaks. You now that. Wikileaks is amazing. The stuff that’s coming out, it shows she’s a real liar. She said, well, you have to say to the public and you have to say to your donors different things. Okay? The press doesn’t even pick this stuff up. You look at, where are you seeing it?,” Trump told Bill O’Reilly on October 11, 2016.

At a rally the next day, Trump said “one of the big advantages of me having a rather large microphone, and meaning a lot of people are listening, is that I can talk about Wikileaks and we are live, it’s amazing. Boom boom boom.” 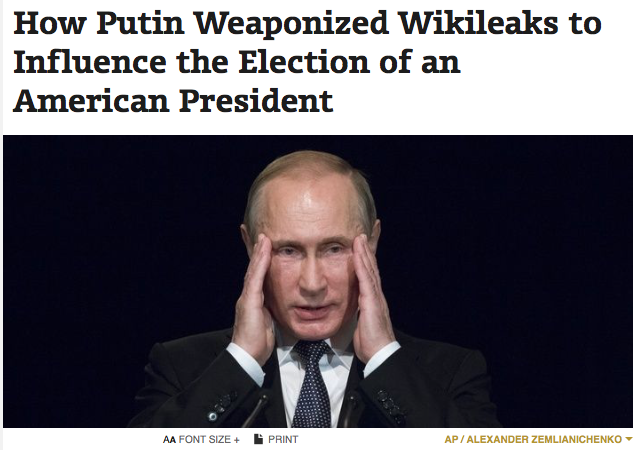 Edit: I can’t wait to see how /r/Wikileaks spins this. Their response to the Twitter messages between Wikileaks and Trump Jr. was laughable.

Edit 2: The /r/Wikileaks mods locked the thread and gave it a “Fake News” flair, in case you were wondering.

Editing one more time to add that WaPo is [now reporting](https://www.washingtonpost.com/politics/email-offering-trump-campaign-wikileaks-documents-referred-to-information-already-public/2017/12/08/61dc2356-dc37-11e7-a841-2066faf731ef_story.html) that these emails **were already publicly released** when the email to Trump was sent. CNN appears the have made an error in reporting that the email was sent on the 4th when it was in fact sent on the 14th.

some_asshat: So much for the supposed impartiality of Wikileaks and Assange.

onwisconsin1: Oh, shocking, they lied and hid information from investigators again. I can’t imagine why.

wyldcat: > Trump and Trump Jr received a Sept 2016 email from a man offering the hacked Wikileaks documents; Trump Jr told Hill he had no recollection of it.

>The email, which was described to CNN by multiple sources and verified by Trump Jr.’s attorney, came from someone who listed his name as ”Mike Erickson.” It was addressed to Trump, Trump Jr., Trump Jr.’s personal assistant and others, and turned over to Congress as part of the documents provided by the Trump Organization.

This was tweeted by Trump Jr the same day he received the decryption key and website:

WaPo updated the story and it seems to be a nothingburger after all. Please correct me if I’m wrong.

djnebula: > Hannity: “As far as this incident is concerned, this is all of it?”

Narrator: It wasn’t everything.

IraGamagoori_: So time for a quick timeline:

* April 2016: Russian contact gets in touch with Papadopoulos, tells him they have “dirt” on Clinton in the form of “thousands of emails”.

* June 2016: Cambridge Analytica contacts Wikileaks asking for the emails. CA offers to put them into a searchable database.

* August 2016: Roger Stone pulishes a tweet that shows he has knowledge of the contents of the unreleased Podesta emails.

* September 2016: Wikileaks sends Trump and Trump Jr. the decryption key to the emails. They somehow know their contact info.

* October 2016: Wikileaks tells Trump Jr. to tweet a link to the searchable database of Podesta emails. Jr does.

ryrybang: But, but, Trump Jr said [these were the only messages he received from Wikileaks](http://www.businessinsider.com/donald-trump-jr-wikileaks-messages-twitter-dm-2017-11)^^^these ^^^are ^^^quite ^^^damning ^^^on ^^^their ^^^own.

velveteenelahrairah: Live by the email, die by the email… somewhere, Hillary Clinton is grinning like the Grinch because Christmas came early this year.

awkwardinclined: The best part of waking up is treason in your cup

OfficialWhistle: Every time a new bombshell comes out I’m baffled by how sloppy these guys were. They left digital paper trails. I don’t know if they thought they wouldn’t get caught or if they were simply thinking they were above the law. Frankly, I don’t know which is worse.

I suspect there’s still a lot more Quid and Quo evidence to be seen first. The final straw will be the Pro that turns it into a Quid-Pro-Quo.

ActuaryWOBorders: Serious question. If Wikileaks is really acting as an arm of RIS, wouldn’t it be incredibly likely that any files downloaded by the Trump campaign from Wikileaks likely contained spyware that infiltrated their servers and networks.

I am very far from computer savvy, but it is interesting to think that Russia has a good amount of Trump campaign emails detailing any coordination or collusion and can hold those over Trump’s head to do their bidding partyofnogaku: So isn’t this an [FEC violation](http://www.factcheck.org/2008/03/overseas-fundraising-legal/)? … receipt of something of value from a foreign entity, akin to a donation of money from a foreign government? Take this with the assurances that sanctions would be lifted and the US stance on Russia’s annexation of Crimea, and isn’t this quid-pro-quo getting pretty clear?

tickandeklocka: Let’s see how creative they get when trying to defend this

piratelordking: They literally are the dumbest criminals in history.

Previous Post: « Execution of Daniel Shaver
Next Post: “The chief danger in life is that you may take too many precautions.” Alfred Adler »