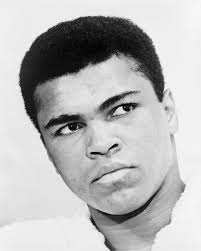 Quotes
Float like a butterfly, sting like a bee.
Don’t count the days, make the days count.
I hated every minute of training, but I said, ‘Don’t quit. Suffer now and live the rest of your life as a champion.’

Previous Post: « Anti-aircraft guns fire during air raids on Leningrad near St. Isaac’s Cathedral, 1941
Next Post: “Roam abroad in the world, and take thy…” Saadi Shirazi »