Drunk bro-local being a drunk bro-local. This guy was wandering around bugging everyone in a closed section for Press (he wasn’t allowed in but wasn’t stopped – thanks security). Then he kept telling this nice father and son that he would kill them. The dad only reacted after 15 minutes of badgering turned to the bro-local spitting on him. Then he went dad-mode thug-life and handled business to detain the belligerent man till the cops came. 4Lokos in public is like so totally chill brah.

nnagflar: He looks so confused like why is this happening to me?!

NewspaperNelson: I’ve been to music festivals and sat with all kinds of drug users and had zero problems, but as soon as a drunk dude shows up, everyone’s good time is ruined.

Jackvishs: I live in the city where this happened. Huntington Beach CA. And this kind of sh*t is constant. As soon as I opened it I was waiting to hear someone say “locals only”, the guy didn’t say it but he said “you’re not from here”. There’s a lot of events like this here as it’s been coined “Surf City USA” and it brings people from all over the country and the locals use it as a reason to start sh*t. Don’t get me wrong there has been instances where people from other areas have rioted and looted local businesses and stuff like that but still the people here are idiots.

7hriv3: Once you see he’s chugging a four loko you can use your imagination for the rest. That’s four lokos too many.

Umbra12: Guy spit on them and then swung first. Not seeing a problem here.

CivilDiscussions: Think the other 2 guys were arrested as well?

aBoyNamedWho: I may be getting soft in my old age.

But that was overkill. Quick punch and send him on his way.

brojangles: Four Loco. Not even once.

jimmyjazz2000: When he said “Imma Kill You,” I think he meant by infecting them with Hep C.

And between the spit on the feet and the blood on the knuckles, he may have successfully done so.

mikenice1: Everything in this video is annoying.

jewsonparade: This is only justice if you are a tryhard meathead.

-Dubwise-: He has a tramp-stamp and was drinking a four loco. Lmao!

kyleschreur: That was the most pathetic punch I have ever seen from a guy.

icedteahouseparty: This is the most Huntington Beach shit I’ve ever seen

Delirium101: Legally, the two guys may be in trouble with this video. While the drunk was clearly belligerent, he only spat at their feet while he was leaving. The two men, because they took moral offense, beat him. This was not self defense. While the drunk can and should be arrested for something like drunken disorderly conduct, the two men could also be arrested for aggravated battery.

This highlights one very important fact: the person most composed and able to talk to the police is generally the one not going to jail.

SilentSiege: 🙁 Just felt kinda sorry for him….. They may as well have been thumping a 6 year old….

Not_The_Truthiest: He take punches better than Ronda Rousey, that’s for sure… Jesus christ… took it like a champ. Even if he is a fuckwit.

thattalllawyer: He deserved what he had coming to him, but that still bummed me out quite a bit. It was like he finally realized the years have caught up with him and he can’t play the tough guy anymore without getting called on it (and stomped).

nvflip: I hate the locals only mentality that some have in HB.

redwormcharlie: We had a douche like this at a football game would not turn around and watch the game, kept turning to us and everyone talking shit on our home town team. Dude ended up starting a fight, got smashed and hauled out. The worst part was, he wasn’t drunk, he was just a giant dumb ass.

SamsungVR_User: Looks at that transfer.

StevenGaryStout: Why do people wait until it’s time to fight to Tell the VICTIMS to chill?! Why weren’t they yelling that at the asshole as he was acting up?

yslk: Surfing is such a beautiful sport, but with such a shitty culture. “You’re not from here” is a tragically common attitude amongst surfers, you’d be surprised.

bridgeheadprod: That’s embarrassing it took two big sober guys to take him on. And one got knocked over. And the skinny guy stood there taking blows like a champ. But that was beautifully filmed.

Capnjbrown: Saw the Four Loko and I already knew how this ended

Dreams-In-Digital: Why do people get so fucking butt hurt when a guy who starts shit gets what he has coming to him?

justinxduff: Lol how is this justice for spitting on their shoes? Wipe it off lol

[deleted]: None of them have ever been in a fight.

Mungo_Clump: Pay no attention to Wimp Lo, we purposely trained him wrong as a joke.

skoorbevad: Why did they punch the spokesman for Four Loko?

Xacto01: Imagine if all internet videos were at least this quality

do_it_for_tacos: It was the cheap shot that knocked him off

marktwain6522: His first mistake was the Four Loko

SvarteVinter: **I’M A SPOOKY SKELLINGTON WHO DON’T NEED NO SPIT**

RzK: Anyone see his lip slightly quiver like he’s about to cry but held it back?

banstaman: I was expecting he’d get tossed over the railing.

Entitled Woman gets fired for threatening to spit in peoples food 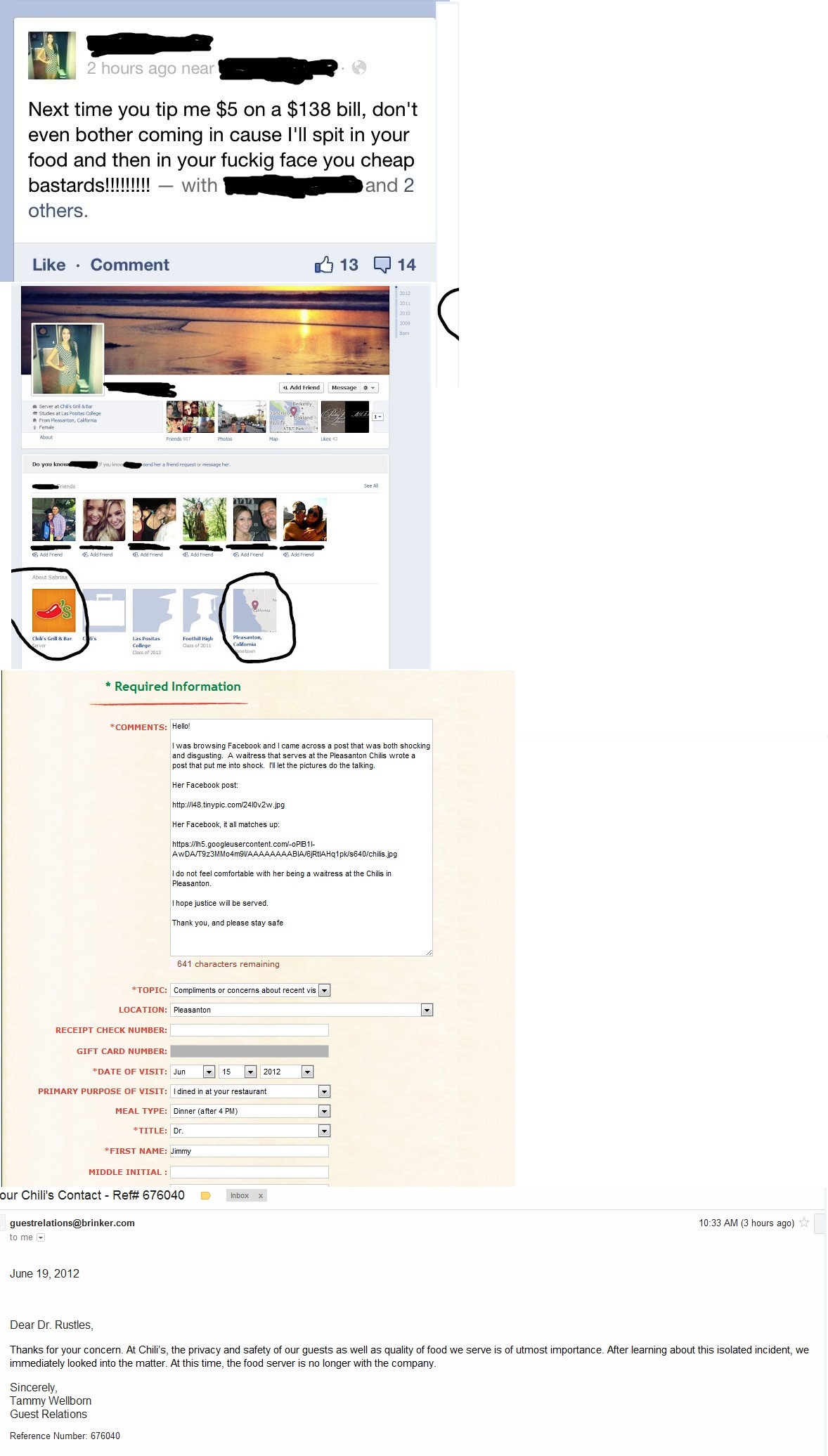 TheRenamon: how are you gonna spit in someone’s food based on the tip if they’ve already eaten.

Kasper-X-Hauser: But honestly. Chillis? Wouldn’t the spit probably improve it?

WhiskeyBreathYawn: You seem like the type of person that has a hard time making friends.

6millionwaystolive: A lot of people vent and talk like this about their job, coworkers, customers, etc. Jobs can suck (for example, getting $5 tip on a $138 bill) and venting frustrations to friends, family, and sometimes online isn’t really unheard of. OP, if you’re a person who likes to sabotage peoples way of income over a stupid facebook post that doesn’t concern you whatsoever, you are a special kind of loser.

Sivyen: Not all heroes wear capes… or maybe you do… I don‘t know what kind of kinky stuff you‘re into.

EarthBelongsToAnts: I’m so sick of servers and waiters feeling like they’re entitled to their tips. I worked dishes and line in a restaurant and I got no portion of the tips, while the servers and waitresses (which were also the hosts) would go home with $300 a night in untaxed tips, for fucking what? Talking to people? Bringing food to their table?

Tips shouldn’t be expected, they should be earned. The reason servers get paid way less than minimum wage is because they make way more in tips.

« A Group of Samurai in front of Egypt’s Sphinx, 1864
“If I am about to be executed, I would request that my body, in death, be buried not cremated…” Neil deGrasse Tyson »