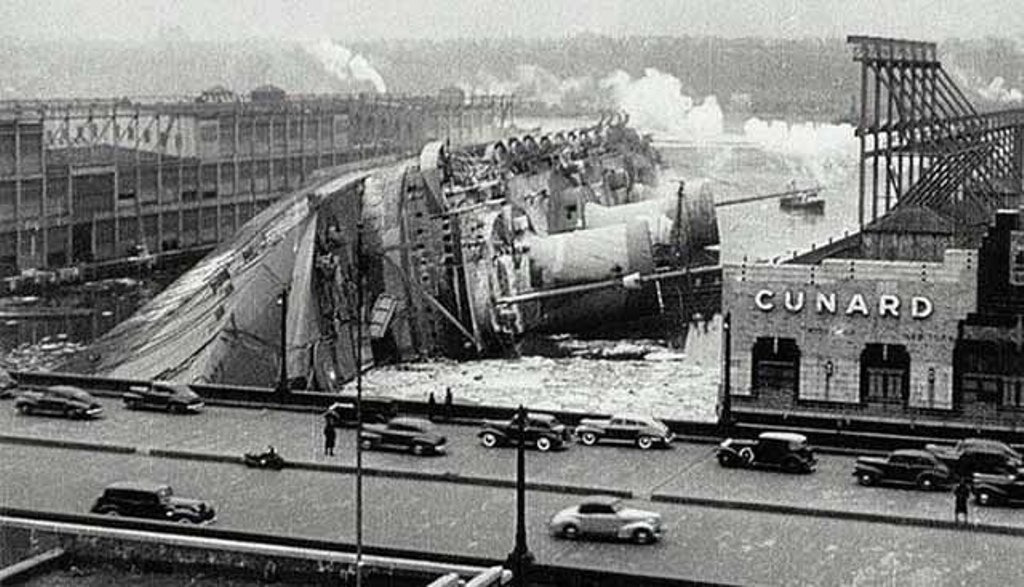 The Sinking of The S.S. Normandie At NYC’s Pier 88

On February 9, 1942 crowds gathered at New York City’s pier 88 to witness a spectacle. The largest ocean liner in the world was on fire. Fire fighting efforts successfully contained the fire after five and a half hours of effort, but the effort was in vain. Five hours after the flames were out the stricken vessel rolled onto its side and settled on the bottom of the Hudson.

The S.S. Normandie was a star crossed ship. Intended to be the pride of the French people, she was designed to be the height of shipbuilding technology and modern culture. Her first class passenger spaces were decorated in the trendiest Art Deco style and filled with luxuries. The radical new hull design, with a subsurface bulb beneath a clipper bow, and long, sweeping lines lent her previously untouched speeds while requiring far less fuel. She even had one of the earliest radar sets ever used by a commercial vessel, in order to improve the safety for her passengers.

Unfortunately, all of these modern touches availed her little. The Normandie was put into service during the height of the Great Depression. A sign of her future, on launching the wave she kicked up smashed into hundreds of onlookers, though no one was injured in this accident. Though she performed spectacularly during trials, she would never prove to be a particularly successful ship, only making just enough to cover her operating expenses and never paying for the loans needed to finance her construction.

The French declaration of war on Germany in September 1939 found the Normandie in New York, tied up alongside of pier 88. In spite of the loss of 28 American lives when a German u-boat torpedoed the Athenia on the first day of hostilities, the United States remained neutral. Authorities immediately put Coast Guard troops on board the Normandie and interned her in accordance with international maritime law. Though the French crew would remain aboard maintaining the vessel, she would remain motionless beside the pier, guarded by the Coast Guard, languishing until American entry into the war two years later.

Five days after the attack on Pearl Harbor, the French crew were removed from Normandie. France was technically a German ally under the Vichy government, and as such the U.S. exercised the right to seize the ship as belonging to an enemy belligerent. The ship would be renamed the USS Lafayette, in honor of the French General who had helped make U.S. independence possible during the revolution. The U.S. Navy took possession of the vessel and began her conversion as a troop transport.

Normandie_fireThe conversion was a rushed affair. The ship had originally been intended to set sail under the U.S. flag on the 14th of February, 1942. However, the sheer size of the ship as well as the complexity of its modern design had proved a substantial hindrance to the men performing the conversion. On the 6th of February it became clear that the conversion would not be completed on time, and the conversion crew requested that the sail date be pushed back two weeks. When this request was denied, the frenzied crew rushed into a frantic effort to complete the work on time.

Tragically, this haste set up the conditions for a disaster. Work spaces were not properly cleaned or prepared for lack of time to do it, and unsafe conditions became the norm. At 2:30 PM on the 9th, a welder in the first class lounge was performing work next to life preservers that should have been moved ahead of time. The work would ignite these life saving devices. The ship’s modern firefighting system should have prevented the tragedy, but it had been disabled during the conversion and was unavailable to be brought to bear. The New York Fire Department responded within 15 minutes, but were horrified to learn the French fittings on the Normandie/Lafayette were not compatible with their hoses. Less than an hour after the fire broke out, the ship was a raging inferno.

To fight the blaze firefighters employed fire boats on the port side of the ship, while firefighters used dockside hoses to tackle the flames to starboard. The fight to put out the fires took over five hours, but ultimately would prove successful. The fire would be declared to be out by 8:00 that evening.

Unfortunately, a new problem would be realized. The fire boats attacking the port side blaze pumped water at a far greater volume than was used by the dockside hoses to starboard. The Normandie was listing heavily to Port, submerging a number of open portholes on that side. The Navy attempted to counterflood to right the list, pumping water into the starboard side so that the ship would settle evenly, but this proved fruitless. At a quarter till three, the Lafayette rolled over on her side and settled into the mud of the Hudson River’s bottom.

In the course of the tragedy, 285 people would suffer injuries ranging from smoke inhalation to burns. One Brooklyn native, Frank Trentacosta, would die in the tragedy. The Normandie herself would remain on the bottom for a year and a half, finally being righted and floated in August of 1943. A survey revealed her to be too badly damaged to be salvageable, and she would be sold and broken up for scrap in 1946.

The loss of the Normandie alongside of New York’s pier 88 would in many ways mark the end of an era. While ocean liners would remain the principle means to cross the Atlantic until commercial jet liners became available, few liners would be constructed in the post war period. None of these ships would approach either the speed or size of the Normandie. The last dedicated ocean liner to be constructed, the Queen Elizabeth II would hit the water in 1969. Most liners would eventually be removed from service to be converted into cruise liners for tourist jaunts, though a few stubborn holdouts would remain. Today only one ship continues to run the route of the old ocean liners. Constructed as a cruise ship, the Queen Mary II was launched in 2003 as a means by which tourists can attempt to recapture the experiences of the luxurious passages the Normandie had been constructed to provide.