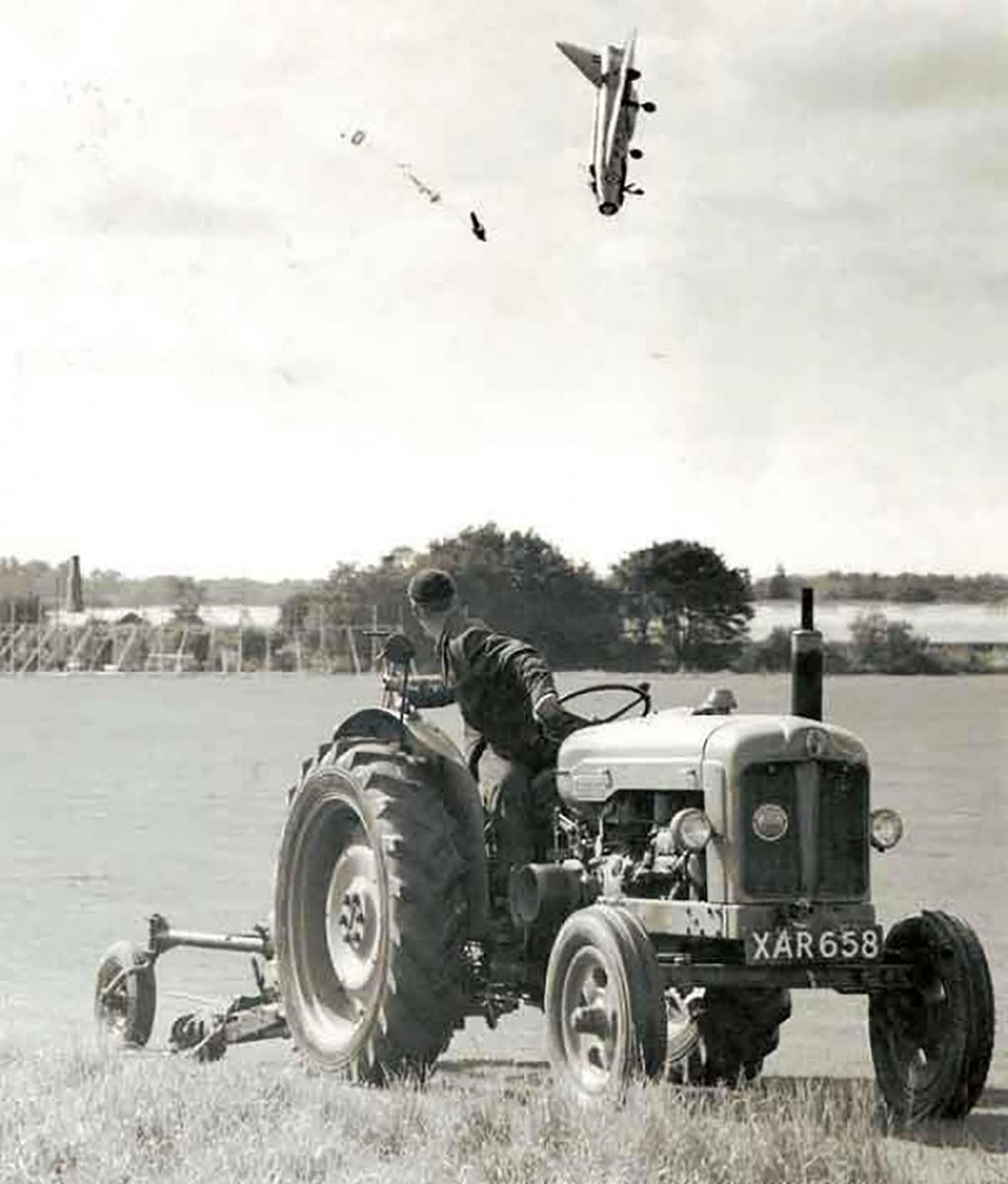 fhtagnfhtagn: So was someone taking a picture of the guy on his tractor when he happened to get this shot?

Reporter_at_large: “…the story of the photograph on the 19th of September in 1962. That day, George Aird was in the Lightning doing a demonstration flight off of the south coast. He was approaching Hatfield from the north east when he realised there was trouble.
ASN Aircraft accident 13-SEP-1962 English Electric Lightning F1 XG332… Whilst carrying out a demonstration flight, there was a fire in the aircraft’s reheat zone. Un-burnt fuel in the rear fuselage had been ignited by a small crack in the jet pipe and had weakened the tailplane actuator anchorage. This weakened the tailplane control system which failed with the aircraft at 100 feet on final approach. The aircraft pitched up violently just as Aird was coming up to land. Aird lost control of the aircraft and ejected.
Luckily, because the nose pitched up he had just enough time to eject.
The tractor driver was 15-year-old Mick Sutterby, who spent that summer working on the airfield. He wasn’t posing for the camera. In fact, he was telling the photographer, Jim Mead, to move on, because he shouldn’t be there.
Mead saw the plane coming in and the nose pitch up. Then Aird ejected and Mead says he had just enough time to line up the shot as the Lightning came down nose first.
Meanwhile, George Aird landed on a greenhouse and fell through the roof, breaking both legs as he landed unconscious on the ground. The water from the sprinkler system for the tomatoes woke him. He’s reported to have said that his first thought was that he must be in heaven.
The photographs taken that day first went to the Ministry of Aviation. Once they were released, Mead sold them to the Daily Mirror.
It was featured as a centre page spread in the newspaper on the 9th October 1962.
Jim Meads is a Mirror reader who was trying to amuse his two children, Paul, 4, and Barry, 3, by taking a picture of them as the Lightning was coming in to land at the De Havilland airfield near their home at Hatefiled, Herts.
The Daily Mirror paid Mead £1,000 for the rights to the photograph: £18,000 by today’s standards. In my opinion, he deserved every penny.”
… https://fearoflanding.com/photography/the-story-behind-an-unbelievable-photograph/

RoadRunner71: Cool picture, it’s like the cover of a fifties B movie or cheap novel about the Cold War paranoia.

rasmusdf: That’s a Ford Power Major – my dad had one of those. Great tractor – I drove it as a kid. But no roll cage. I wouldn’t let my kids drive it.