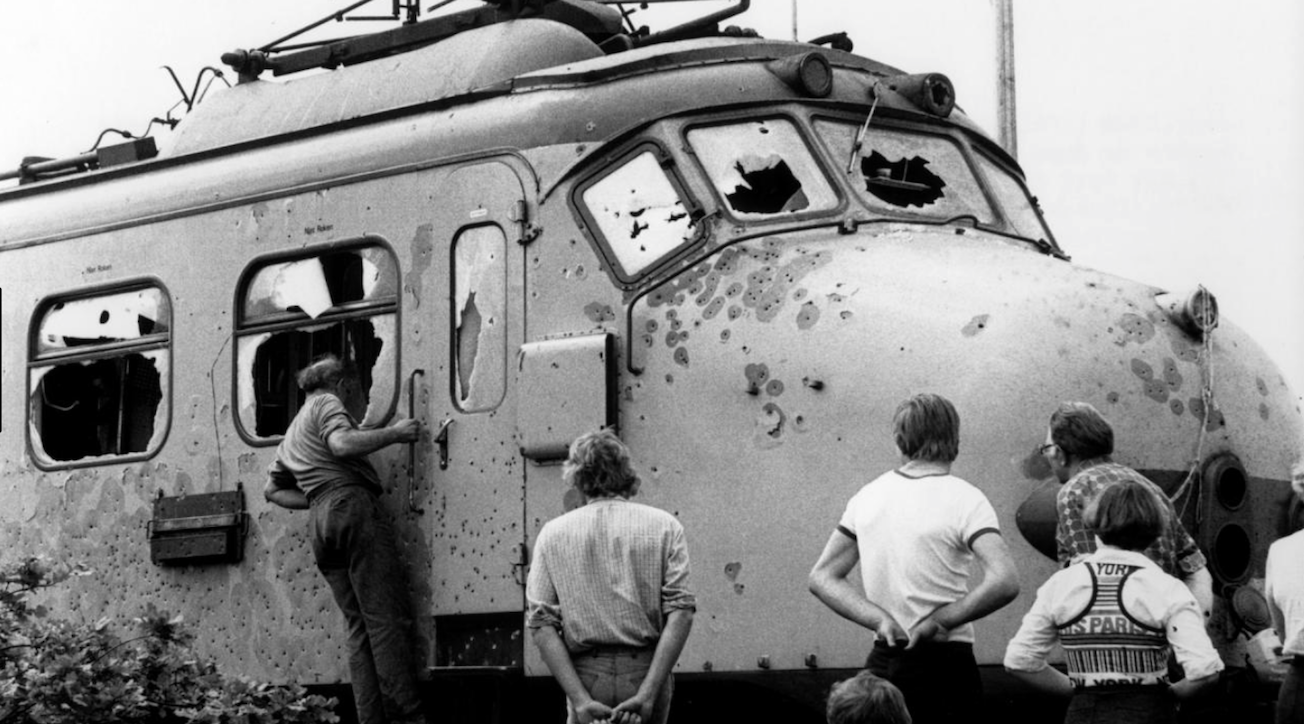 “On May 23 1977, a train hijacking took place at de Punt, northeastern Netherlands. 9 armed Moluccans pulled the emergency brake around 9 AM and took about 50 people hostage. The hijacking lasted for 482 hours/20 days; two hostages and six hijackers were killed.

At the same time 4 other South-Moluccans took hostages (105 children and 5 teachers) at an [elementary school in the village of Bovensmilde.”] (https://en.wikipedia.org/wiki/1977_Dutch_school_hostage_crisis)

“With these combined actions the hijackers wanted to force the (recently resigned) Dutch government to keep their promises about their RMS, break diplomatic ties with the Indonesian government and release 21 Moluccan prisoners involved in the [hostage actions in 1975.] (https://en.wikipedia.org/wiki/1975_Dutch_train_hostage_crisis) An ultimatum was set for May 25 at 14:00 (2 pm) with the hijackers threatening to blow up the train and the school. The hostages were forced to help blinding all the windows so for a long period nobody knew about what happened inside the train; it was only near the end of the hostage taking that electronic eavesdropping devices were installed by marines. About 2000 marines and soldiers were stationed both at the train and the school.”

“After the ultimatum expired, the hijackers announced new demands; They wanted an airplane from the airport of Schiphol and to fly out with the 21 to be freed prisoners, the five teachers, and all hijackers. By means of electronic eavesdropping, Dutch government knew that the hostages were not in danger, so the government let this second ultimatum pass as well.

On June 11, 1977, almost three weeks after the start of the hijacking, six F-104 Starfighter’s flew low over the train at 5:00 AM with the purpose of disorienting the hijackers and also make the hostages duck down to the floor of the train where they would be relatively safe. Then marines of a special anti-terrorist unit started shooting at the train; an estimated 15,000 bullets were shot at the train. The marines aimed at the first class and in-between compartments with the doors because they knew these were the areas where the hijackers were hiding. One of the hostages killed was in such a compartment because she had been allowed there by the hijackers. Six hijackers were killed.”

“3 hijackers survived and were later convicted to sentences from six to nine years. In 2007 there was a memorial service for the killed hijackers; the Moluccan community never offered any apologies, but two of the hijackers, motivated by a conversion to Christianity, had a meeting with former victims in 2007.”

“According to official sources, six of the hijackers were killed by the crossfire of bullets shot at the train. However many Moluccans believe that they were killed deliberately. On 1 June 2013 it was reported that an investigation by journalist Jan Beckers and one of the former hijackers, had concluded that 3, and possibly 4, of the hijackers were still alive when the train was stormed, and were executed by marines. In November 2014, it was revealed that the Justice minister at the time, ordered that none of the hijackers were to leave the train alive. An in-depth investigation of the government, of which the results were published in November 2014, concluded however that no execution has taken place, but there were in fact unarmed hijackers killed by marines. “

In 2014 relatives of some of the killed hijackers filed a [lawsuit against the Dutch state,] (https://nltimes.nl/2014/11/05/train-hijackers-families-sue-dutch-excessive-force-claim) claiming that excessive force was used when the hostage situation was ended. In 2017 a Dutch court ordered an in-depth investigation to determine as clearly as possible what happened in the train. In May 2017, the Dutch government released the transcription of sound recordings in and around the train. In September and October a total of 11 former soldiers in the action anonymously testified in court in The Hague. A soldier testifying under the code 2C admitted in court that he shot a female hijacker at close range. Two former soldiers who were involved in the action told the Volkskrant in October that wounded hijackers were unnecessarily executed and the government gave the instructions for, and approved, the attack. They also stated that the testifying soldiers and the government made agreements about what they would say in court. A spokesperson for the Ministry of Defence told the newspaper that “there was no instruction from the State to the soldiers that were questioned.” [Source] (https://nltimes.nl/tags/de-punt-train-hijacking )