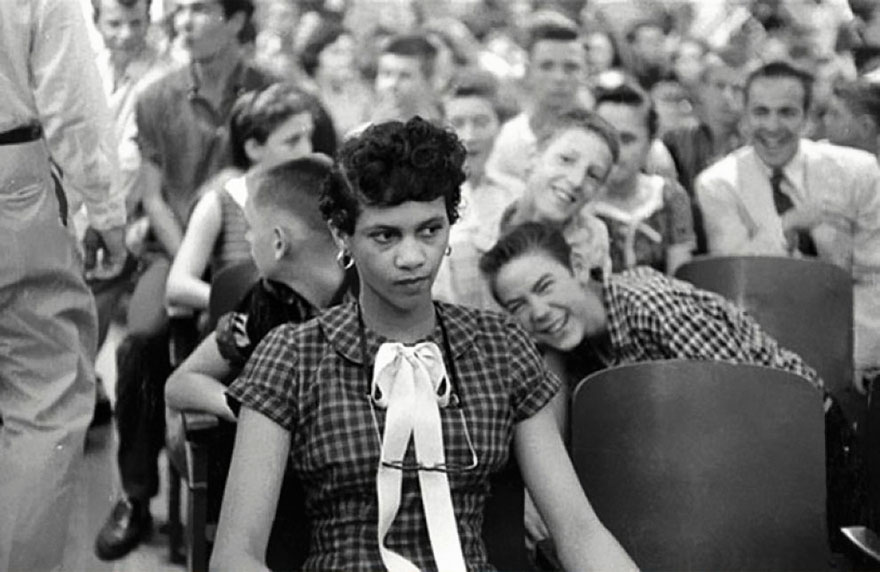 **Story behind the picture**

This picture was taken the morning of Sept. 4, 1957. That week four black students integrated the Charlotte schools. Three of the four made it to class peacefully. The fourth was Dorothy Counts at Harding High.

That’s Dorothy in the middle, headed for Harding’s front door. She’s 15 years old. Her grandmother made that red-and-yellow dress. Dorothy’s grandmother always made her a new dress for the first day of school.

The dress has spit on it.

The crowd has followed her all the way down the block. Every so often, something flies toward her: a stick, a chunk of ice, a balled-up milk carton. The students scream at her to go back home.

This picture is famous. It ran on the front page of the Observer and was published all over the world. You can read so much in the eyes, the faces, even the clothes – look at that bow on Dorothy’s dress, pointing up at her face like an arrow.

Still, in this frozen moment you can’t quite tell who’s doing what. Stare as long as you want but you can’t see all the way inside, can’t tell who’s leading the charge and who’s just watching.

But some people know.

And some of them still live scattered around Charlotte. Ronnie Hall. Marty Wilson. Woody Cooper. Dorothy Counts herself. (These days she goes by Dot Counts-Scoggins.)