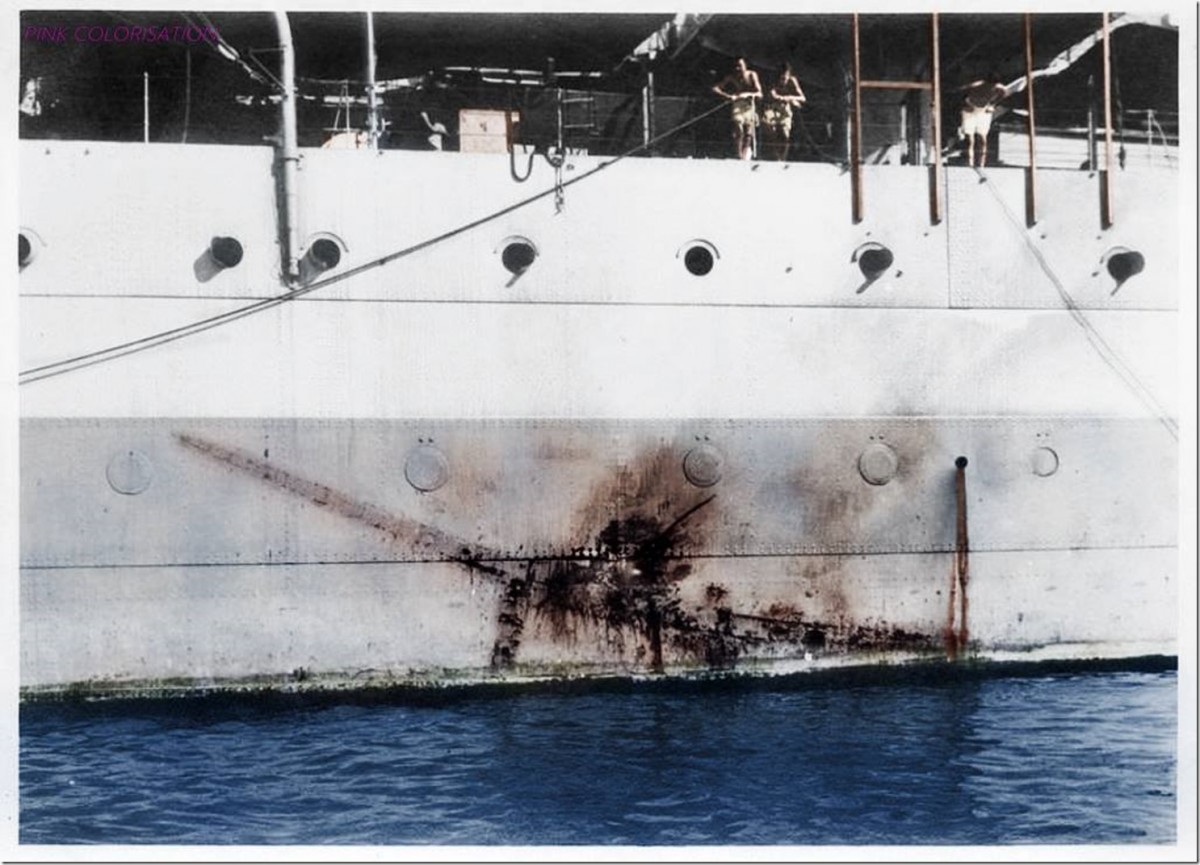 mojohand2: The Sussex was a heavy cruiser. Looks like the kamikaze hit right on its 4.5′ armor belt.

kgunnar: It’s like the silhouette a bird leaves when it hits a window.

>In 1945 I was serving in cruiser HMS Sussex. My ship was part of a task force (Operation Livery) in action at Phuket Island in what is now Thailand.

>The Japs attacked us with suicide planes, one of which hit us and another struck and sank HMS Vestal. She was a minesweeper and was Camberley’s adopted warship. She was the last British warship to be sunk during WW2…

>…then proceeded to Singapore to help with the liberation there. We were the first major British warship to enter Singapore Harbour. On 5th September the Japs signed the Surrender Documents aboard “Sussex”. There was much jubilation and satisfaction. However, this was to be shortlived.

>When we tied up alongside we were shocked to see hundreds of ex-POWs on the jetty. They had walked out of the prison camps and were waiting for us. Most were in pitiful condition, starving and dressed in rags and many were very sick. I was just 18 and most of my shipmates were young lads. It was very traumatic and frightening. There were no counsellors then and it was up to us to do what we could for these poor men of all nationalities.

>We helped to get them on board, most of them were crying with relief and happiness, whilst we were crying with compassion. We then arranged food, clothing, medical attention, cigarettes etc. We also helped them write letters home. Unbelievably sickening…

Cranky_Windlass: I wonder how much damage that one plane did…. hull seems only a bit bent near the waterline

Hippo_Singularity: It was a Mitsubishi Ki-51, not a Zero. Awesome find, nonetheless.

_ElBee_: That *kamikaze* aircraft that hit the ‘Sussex’ was not a Mitsubishi A6M Zero. The *kamikaze* was [identified](https://en.wikipedia.org/wiki/HMS_Sussex_(96)#Pacific_theatre) as a Mitsubishi Ki-51 ‘Sonia’ two-seat light bomber, which had [a fixed undercarriage](http://vignette3.wikia.nocookie.net/world-war-2/images/a/a2/Mitsubishi_Ki-51-I.jpg). You can see the fixed undercarriage imprinted on ‘Sussex’s hull as well, below the wings; [the Zero had a retractable undercarriage](http://www.aviation-history.com/mitsubishi/a6m-7a.jpg).

bnr55: Is it certain that this was a Zero? Looks like perhaps this was an aircraft with fixed landing gear, a [Val](http://upload.wikimedia.org/wikipedia/commons/5/54/D3A1_Akagi.jpg) perhaps?