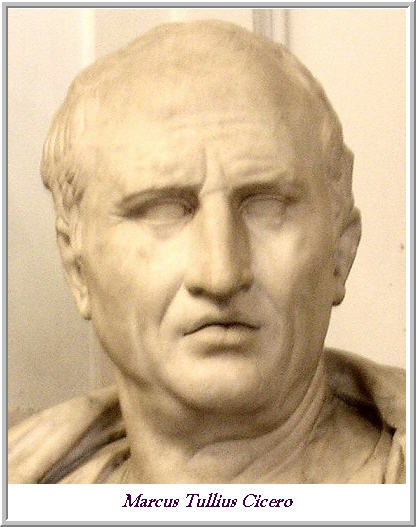 Marcus Tullius Cicero was a Roman politician and lawyer, who served as consul in the year 63 BC. He came from a wealthy municipal family of the Roman equestrian order, and is considered one of Rome’s greatest orators and prose stylists.
Born: January 3, 106 BC, Arpino, Italy
Full name: Marcus Tullius Cicero
Assassinated: December 7, 43 BC, Formia, Italy
Influenced by: Aristotle, Plato, Lucretius, Demosthenes, Polybius, Isocrates, Panaetius, Posidonius, Chrysippus

Quotes
A room without books is like a body without a soul.
If you have a garden and a library, you have everything you need.
While there’s life, there’s hope.

Previous Post: « “Do not ask your children strive for extraordinary lives …Make the ordinary come alive.” William Martin
Next Post: “If people are good only because they fear punishment, and hope for reward, then we are a sorry lot indeed.” Albert Einstein »