2017 has been a year of unrelenting bias, unfair news coverage, and even downright fake news.

And without further ado… here are the winners, as provided by GOP.com: 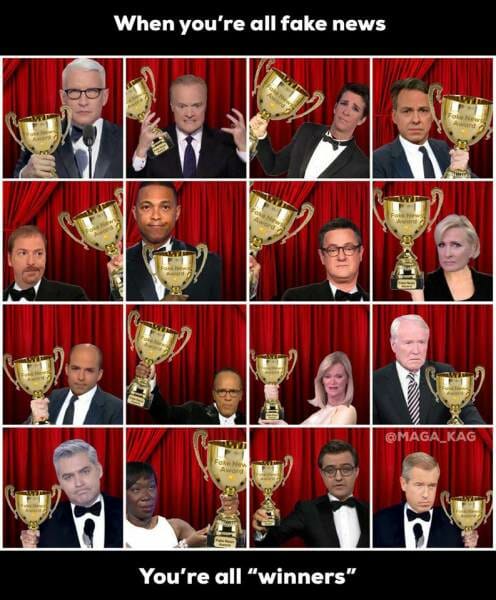 2017 was a year of unrelenting bias, unfair news coverage, and even downright fake news. Studies have shown that over 90% of the media’s coverage of President Trump is negative.

Below are the winners of the 2017 Fake News Awards.

1. The New York Times’ Paul Krugman claimed on the day of President Trump’s historic, landslide victory that the economy would never recover. .@DaveWeigel @WashingtonPost put out a phony photo of an empty arena hours before I arrived @ the venue, w/ thousands of people outside, on their way in. Real photos now shown as I spoke. Packed house, many people unable to get in. Demand apology & retraction from FAKE NEWS WaPo!

7. CNN FALSELY reported about Anthony Scaramucci’s meeting with a Russian, but retracted it due to a “significant breakdown in process.” 9. CNN FALSELY reported that former FBI Director James Comey would dispute President Trump’s claim that he was told he is not under investigation. 10. The New York Times FALSELY claimed on the front page that the Trump administration had hidden a climate report.

(via WashingtonPost.com)
11. And last, but not least: “RUSSIA COLLUSION!” Russian collusion is perhaps the greatest hoax perpetrated on the American people. THERE IS NO COLLUSION!

While the media spent 90% of the time focused on negative coverage or fake news, the President has been getting results:

1. The economy has created nearly 2 million jobs and gained over $8 trillion in wealth since the President’s inauguration.

2. African Americans and Hispanics are enjoying the lowest unemployment rate in recorded history.

3. The President signed historic tax cuts and relief for hardworking Americans not seen since President Reagan.

5. The President has unleashed an American energy boom by ending Obama-era regulations, approving the Keystone pipeline, auctioning off millions of new acres for energy exploration, and opening up ANWR.

6. ISIS is in retreat, having been crushed in Iraq and Syria.

7. President Trump followed through on his promise to recognize Jerusalem as the capital of the State of Israel and instructed the State Department to begin to relocate the Embassy.

8. With President Trump’s encouragement, more member nations are paying their fair share for the common defense in the NATO alliance.

9. Signed the Veterans Accountability and Whistleblower Protection Act to allow senior officials in the VA to fire failing employees and establishes safeguards to protect whistleblowers.

“…President Donald Trump’s much ballyhooed ‘Fake News Awards’ has drawn attention from a group beyond the usual peanut gallery: ethics experts who say the event could run afoul of White House rules and, depending on what exactly the president says during the proceedings, the First Amendment,” reported Politico.

Tonight, we can officially say CNN is the best Fake News network in the world – meaning whatever you see on CNN, don’t believe it.
President Trump’s Fake News Awards is better than watching a boring Oscar Awards.

Here are the four awards won by CNN:

7. CNN FALSELY reported about Anthony Scaramucci’s meeting with a Russian, but retracted it due to a “significant breakdown in process.”

[…]9. CNN FALSELY reported that former FBI Director James Comey would dispute President Trump’s claim that he was told he is not under investigation.

Only two senators out of 100 attended, both Dems

Flake, dubbed Jeff “Snow” Flake by President Trump, made the remarks before an empty Senate chamber Wednesday blasting Trump ahead of his highly-anticipated Fake News Awards.

“It is a testament to the condition of our democracy that our own president uses words infamously spoken by Joseph Stalin to describe his enemies,” Flake said, referring to a tweet where Trump called five fake news outlets “the enemy of the American people.”