Sabotaging EPA: Scott Pruitt has muzzled science and his dissenters | Workers objecting to EPA’s polluting-inclined plans may be further intimidated. So, beware. America’s “enviro-thought” police are watching, listening and reading. Definers is a front for conservative operatives who run America Rising PAC. That is of profound concern to EPA employees who oppose Administrator Scott Pruitt’s anti-science agenda and his “back-to-basics” mandate benefitting fossil fuel polluting industries.

For the last year, America Rising has targeted scientists, engineers, attorneys and others who work at EPA and disagree with Pruitt, many of whom are members of AFGE National Council of EPA Locals #238 (AFGE Council 238).

Since February, America Rising has issued over 40 Freedom of Information Act (FOIA) requests to obtain records from EPA dissenters nationwide. Their Twitter feed boasts “by their nature, FOIA requests are actually very democratic and transparent.” And, that since 2013, America Rising submitted “more than 4500 FOIAs. That’s a lot of documents obtained.”

Previously, EPA awarded research contracts to non-political firms. But Definers/America Rising have formidable conservative ties. Now, they have access to EPA management to intimidate federal employees and stoke hostile workplaces. Using taxpayer money, these bounty hunters continue monitoring public employees at U.S. EPA who took an oath to protect the health and safety of all Americans.

Under these conditions, the term “Orwellian” comes to mind. The government is censoring EPA websites of information about climate change and related pollution risks to public health. Currently, those hired guns at Definers are monitoring the dedicated watchdogs who know what information is being withheld, and are disputing it. Somehow seemingly unbeknownst to the EPA administrator, Congress gives the EPA workforce the authority to enforce environmental standards, champion scientific integrity and often speak out about it.

“Nineteen Eighty-Four” was written in 1949 when American and British troops fought and died protecting the world from fascism. Nearly 70 years ago, Orwell warned us about totalitarianism in other (nascent communist) states.

America had already shed too much blood fighting the authoritarian scourge and banished any chance the “thought police” would take up residence in the “land of the free and the home of the brave.”

Yet, in 2017, we object to Pruitt’s “Orwellian” activities, reminiscent of sordid regimes accepting surveillance, enabling thought control and rationalizing the language of lies that normalizes them. This time, even more objectionable and distasteful is that our clean air and water is being put at risk. They are privatizing our public resources and permitting them to the highest bidder.

Pruitt’s deliberately obscures and distorts, or reverses the meaning of words and directives about public health and environmental safeguards at U.S. EPA.

When science is destabilized, biased or directed to advantage polluting industries, 300 million Americans’ health and safety is jeopardized.

Pruitt’s EPA is spending taxpayer money on political operatives to discourage mainstream news reports about the agency and monitor federal EPA employees who speak out.

In one case, the name of an EPA employee/union leader appeared in the press protesting EPA budget cuts. About a week later, America Rising launched an investigation into that employee’s email account. Workers objecting to EPA’s polluting-inclined plans may be further intimidated. So, beware. America’s “enviro-thought” police are watching, listening and reading.

Ongoing, Pruitt weakens regulations and deprives EPA of the budget and staffing needed to protect human health and the environment. Hiring a firm that profits by supporting the dismantling the U.S. EPA and establishing a “war room” is un-democratic. Pruitt’s tactics reek of impropriety, and are the latest in a political transformation that began Jan. 20, 2017, when President Trump signaled his administration would side with polluters.

EPA’s mission is not to undermine the work of our government’s engineers, regulators, scientists or union representatives ensuring that all Americans are safe. Orwell said, ”To see what is in front of one’s nose needs a constant struggle.” This Administration is eroding our ability to be outraged, attacking science and truth until no one trusts accurate data, and is stifling the courageous from speaking out. Trump: Coal is the future! Talking about climate change in Orwellian doublespeak doesn’t make it go away | while Trump and his political acolytes are playing word games, the real-life effects of climate change are being observed and felt at other levels of government.

Well, it sucks to live in America because there is nothing we can do to stop the corporate machine to make money at all costs. The passing of the Rich Guy’s Tax Break bill just made me lose any hope in our government ever doing something that will benefit anyone except the rich.

The Growing Movement to Take Polluters to Court Over Climate Change. As climate liability lawsuits rise, industry forces are fighting back. There’s a vast conspiracy afoot to decimate American manufacturing. Wealthy environmentalists and greedy attorneys are trying to stuff their already-fat pockets by suing defenseless companies over their contributions to global warming. They allege that energy manufacturers create a “public nuisance” by emitting greenhouse gases and are liable for the damages this causes. Worse, they disguise themselves as do-gooders: They represent plaintiffs like Alaska Native American tribes who are losing their frozen land to warming temperatures, and communities impacted by sea-level rise. But these con artists aren’t really trying to save the planet. They’re trying to put American companies out of business. 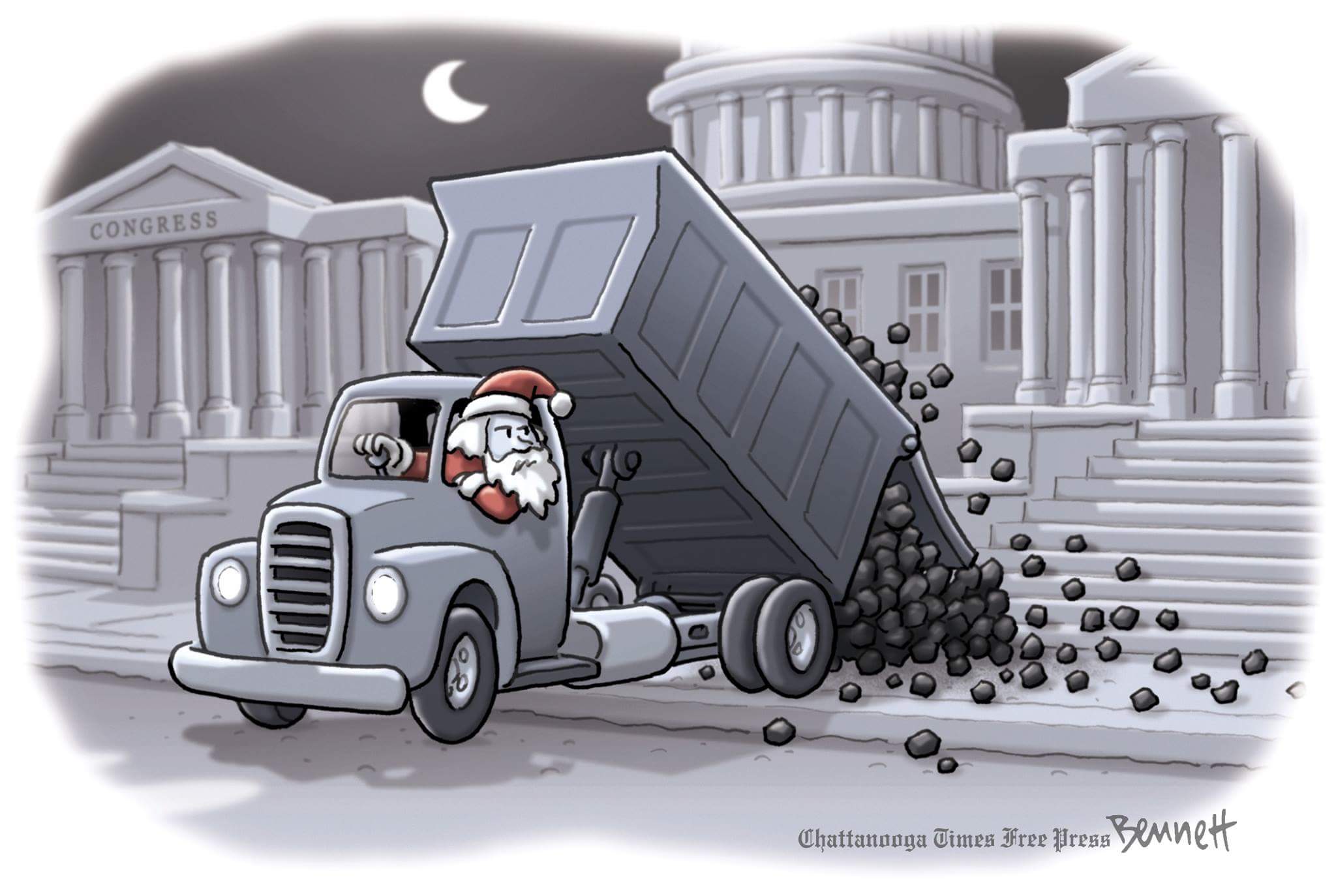 phpdevster: > A spokeswoman for the Interior Department told the Post that the decision to reduce the number of researchers who could attend the conference hinged on a desire to save taxpayer money.

> The Obama administration’s past decisions to allow more scientists to attend the conference signaled the administration’s “addiction to spending,” the spokeswoman said, according to the Post.

No problem using a taxpayer funded government position to spread propaganda, but paying for scientists to attend a conference is “wasteful”. Right.

wowwoahwow: What else would you expect? Truth does not fit their agenda…

eruthered: Part of a scientist’s job is to present, publish and receive peer review of their work. Government scientists are obliged to make their work available to the public and conferences are how this gets done. Limiting conference attendance started with Obama and is now worse under Trump. This should not be a political issue at all. This is not about government waste as it is part of a scientists job.

Boycott and Divest from Plutocrats?

Has anyone discussed the possibility to apply pressure to the donors behind the terrible tax bill that mainly benefits the super-rich?

Could boycotting and divesting from their businesses edit: and nonprofits be effective? And could social media shaming be effective?

Elitist_Plebeian: Vote against politicians who sell out their constituents. The big donations won’t do them any good if they can’t hold onto their seats.

tiddeRtime: I say that it’s never a bad idea to limit investments to those companies whose policies you support. I sold all my verizon and ATT stock for that very reason. I don’t give a shit how much money I was making in dividends, I hate them more than it’s worth.

pku31: Divestment is unlikely to be effective in general, because of the efficient market hypothesis (basically, if you divest enough that stock goes down, someone less scrupulous buys until it’s back at the “correct” level).

Boycotts are pretty ineffective at the best of times – they can sometimes work if you have a specific target and goal (e.g. boycott company x until they stop doing y). “Boycott plutocrats” is neither.