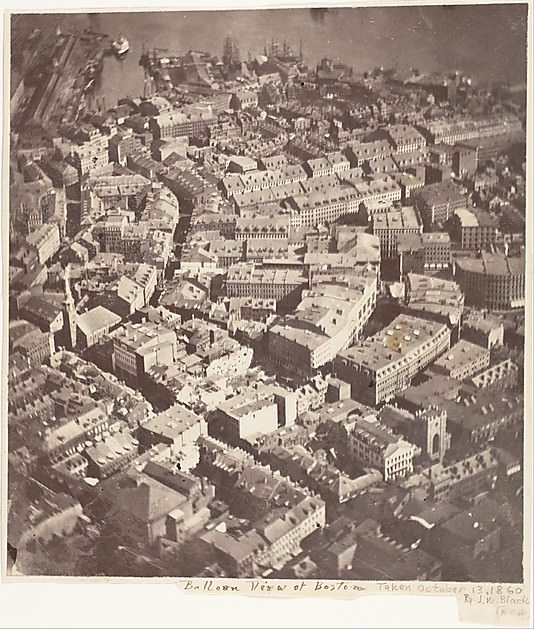 J.W. Black’s ‘Boston as the Eagle and the Wild Goose See It,’ was taken from a balloon above Boston Common.

On October 13, 1860, pioneering photographer James Wallace Black took the earliest surviving aerial photograph in the United States, shown above, from a hot air balloon floating above Boston Common. Recognize what you’re looking at?

If not, Oliver Wendell Holmes, the poet and Harvard medical professor who gave the photograph its title, “Boston as the Eagle and the Wild Goose See It,” described it in The Atlantic Monthly. (The bracketed edits are from the Met in New York, where the photo is held, and from which the quote is taken.)

Boston, as the eagle and wild goose see it, is a very different object from the same place as the solid citizen looks up at its eaves and chimneys. The Old South [Church] and Trinity Church [left center and lower right] are two landmarks not to be mistaken. Washington Street [bottom] slants across the picture as a narrow cleft. Milk Street [left center] winds as if the old cowpath which gave it a name had been followed by the builders of its commercial palaces. Windows, chimneys, and skylights attract the eye in the central parts of the view, exquisitely defined, bewildering in numbers…. As a first attempt [at aerial photography] it is on the whole a remarkable success; but its greatest interest is in showing what we may hope to see accomplished in the same direction.

Holmes’s intuition that aerial photography had a long way to go proved prescient, of course, as Google’s official blog noted on the photo’s 150th birthday. “We at Google owe James Wallace Black a debt of gratitude; without his early experimentation with aerial imagery, Google Earth may never have come to be.”

If you’re still having trouble reconciling the photo with today’s Boston, that’s because much of what’s shown burned down in the Great Fire of 1872. Compare to the more familiar landscape today, thanks to the wealth of aerial photography Google now has on hand.

The first flight of an untethered hot air balloon—humanity’s first really successful attempt at flight
took place in 1783 when “Pilâtre de Rozier and the Marquis d’Arlandes” flew over Paris. The first real photograph was taken in 1826 when Joseph Nicéphore Niépce took a picture out of his window. It took more than 30 years for someone to put these two inventions together to bring us the world’s first photo from the air. That photo, an 1858 aerial image of Paris, France, captured by Gaspard-Félix Tournachon is no longer with us.

Here is a comparison of old and new with the church as a reference point- http://i.imgur.com/zyqrFtb.jpg

This still looks more modern than half of the world right now.

Previous Post: « View from a German Panther Tank, 1944.
Next Post: B-25s from the 447th Squadron of the 321st Bombardment Group passed very near the erupting Vesuvius on their way to bomb targets. 1944 »