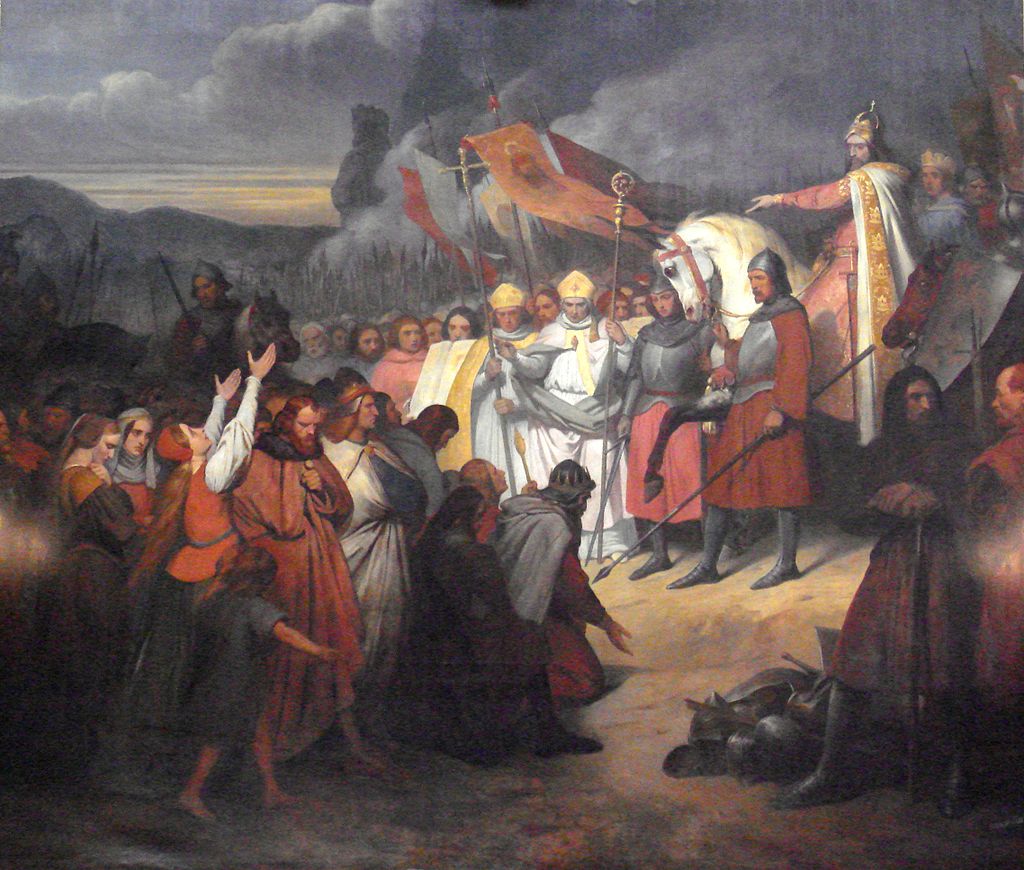 What exactly do you mean by “professional” in this case? The Carolingian army wasn’t a standing army by any means. At its most basic the Carolingian war machine functioned via yearly levies of both aristocrats and their direct supporters on the one hand and of “freemen” on the other. Freemen would owe fines if they didn’t show up, for instance, but again these are not professional soldiers but rather men who are expected to keep weapons as part of their (legal)status as free Franks. A yearly muster is referenced many times in the *Royal Frankish Annals* where the army (or armies in many cases) would gather in the spring and then be dispatched.

It also wasn’t professional in the sense of career soldiers, unless, I suppose, you want to broadly paint the aristocracy as such, but in that case there is little to distinguish them from later counterparts. On the whole armies were supported not by “wages” but by spoils, this is one reason why pitched battles seem fairly rare in the Carolingian annals and instead we see a focus on “wasting” and “sacking” enemies such as the Saxons, Avars etc. Plunder would trickle down from Charlemagne to his highest aristocrats and so forth down the line.

That being said, there is also reference to payment meant to support the army, something like a living wage presumably. Specific capitularies (legislative codes essentially) reference a “fine” (or a tax I suppose) being levied on various property levels that would be used to support the “host.” In this was we can see that the efforts to centralize and actively legislate and maintain the realm lend it a more “professional” feeling than later armies might have.

Likewise, those holding land from the king/emperor would be expected as part of the arrangement to supply soldiers as well. So, for instance, the so-called *Capitulary for the Missi on Mobilizing the Army* issued in 808 states that:

>Every free man who has four *mansi* [a unit of land] of his own property, or has a benefice from anyone [land granted as gift or in return for service], shall equip himself and go to the army, either with his lord, if the lord goes, or with his count. He who has three *mansi* of his own property shall be joined to a man who has one *mansus*, and shall aid him so that he may serve for both.

We also have legislation (capitularies) that reference a system by which villages would be required to band together in order to support a specific number of soldiers without denuding themselves of able bodied men for the harvest (always a concern). So, for instance, In these cases, for instance, 5 families would be required to arm and support a sixth person while to went off to fight. The *Capitulary on a Variety of Subjects* (great name!) from 807 states that:

>If it shall be necessary to furnish aid against the Saracens of Spain, or the Avars, then five of the Saxons [by this point part of the Empire] shall quip a sixth.

So where the Frankish advantage comes from is a combination of a fairly (for the period) high level of centralized control with active legislation and organization, the sheer size/manpower, and technology (better weapons etc.). It also had a driving *need* for pretty constant warfare to keep wealth coming in, to keep aristocrats busy (and thus not fighting with each other), and to affirm the place of the king as warrior and gift-giver.

The definitive texts on Carolingian warfare are by Bernard Bachrach and they go into lots of detail, though he leans towards a layer of sophistication/organization that not everyone agrees with. There is some debate, for instance, about how well enforced the various laws we see are or whether they were largely aspirational in nature.

You can also gain easy access to a lot of great primary sources in translation if you want to encounter the Carolingians for yourself.

*The Royal Frankish Annals,* *The Annals of Saint-Bertin,* and *The Annals of Fulda* are all available in translation. There is also a great source book from Toronto Press called *Carolingian Civilization* that has lots of neat snippets of lots of types of texts.

edit: Made some edits for more details, clarity etc! Also added some direct quotes since I found *my* copy of *Carolingian Civilization*!

Previous Post: « The silhouette of dreadnought HMS Superb as she makes her way down the River Tyne, spring 1909
Next Post: Albert Einstein at the opening of the 1939 World’s Fair in New York »