Currently doing a project on ancient Japanese history and was searching for artistic images. That’s when I happened upon this beauty. It’s not the only one either, quite a few depictions of men battling with their furious flatulence. Was this some sort of metaphor or “statement” by an artist? You typically don’t see that level of humor or vulgarity in older art, so why exactly were these created? 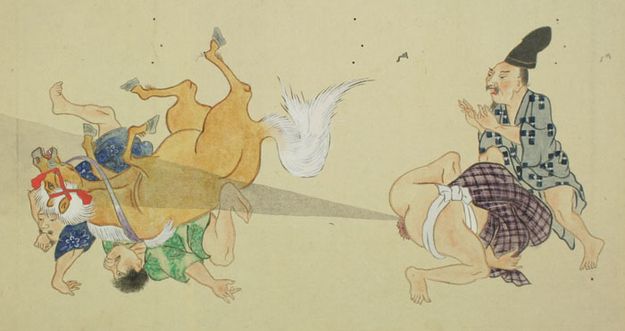 This scroll is called the [He-gassen] (https://en.wikipedia.org/wiki/He-gassen) that is, “Fart battle”. It’s labelled as ancient Japanese art all over the internet, but this particular scroll probably dates back to 1846. That date of origin may be significant – and I’ll get back to this scroll’s particular context – but the scroll is based off earlier similar art. This riotous crude humour was actually the norm in popular Japanese art and literature of the Edo Period (1600-1868), and you can find models for our fart battle way further back than that.

The first fart battle picture known was painted in the medieval period, legendarily in the 12th century, but probably a few centuries later. (We don’t have the original, but there are later copies.) The same scroll also includes a picture of a penis-measuring contest.

This scroll is explored in depth by Akiko Yano in the article “Historiography of the “Phallic Contest” Handscroll in Japanese Art Author(s)” in *Japan Review, No. 26, Shunga: Sex and Humor in Japanese Art and Literature (2013), pp. 59-82* [(full article available with no paywall)]) . Yano describes the farting contest:

>Following the end of the phallic contest, from the next section of the handscroll, a completely different story begins of farting battles {hõhi gasseri). This sequence is much longer than the phallic contest part; the proportion of phallic contest to farting battles is about 3:7. Several dozen priests and male commoners are gaily participating in farting (Figure le), and in one scene, defecating at each other.15 “Who is the winner?” seems of no importance to anyone anymore. In the last scene, a single mighty fart from a priest blows everything sky-high (Figure 1f).
– p.64

Yano makes an interesting remark in her footnote to this passage:

>Footnote 15: This treatment of the subject may be regarded as scatological. Nevertheless, whereas early modern Western scatology in literature and visual art tends to point to a specific object to criticize, in the case of the hōhi gassen, its critical intention is not obvious. See Persels and Ganim 2004.

That is, Western literature and art often uses scatological humour to criticize, lampoon, or satirize targets. So, there’s a temptation to try to interpret something like Japanese fart scrolls as satire/criticism, when all evidence is that people simply found fart jokes funny.

Farts, of course, could be the springboard for satire, however, which brings us back to the 1846 He-gassen and the possibility it’s political satire. Unfortunately, the longest English source on the internet re: this scroll is an anonymous Daily Mail article with absolutely no named sources which proclaims:

>**The art of flatulence! How 200-year-old Japanese ‘He-gassen’ paintings really DO have a deep meaning. **

Is this interpretation true? The Daily Mail’s article seems to have jumbled up a bunch of facts and ideas, then vomited them out in their typical style. For instance, an image of farting guys is captioned:

>**The image, while amusing, hides a more sinister racial message.**

It *is* true that by 1846, there was increasing worry in Japan about the imperialist Western powers. There was also strife in many areas of Japanese society. But, this scroll was painted seven years *before* Commodore Perry “opened up” Japan via gunboat, and it was directly based off older models (in particular, a 17th century fart battle scroll.) There are no Westerners depicted in the scroll. It’s an all-Japanese battle in the style of previous works.

So, where is the Daily Mail getting their assertion that *“While the He-gassen scroll looks ludicrous now, it was a comical depiction of Japan’s serious xenophobia toward the end of this Edo period.”*? What if it’s just another funny picture, like the thousands of funny Edo Period pictures?

But, perhaps there’s a bit of truth to the idea. It’s certainly *not* a depiction of xenophobia, or a direct comment on Western imperialism, but the fart scroll may have a tinge of mockery towards self-important authority figures and their squabbles. This mocking attitude towards an inept government just *may* be connnected to the growing troubles of the political climate.

I haven’t found any scholarship in English on this subject to explain the 1846 scroll more fully, but two decades later, in 1868, there’s a famous fart war picture that’s a bona-fide piece of political satire.

[Fart Battle, from a Toba Picture Scroll (Toba-e makimono no uchi, He gassen) about 1868, Artist Unknown, Japanese- Courtesy of The Museum of Fine Arts, Boston](http://www.mfa.org/collections/object/fart-battle-from-a-toba-picture-scroll-toba-e-makimono-no-uchi-he-gassen-533677)

The painting here depicts the recent battle of Toba-Fushimi, the opening battle of the Boshin War. The individual farters here are blown away by a giant fart let out from a flowered red brocade bag.

The victorious army at Toba-Fushimi had superior modern artillery. But they also had a powerful symbol. Several months before Toba-Fushimi, the Satsuma-Choshu domain coalition secretly prepared brocade red-and-gold banners with the Imperial emblems/ colours then kept them in store to raise during battle, “proving” their status as the Emperor’s army. The banners went up the second day of the battle, sending the opposing shogun’s army into panic at the prospect of being named enemies of the Emperor. Some domains switched immediately to the new “Imperial army”. Toba-Fushimi was a complete rout for the Shogun’s army.

Previous Post: « Control room of the UB-110 German submarine, 1918
Next Post: Police Chief Loses It on reporters that question him and Tells the Blunt Truth about Crime in Milwaukee, WI »