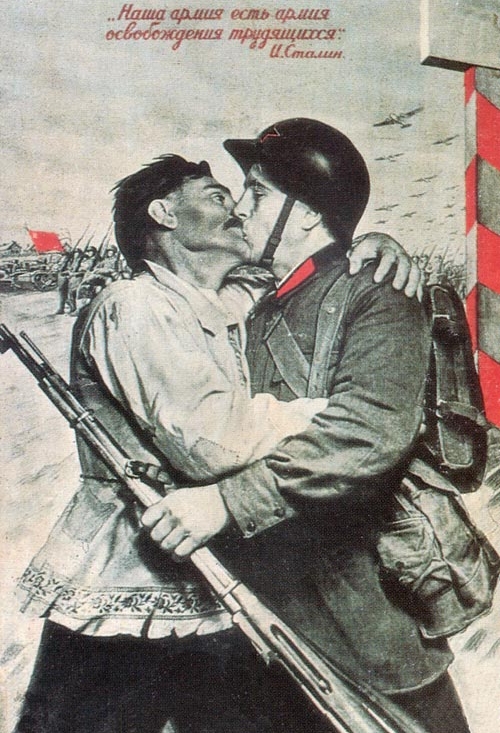 So, it can be a bit of a misconception that the USSR originally explicitly legalized homosexuality in the same manner that nations in more modern times are legalizing things such as gay marriage. Originally, the existing laws against homosexual activity which had existed under the Tsarist regime were repealed when the Bolsheviks abolished the entire Tsarist legal code in 1917 – it was a small part of a massive change in policy, as the new Soviet legal code was brought in to replace the old one. This new code omitted any mention of homosexuality.

So it’s perhaps less that the Soviets deliberately decriminalized same sex relations, and more of a case that the lifting of prohibition might be called “collateral damage”, not necessarily fully intentional, and certainly not necessarily supported by the new government. Indeed, the lifting of prohibition only applied in the Russian and Ukrainian SSRs, and homosexual activity remained a crime in other parts of the USSR. It’s easy to see how issues like LGBT rights could have been forgotten about during such a period of political turmoil – after all, if you’re a communist revolutionary primarily concerned with fighting an incredibly bloody civil war against the previous regime, and establishing a radical new economic order in the wake of that struggle, the question of gay rights isn’t going to be at the top of your agenda.

However, this isn’t a black and white subject. It’s certainly not true to suggest that there was *no support* for LGBT rights in the burgeoning Soviet Union, and while the legalization appears somewhat inadvertent and not-fully-intentional, there was also significant debate within the party on the matter of homosexuality.

The fact that anti-LGBT laws were omitted from the new law code shows this; in a time when most of the world wouldn’t even consider legalizing what they saw as a mental illness, it cannot be purely an accident that the radical Soviet government chose not to mention the topic in their new law code. Soviet LGBT policy was mixed; often, it was seen as a mental illness, typical for the time. But there’s also a fair amount of support from Soviet lawmakers for gay rights. Some viewed this as part of their revolution; the liberation of working peoples was, of course, to include sexual liberation. Considering the history of Russia, this shouldn’t come as too much of a surprise; criminalization of homosexuality by the Tsarist regime was largely orchestrated as part of “westernization”, trying to modernize the Russian state by adopting western methods and values. Before this, the oppression of LGBT minorities in Russia had not been particularly prevalent, and certainly was not state-sanctioned.

Interestingly, others in the Communist Party viewed homosexuality as a consequence of capitalism, and “bourgeois moral degeneracy”. It’s important to realize that communist politics are just as varied as those found in modern capitalist liberal democracies, and “communism” is not a single ideological bloc in any sense (this view of communism is often portrayed, especially in propaganda against it).

More evidence of genuine attempts at sexual liberation in the USSR are found in the fact that openly homosexual people held major public offices during the 1920s in the USSR. Georgy Chicherin was People’s Commisar for Foreign Relations of the USSR from 1923 to 1930, as an openly gay man.

Nevertheless, this period of radical policy (by which I mean, policy which was perceived at the time as radical by most of the world) eventually had to come to an end. While the government was often at odds with itself over this matter, the public was largely indifferent or opposed to LGBT rights, and this began to show with social backlash against these rights. Towards the end of the 1920s, homosexuality was once more officially labelled a mental disorder. It was downhill from there.

In 1933, in Stalin’s USSR, the government once more criminalized homosexual activity – although this time explicitly only mentioning *male* homosexuality as a crime. This was an offence which resulted in internment within prison camps. There are a few historical views on this; for one, Stalin was looking to build public support for himself (believe it or not, dictators often enjoy strong support from their people and have a big interest in maintaining that), and criminalizing homosexuality was not unpopular amongst the public. Furthermore, this was also yet another crime which he could use to accuse high ranking figures within the government who he didn’t like, and hence send them away to a prison camp. Finally, rather interestingly, homosexuality was also portrayed by Soviet propaganda of the time as being favored by fascists; this was, of course, nothing but a lie, as the Nazis were at the time themselves putting homosexuals in prison camps. However, it was a useful tool for the Soviet propagandists.