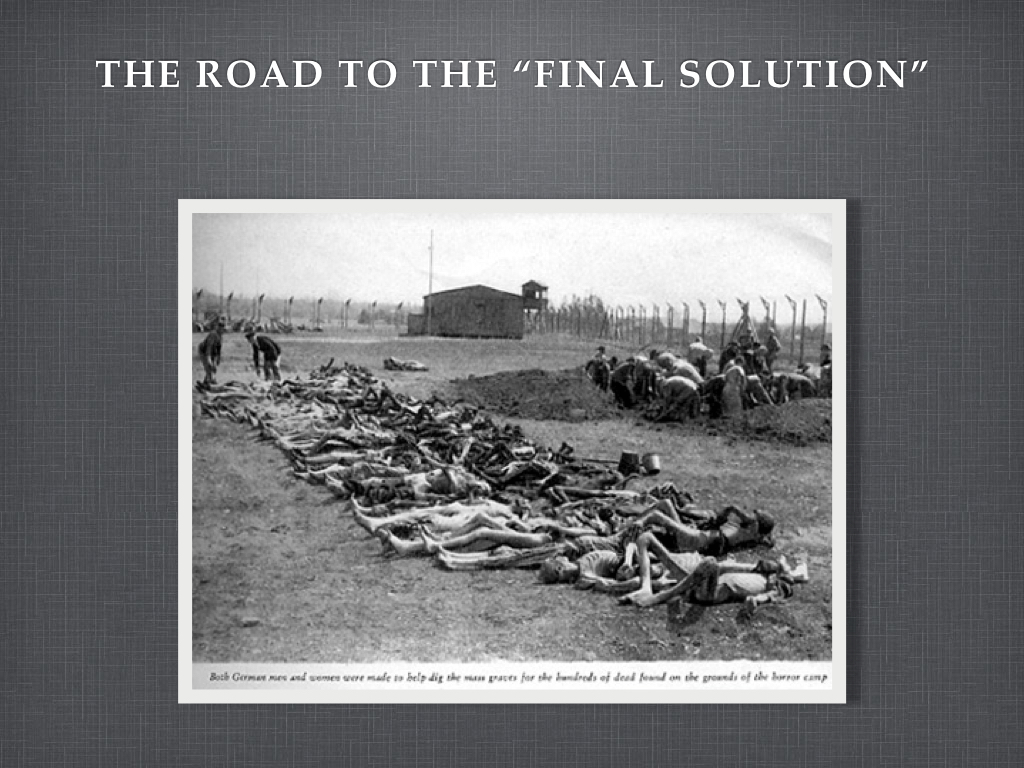 I read and watched the psychological thriller Fatherland and the plot of the book centers around the Nazis trying to conceal the Final Solution on the eve of President Joe Kennedy’s state visit to the the Reich in 1964. In this alternative universe the Nazis won, yet they were still insistent on keeping the Final Solution a secret. So my question is what was the end state for the Nazis?

commiespaceinvader: The Nazis always intended to keep the final solution the semi-secret it was. I’m specifically saying semi-secret because the German population was aware through rumors and bits-and-pieces information that had reached them. This can be seen for example by this exchange between the Viennese Artillerie-Gefreitem Franz Ctorecka and the Panzer-Gefreiten Willi Eckenbach in August 1944 in the Allied POW camp Fort Hunt (translation my own):

> C: And then Lublin. There is a crematoria, a death camp. Sepp Dietrich is involved there. He was somehow caught up in this in Lublin.
>
> E: Near Berlin, they burned the corpses in one of these thingies [“einem Dings”], the people were forced into this hall. This hall was wired with high-voltage power-lines and in the moment they switched on these lines, the people in the hall turned to ashes. But while still alive! The guy who was in charge of the burning told ’em: “Don’t be afraid, I will fire you up!” He always made such quips. And then they found out that the guy who was in charge of burning the people also stole their gold teeth. Also other stuff like rings, jewellery etc.

What this passage shows is that these Wehrmacht soldiers, who after all were both on the lower side of the ladder, being only Gefreite (lance corporals) were uncannily well informed even if the story about using electricity for executions wasn’t true. But knowing not only of the Majdanek death camp near Lublin but also knowing about Sepp Dietirch’s involvement proves them to be very well informed.

So, despite this knowledge circulating, the Nazi leadership still maintained a policy of secrecy, using code wrods and destroying evidence during the war, including the destruction of the Aktion Reinhard camp after the killing of Polish Jews was mostly completely. As Himmler put in his Posen Speech of 1943 in front of SS-officers:

> I am now referring to the evacuation of the Jews, the extermination of the Jewish people. It’s one of those things that is easily said: ‘The Jewish people are being exterminated’, says every party member, ‘this is very obvious, it’s in our program, elimination of the Jews, extermination, we’re doing it, hah, a small matter.’ And then they turn up, the upstanding 80 million Germans, and each one has his decent Jew. They say the others are all swines, but this particular one is a splendid Jew. But none has observed it, endured it. Most of you here know what it means when 100 corpses lie next to each other, when there are 500 or when there are 1,000. To have endured this and at the same time to have remained a decent person — with exceptions due to human weaknesses — has made us tough, *and is a glorious chapter that has not and will not be spoken of.* [Emphasis mine]

The reason for this official semi-secrecy and why Himmler wanted the “glorious chapter” not be spoken of was that this kind of policy suited themselves best in terms of relations with the general German public, especially with the public being able to ignore everything that was happening despite seeing the deportations and the violence of anti-Jewish actions and hearing about mass murder.

The reason this worked best and the reason why this kind of policy was chosen was previous experience. Specifically previous bad experience with the German public after details of a killing program began to emerge. In 1939 with the beginning of the war the so-called T4 Aktion began.

The T4 Aktion or T4 program is often called the Nazi euthanasia program but it had nothing to do with what we understand as euthanasia in the sense of assisted suicide/death. Rather, the T4 program was a killing program aimed at mentally ill and physically disabled people institutionalized in German hospitals and asylums.

With [this order](https://upload.wikimedia.org/wikipedia/commons/f/fd/Aktion_brand.jpg) backdated to September 1, 1939 to match the outbreak of the war, Hitler via Leonardo Conti, Reich Health Leader, Dr. Karl Brandt, Hitler’s personal physician, and Philipp Bouhler of the Führer’s Chancellery set up a system that authorized certain physicians to select patients “deemed incurably sick, after most critical medical examination” for a “mercy death”.

Patients from all over the Reich would then be transported to one of six facilities that also served as mental institutions and hospitals but had been refitted with killing facilities, specifically gas chambers. These were in Grafeneck, Brandenburg, Bernburg, Hartheim, Sonnenstein, and Hadamar. While many of the people who would later go on to run the Aktion Reinhard Death Camps in Poland gathered their first expertise there and while the T4 Aktion was also extended beyond the Reich’s borders into Poland, over time the German population became more and more aware of what was happening.

People talked about smoke stacks from crematoria burning human bodies, the smell waving through the nearby towns; about relatives of those killed receiving two letters of notification for their beloved’s death; about too many or no urns at all arriving with the supposed ashes of their relatives and an assortment of other details that didn’t make sense and propelled the T4 killing program to popular consciousness.

And then the letters started pouring in. Thousands of people wrote letters of protests to various institutions of the Nazi state, including the Reich Chancellery and the Nazi party. Public protests began in February 1941 when the population of the town of Absberg in Franconia protested against a removal action of patients there while it was in place. Soon other such protests followed.

But the real nightmare for the Nazi leadership in terms of relation with the public began when the Churches, specifically the Catholic Church became involved. The Nazi leadership had despite initial waves of persecution tried very hard to avoid open conflict with the Churches, specifically the Catholic one, in the 1930s for fear that the German public was not ready yet for a Germany without the Church and so a sort of detente existed. But when the killings of the T4 program became widely known, several high ranking members of the Catholic Church in Germany began to speak up against it.

In July and August 1941 Bischof of Münster August von Galen delievered three sermons speaking out against the T4 program. While not reported on, they were widely circulated in Germany as leaflets. Richard Evans called them the basis for ” the strongest, most explicit and most widespread protest movement against any policy since the beginning of the Third Reich.” This went as far as Hitler being booed at a rally in Bavaria.

With the war in the Soviet Union and simultaneously the anti-Jewish policies intesifying, the Nazi leadership was forced to publicly stop the program. While de-centralized killings especially of children would continue throughout the war, the centralized program was stopped in August 1941.

This experience was why the Nazi designed the Holocaust the way they did: With the killings taking place in the East, far away from the eyes of the German pubic, with evidence being destroyed and with the murder of the Jews never publicly commented on in any concrete way. Because they feared how the public would react once it all came out. As long as it remained piecemeal information and rumors it was easy to ignore but when protests did happen on occassion – such as in case of the Rosenstraße protests where German women protested the arrest of their Jewish husbands – the Nazi leadership was quick to calm the waves. They were afraid what had happened with T4 would happen again and undermine their war effort and sour their relation with the public – a relation they were keen to maintain for what happened in 1917/18 with revolution etc. was still very much on their mind.

So, what you see in *Fatherland* is not mere speculation. It pretty much matches what we know about how the Nazis handled the murder of the Jews vis a vis the public.

integral_grail: Realistically speaking the Nazis, no matter how cruel they were, would not go about parading their kill counts like a badge of honour. Even warped as their worldview was, they were still seen (and saw themselves) as part of enlightened Western civilization. The Final Solution was seen as “necessary” to rid the world of the Jewish threat, and not something to be spoken of in polite conversation.

You also have to remember that Nazi Germany, despite being a totalitarian single party state, could still very much be influenced by public opinion. Widespread outcry against the Aktion T4 Programme (euthanasia of the elderly and disabled) led to its termination in 1941.

The Nazis end game had always been for a Jew free Europe. Initial plans detailed for mass expulsions and deportations of Jews to places like Madagascar or the gulags of Siberia and Kazakhstan after the war with the Soviet Union was won. When none of these plans cake to fruition they turned to even more drastic measures.

The Final Solution (decided at the Wannsee conference) was the result of cumulative steps of radicalization and drastic changes in institutional policy to deal with the enormous Jewish population now within the Reich. Jews were seen as a security threat, as potential partisans or spies working for the supposed international Jewish conspiracy. With the war going not as planned, something had to be done with this issue.

From the mass shootings conducted by the Einsatzgruppen in the occupied Soviet Union to the increasingly harsh conditions in the ghettoes of the Generalgovernment (occupied Poland), the Final solution was the result of cumulative steps of radicalization and drastic changes in institutional policy to deal with the large Jewish population now under their control.

This had to be kept quiet so as not to antagonize other influential parties, and to minimise detection and possible future prosecution of the individuals and institutions involved in the implementation of the Final Solution should the war ever be lost.

Hence, everything was kept secret. Now it wasn’t that hard to figure out what was being done to the Jews (most would have seen the mass deportations and witnessed violent confrontations themselves) but when the true scale of the killings was kept out of sight and out of mind of the vast majority of people, it was easy to feel ignorant and helpless of what was truly transpiring.

In short, the Nazis saw the need to keep the Final Solution a secret so as to maintain public morale and support for Germany’s war effort, as well as escape culpability for their actions.

For further reading I recommend:

« Portrait of Willie R. Fisher, a 150 pound 6-year-old boy who was exhibited at the Cheshire County Fair in New Hampshire in 1874 because of his extreme weight
Edward Snowden = CIA = Russia = Trump/GOP Stooge »