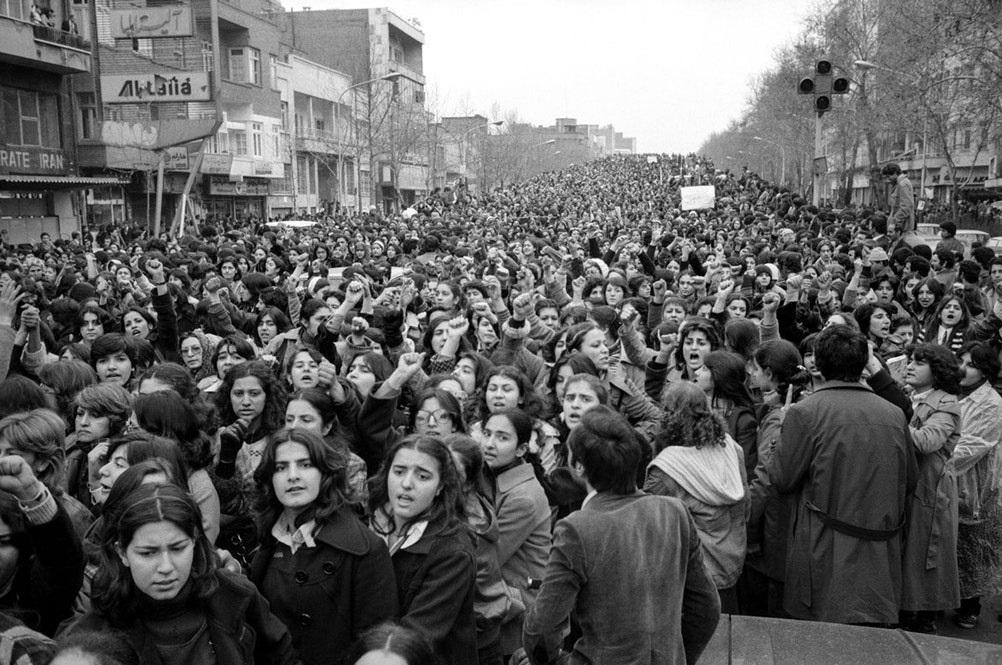 On 8 March 1979, more than 100,000 women gathered on the streets of the Iranian capital to protest against the new Islamic government’s compulsory hijab ruling, which meant that women would henceforth be required to wear a headscarf when away from home. The protest was held on International Women’s Day, and the images show women from all walks of life — nurses, students, mothers — marching, smiling, arms raised in protest.

In the Islamic Republic of Iran, Ayatollah Khomeini severely curtailed rights that women had become accustomed to under the shah. Within months of the founding of the Islamic Republic of Iran, the 1967 Family Protection Law was repealed; female government workers were forced to observe Islamic dress code; women were barred from becoming judges; beaches and sports were sex-segregated; the legal age of marriage for girls was reduced to 9 (later raised to 13); and married women were barred from attending regular schools.

Almost immediately women protested these policies. The Islamic revolution is ideologically committed to inequality for women in inheritance and other areas of the civil code; and especially committed to segregation of the sexes. Many places, from “schoolrooms to ski slopes to public buses”, are strictly segregated.

At the time, Golestan recalls, Iranian people were very “politically charged” and believed change could be effected by demonstrating in the streets.

The hijab today in Iran includes the choice of either a chador or a roopoosh and veil. The chador is a highly modest, usually black or dark outfit that covers the top of a woman’s head and loosely covers her body to her feet. The roopoosh or manteau is a long top similar to a trench coat. “The dress needs to be appropriate according to the Islamic custom of hijab (veil): women are not required to be veiled in front of relatives such as husband, father, son, brother, but are required to be “modest” if they are likely to be seen by na-mahram males”.

“Bad hijab” ― exposure of any part of the body other than hands and face – is subject to punishment of up to 70 lashes or 60 days imprisonment. In April 2007, the Tehran police, (which is under Supreme Leader Ali Khamenei’s supervision), began the most fierce crackdown on what is known as “bad hijab” in more than a decade. In the capital Tehran thousands of Iranian women were cautioned over their poor Islamic dress and several hundred arrested.

Previous Post: « Robert Hanssen being arrested
Next Post: The 3245 year old seal on Tutankhamen’s tomb before it was broken, 1922 »