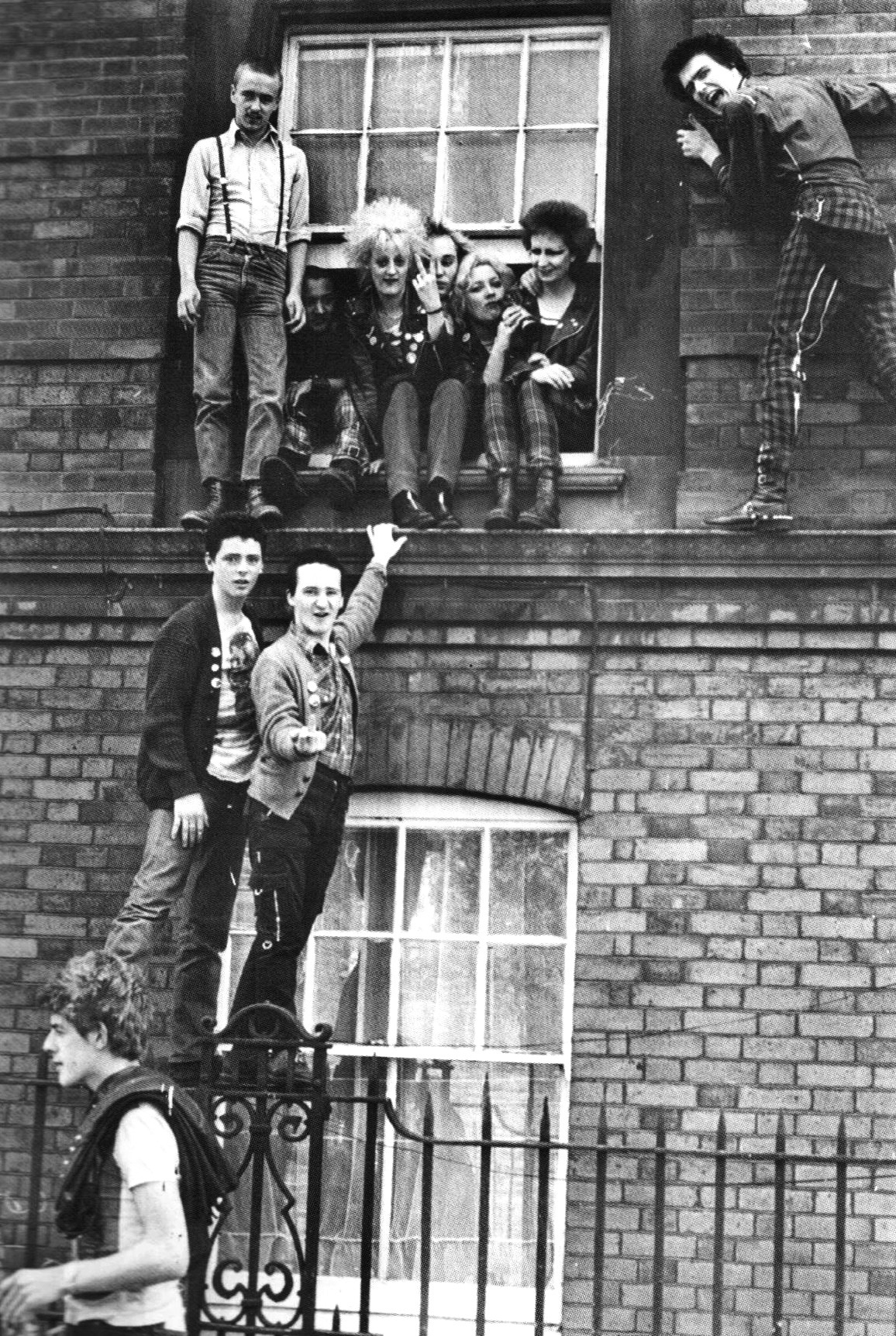 I didn’t think skin heads and punks got along. Where are they now?

Punk subculture includes a diverse array of ideologies, fashion, and other forms of expression, visual art, dance, literature and film. It is largely characterised by anti-establishment views and the promotion of individual freedom, and is centred on a loud, aggressive genre of rock music called punk rock. It’s adherents are referred to as “punks”.

An important aspect of punk was creating explicitly outward identities of sexuality. Everything that was normally supposed to be hidden was brought to the front.

Punk aesthetics determine the type of art punks enjoy, which typically has underground, minimalist, iconoclastic and satirical sensibilities. Punk has generated a considerable amount of poetry and prose, and has its own underground press in the form of zines. Many punk-themed films and videos have been made… Wikipedia

British punk rock band The Business performs in Berlin, Germany in 2003.
A skinhead is a member of a subculture originating among working class youths in London, England in the 1960s that soon spread to other parts of the United Kingdom, with a second working class skinhead movement spreading worldwide in the 1980s. Motivated by social alienation and working class solidarity, skins are defined by their close-cropped or shaven heads and working class clothing such as Dr. Martens boots, braces, high-ankle straight-leg jeans, and simple shirts. The movement reached a peak during the 1960s, and a revival in the 1980s but since then, it has endured in multiple contexts worldwide.

The rise to prominence of skinheads came in two waves, with the first wave taking place in the late 1960s and the second wave originating in the mid 1970s to early 1980s. The first skins were working class youths motivated by an expression of alternative values and working class pride, rejecting both 1950s-early 1960s austerity and conservatism and the more middle class or bourgeois 1960s peace and love ethos and hippie movement. Skinheads were instead drawn towards more working class outsider subcultures, incorporating elements of mod fashion and black music and black fashion, especially from Jamaican rude boys.[1] In the earlier stages of the movement, a considerable overlap existed between early skinhead subculture, mod subculture, and the rude boy subculture found among Jamaican British and Jamaican immigrant youth, as these groups interacted and fraternized with each other within the same working class and poor neighborhoods in Britain.[2] As skinheads adopted elements of mod subculture and Jamaican British and Jamaican immigrant rude boy subculture, both first and second generation skins were influenced by the heavy, repetitive rhythms of dub and ska, as well as rocksteady, reggae, bluebeat, and African-American soul music.[2][3][4]

Members of the second generation in the 1980s were often ex-punks. However, many of these second generation ex-punk skinheads, though fans of ska and reggae like the previous generation of skinheads, continued to listen to and create punk music and were heavily involved in the punk movement, and skinhead subculture has remained closely connected with and has overlapped with punk subculture ever since. 1980s skins were closely aligned with first wave punk, working class Oi! and street punk, ska, reggae, 2 Tone ska, ska punk, dub music, anarchists and anarcho-punks, and hardcore punk. Contemporary skinhead fashions range from clean-cut 1960s mod-influenced styles to less-strict punk- and hardcore-influenced styles.[5]

During the early 1980s, political affiliations grew in significance and split the subculture, distancing the far right and far left strands, although many skins describe themselves as apolitical. As a movement that was highly regionalised and excluded by society’s moral norms, skinhead culture sometimes attracted some violent and hard-line political elements and was eventually tainted in the mid-1980s by tabloid hysteria of fringe and violent racial elements representing extreme racism.[6] According to Shane Meadows, “It’s unfortunate that the racist elements have become such a by-word for skinhead culture. The media has played its part in this, but by the same token it’s clear the fascist element has always been fairly vocal in skinhead culture. The sad bit is that the more enlightened, anti-fascist aspects have not better promoted themselves.”[7] From the 1990s, the style has been adopted by disaffected, Neo-Nazi youths in the former East Germany, Spain, Finland, central European countries, and Eastern European countries such as Russia. However, many skinheads remain influenced by dissident left-wing and center-left type politics or left-wing pro-working class politics that have been part of the movement since the beginning, particularly in the U.K. and the U.S., while others continue to embrace the subculture as an apolitical working class movement… Wikipedia

Previous Post: « WW1 Zeppelin LZ 49 attacks Paris, crashes on the return journey and is captured, 1916.
Next Post: The oldest known photo of The Great Sphinx taken in 1880 »