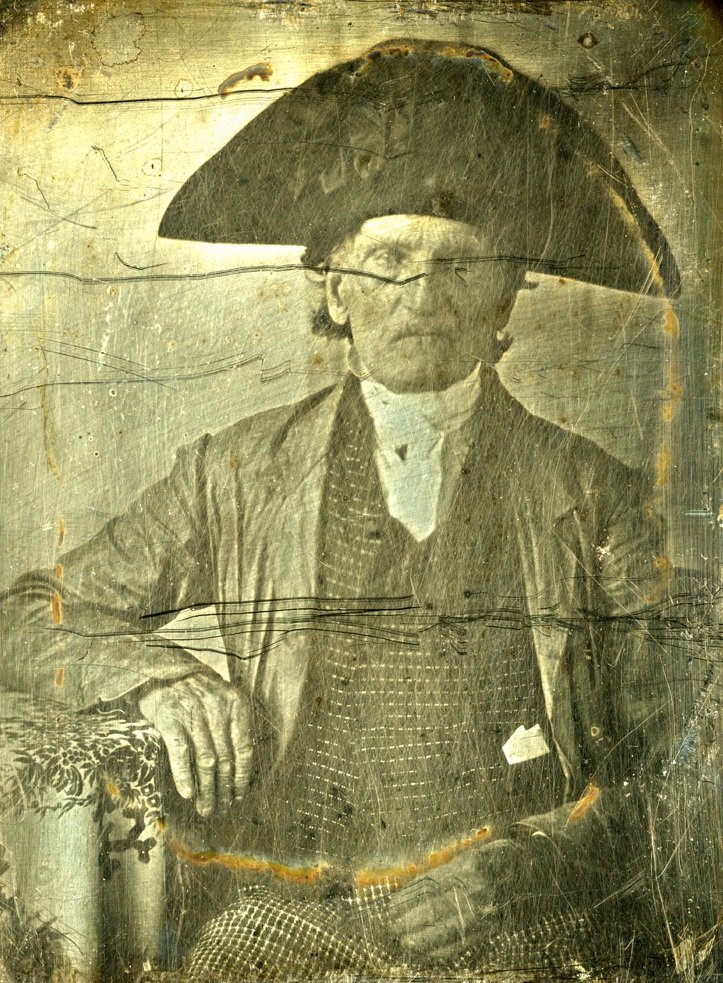 First I’ve ever seen or heard of a photograph of a Revolutionary War veteran. Fascinating

I was thinking maybe they found the tintype in the 1850’s or else he would have been the oldest man in the country at that time as well.

The Revolutionary Eyes of George Fishley

Captain George Fishley stares into the camera, his tiny eyes almost lost in gray, a faded three-cornered hat balanced on his ancient head. We stare back. It takes a moment for the truth to sink in. This is not another Civil War veteran. We have seen hundreds of photographs of those men, Confederate and Yankee, posed stiffly or lying dead in fields of battle. This is something else. This is a photograph of a man who fought the British in the Revolutionary War, something very few Americans have seen.

“I was upstairs in the Langdon Room of the Portsmouth Historical Society,” society vice president Peter Narbonne told me minutes after making his discovery. Peter was looking for artifacts to feature in an upcoming exhibit. (The museum is also known as the John Paul Jones House.)

“I noticed this daguerreotype tucked against the back wall in a glass cabinet,” Peter says. “I immediately realized that I was holding one of the rarest images ever photographed — and a wonderful piece of Portsmouth history.”

There is a note attached to the back of the image. It reads:

“Capt. George Fishley is 90 years on his birthday June 11, 1850. He called at the house this afternoon and appeared well and healthy for an old man, he went to sleep and died December 26th aged 90 years, 7 months adn15 days.”

There’s much research to do, but in the week since the daguerreotype resurfaced, a picture of Portsmouth’s last “cocked hat” is evolving. We have rediscovered a celebrity. An 1850 obituary in the Portsmouth Journal says Capt. Fishley died at 91 and had become a familiar figure at public events. He entered the Continental Army in 1777, the paper says, under Gen. Poor and Col. Dearborn. He served three years and, according to his own account, was among the men who marched near Valley Forge wearing no shoes or stockings. Fishley was at Monmouth, the New Jersey confrontation led by George Washington. Monmouth is best known for the resulting court martial of Maj. Gen. Charles Lee and for the famous camp follower “Molly Pitcher” who took her husband’s place at a cannon when he was wounded in battle.

After the Revolution, Fishley served aboard a privateer, was captured and imprisoned in Halifax, according to the Portsmouth Journal. He later commanded a coaster shipping between Portsmouth and Boston. He was a popular figure in patriotic events for decades, and was one of the few surviving veterans to attend the opening of the Bunker Hill Monument in Boston in 1843. In another ceremony, dressed in his uniform, he commanded a miniature ship that was transported from Portsmouth inland to Concord, NH among a crowd of 300 celebrants. Invited to meet James Polk, Capt. Fishley at first declined to shake the President’s hand saying he had no political sympathies with the man. Born under the reign of King George, he lived under the first 13 American presidents, just missing New Hampshire born Franklin Pierce, who became President Number 14.

Capt. Fishley was among the three longest-surviving Revolutionary War veterans in Portsmouth and a patriot to the end, as this story from his obituary confirms:

“It is told of Fishley that when Adams and Jefferson were buried in 1826, and a procession was contemplated in Portsmouth, of which the Revolutionary heroes were to form a part, the committee came to Fishley requesting him to appear. He asked who were to be there. All were named until —– was mentioned. “What” cried the old man. “He a patriot!” Why he was a d— Hessian, and came over hear to fight us for six pence a day. No s-i-r, I don’t ride with such patriots as he!” And ride he did not on the solemn occasion.”

The “discovery” of treasures like Mr. Fishley’s photo is what makes historical society volunteer work fun. Every town in the region has its historical society. Many old “colonial revival” museums like the one in Portsmouth are packed with hundreds, even thousands of miscellaneous artifacts waiting to be appreciated. Most are on public display in bulging glass cases. It’s too much stuff for visitors to assimilate in a 30-minute tour.

Following the theory that “less is more” a group of PHS volunteers are working with the house manager to create a new exhibit. The idea is simple – find and feature about a dozen of the best items in the collection. I’m on the committee, and it’s harder than it sounds. There are at least 2,500 items in the museum. I’m partial to a shoe once worn by a Portsmouth woman who rode in a carriage with George Washington. There’s a ceremonial paddle hand carved by 19th century Fiji natives.

And now there’s the amazing photo of George. New Hampshire was still an English colony when George Fishley was born. Records prove he was among hundreds of elderly New England pensioners who applied to an early veteran’s relief program sponsored by the federal government in 1840. We know he was photographed in 1850 at the age of 90. He died the same year and histombstone is still legible in South Cemetery. George Fishley’s eyes stare out from the dawn of America. Unlike his hands, which are large and strong, his eyes appear weak and distant. Perhaps he was blind, or he may just look that way. Early daguerreotype models had to look at the lens and freeze for as much as 30 seconds adding to their ghostly gaze and brittle posture.

We stare back, the truth still seeping in. These sunken eyes may have seen George Washington when he visited Portsmouth in 1789 or watched as the town crier read the Declaration of Independence on the steps of the Old Statehouse, or watched downtown Portsmouth burn, or seen the blockade of the harbor by British ships in the war of 1812. Those are events that live beyond photography in a time of engravings, and paintings and the printed word. We know that world only from the interpretation of artists, not from the gritty mechanical truth of the camera.

I’ve never seen a photograph of a Revolutionary War soldier. Peter hadn’t either. Nor had early photograph collector Thom Hindle of Dover when I called. Nor had Funy Burdick of the American Independence Museum in Exeter. Nor had most of the daguerreotype experts I contacted by email around the country.

“There are other pictures like this, but they’re rare,” Dennis Waters of Exeter told me.

Dennis makes his living exclusively by selling early daguerreotypes and has one of the largest private collections (see related story in Section C). He recalls seeing only one similar image and estimates there may be no more than 20 documented images known — that among tens of thousands who fought in the Revolution.

The Maine Historical has one, a portrait of Conrad Heyer of Waldorboro, in its extensive daguerreotype collection. Mark Johns, President of The Daguerreian Society told me there may be many Revolutionary War veteran images, 100 or many more, he suggests.

He’s not aware of any daguerreotype compilation of “old soldiers” from the Revolution. Worse, most images that might qualify, have no documentation.

There is one small compilation, Dennis Waters says. Early photographer E.B. Hillard traveled the nation photographing all the remaining 18th century veterans he could find and published the results in 1864. There are at least a dozen “carte vise” photos in his book “The Last Men of the Revolution”. George Fishley had been 14 years in the earth at South Cemetery by that time. Even the photographic process had changed from the rich lustrous metallic daguerreotype to the flatter sepia-toned paper printing common in the Civil War.

The first photographic portrait in the Library of Congress archives was shot in 1839. By the 1840s and early 50s, amateur daguerrrians were hoping to strike it rich in this new field. But cheaper, less complex and costly methods were already in progress. Many small shops went broke or the owners died from handling the deadly chemicals

Every picture tells a story. The “best of” display at the Portsmouth Historical Society is still in the planning stage. Building a proper modern exhibit area requires good lighting, that in turn requires better electrical wiring in a room last renovated when the museum opened in 1920. Old exhibits will have to be moved and old artifacts carefully stored. New display cases need to be made, the floors and walls painted. Each item has to be researched and prepared and labeled. We’ll need an exhibit brochure. We’ll need money and a great many hours of volunteer time.

If this is beginning to sound like a call to arms, it is. Once a discovery is made, the real hard work begins. An army of hard-working history-lovers is needed to get this rare American portrait on public display. Look into the eyes of Portsmouth’s last Revolutionary War soldier, a man who fought to create this country. Capt. George Fishley needs you!

Previous Post: « “When a person tells you that you hurt them, you don’t get to decide that you didn’t.” Louis C.K.
Next Post: Two women buying cocaine capsules from their dealer, the lookout is standing in the background, Berlin 1929 [598×411] »