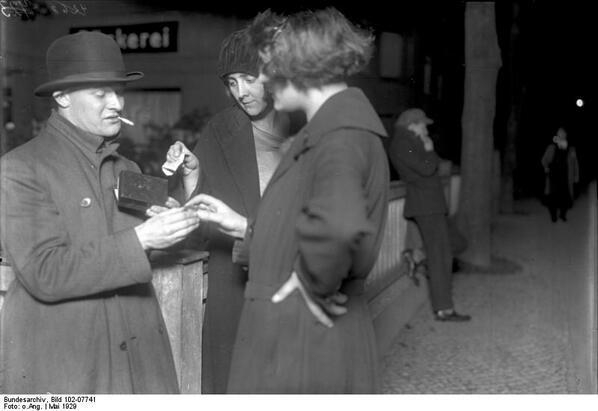 aliasmarx: The lookouts not doing a great job somones photographed the whole deal!

Smelly_Elvis: Yeah, I always bring a photographer when I buy my C’caine.

MOTAMOUTH: You think they would already cut cocaine at this time? And I thought It was still legal?

shillyshally: That man could not look more movie villain. Maybe it’s because he looks sort of like Peter Lorre.

Sploitspiller: Is that Creed Bratton?

jtinz: I would have expected cocaine to be legal back then.

repeatwad: There is a mystery series set in this time period, a book called *Babylon Berlin* by Volker Kutscher follows crime against the backdrop of conflict between communists and nazis.

sfacets: I feel like if there were any perfectly valid period to be taking drugs it was in the first half of the 1900’s.

paisley53: Is the lookout the person wearing a hat and leaning against the wall, or the person on the far right just standing there in a coat?

fridaymonkeyk: Nothing like a well lit photo & photographer to keep a illegal drug deal on the down low.

CrunchyNappyFap: Even in this styled clothing the man looks like a dealer

StonedZombie25: I wonder who took this picture without them noticing

Greatpointbut: Where was this particular cocaine grown is what I wonder.

gzip_this: Looks a bit like Mackie Messer (Mack the Knife).

AutoRockAsphixiation: Two things people have always done and will always do; fuck and get fucked up. We should focus on making those things safer rather than criminalizing or stigmatizing them.

Michalo88: What is a cocaine capsule?

wowzaa1: How do you know its cocaine?

GooBear187: Cocaine capsules? What haha. Bruh don’t be a bobbie and just sniff it

jeefray: Prior to 1900 in the United States most street drugs were sold as medicine and were perfectly legal.

UncensoredIdeas-PORN: Where was this found?

How do you know what’s happening?

tangatalaga: The dealer looks like and fist the character description of Creed on the Office!

ausbos5: Nothing’s changed, studied abroad there for six months and bought a couple grams of marijuana with two cops about 80-100 yards away from me. That city is the best.

rumblith: Anyone else think he kinda looks like Ed Harris/The Man in Black? I think I’d like to see him in a 20’s era film as a cocaine dealer.

digiskunk: This is the kind of content I came for! Such an intriguing photo. I wonder how much the capsules cost?

Previous Post: « American Revolutionary War veteran George Fishley. Famous in New Hampshire as “the last of our cocked hats”. Circa 1850
Next Post: “If you went back and fixed all the mistakes you’ve made, you erase yourself.” Louis C. K. »