“Anything that gets your blood racing is probably worth doing.”
― Hunter S. Thompson 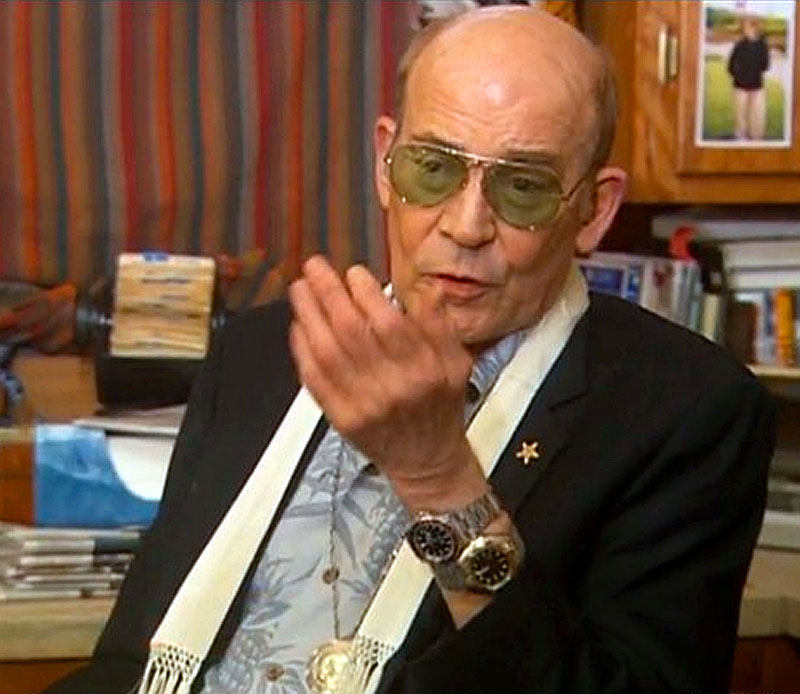 Hunter Stockton Thompson was an American journalist and author, and the founder of the gonzo journalism movement. Wikipedia “Buy the ticket, take the ride.”

“When the going gets weird, the weird turn pro.”

“I hate to advocate drugs, alcohol, violence, or insanity to anyone, but they’ve always worked for me.”

“Life should not be a journey to the grave with the intention of arriving safely in a pretty and well preserved body, but rather to skid in broadside in a cloud of smoke, thoroughly used up, totally worn out, and loudly proclaiming

“We are all alone, born alone, die alone, and—in spite of True Romance magazines—we shall all someday look back on our lives and see that, in spite of our company, we were alone the whole way. I do not say lonely—at least, not all the time—but essentially, and finally, alone. This is what makes your self-respect so important, and I don’t see how you can respect yourself if you must look in the hearts and minds of others for your happiness.”

“A man who procrastinates in his choosing will inevitably have his choice made for him by circumstance.”

“I hate to advocate drugs, alcohol, violence, or insanity to anyone, but they’ve always worked for me.”

“So we shall let the reader answer this question for himself: who is the happier man, he who has braved the storm of life and lived or he who has stayed securely on shore and merely existed?”

“Sex without love is as hollow and ridiculous as love without sex.”

“Life has become immeasurably better since I have been forced to stop taking it seriously.”

“No sympathy for the devil; keep that in mind. Buy the ticket, take the ride…and if it occasionally gets a little heavier than what you had in mind, well…maybe chalk it up to forced consciousness expansion: Tune in, freak out, get beaten.”

“The Edge… There is no honest way to explain it because the only people who really know where it is are the ones who have gone over.”

“Let us toast to animal pleasures, to escapism, to rain on the roof and instant coffee, to unemployment insurance and library cards, to absinthe and good-hearted landlords, to music and warm bodies and contraceptives… and to the “good life”, whatever it is and wherever it happens to be.”

“Music has always been a matter of Energy to me, a question of Fuel. Sentimental people call it Inspiration, but what they really mean is Fuel. I have always needed Fuel. I am a serious consumer. On some nights I still believe that a car with the gas needle on empty can run about fifty more miles if you have the right music very loud on the radio.”

“Some may never live, but the crazy never die.”

“Too weird to live, too rare to die!”

“When the going gets weird, the weird turn professional.”

“In a closed society where everybody’s guilty, the only crime is getting caught. In a world of thieves, the only final sin is stupidity.”

“It never got weird enough for me.”

“I have a theory that the truth is never told during the nine-to-five hours.”

“I was not proud of what I had learned but I never doubted that it was worth knowing.”

“We cannot expect people to have respect for law and order until we teach respect to those we have entrusted to enforce those laws.”

“We had two bags of grass, seventy-five pellets of mescaline, five sheets of high powered blotter acid, a salt shaker half full of cocaine, and a whole galaxy of multi-colored uppers, downers, screamers, laughers… and also a quart of tequila, a quart of rum, a case of Budweiser, a pint of raw ether and two dozen amyls.
Not that we needed all that for the trip, but once you get locked into a serious drug collection, the tendency is to push it as far as you can.”

“Like most others, I was a seeker, a mover, a malcontent, and at times a stupid hell-raiser. I was never idle long enough to do much thinking, but I felt somehow that some of us were making real progress, that we had taken an honest road, and that the best of us would inevitably make it over the top. At the same time, I shared a dark suspicion that the life we were leading was a lost cause, that we were all actors, kidding ourselves along on a senseless odyssey. It was the tension between these two poles – a restless idealism on one hand and a sense of impending doom on the other – that kept me going.”

“All my life, my heart has sought a thing I cannot name.

“We can’t stop here, this is bat country!”

“Freedom is something that dies unless it’s used.”

“Maybe it meant something. Maybe not, in the long run, but no explanation, no mix of words or music or memories can touch that sense of knowing that you were there and alive in that corner of time and the world. Whatever it meant.”

“Maybe there is no Heaven. Or maybe this is all pure gibberish—a product of the demented imagination of a lazy drunken hillbilly with a heart full of hate who has found a way to live out where the real winds blow—to sleep late, have fun, get wild, drink whisky, and drive fast on empty streets with nothing in mind except falling in love and not getting arrested . . . Res ipsa loquitur. Let the good times roll.”

“Yesterday’s weirdness is tomorrow’s reason why.”

« “Painting is like reading a book – I’m absorbed in the story and can’t put it down.” ZMWitter, PeaceAspirations
William Lanne, the last “full-blooded” Aboriginal Tasmanian man, 1866 [600×878] »