“At every moment of our lives, we all have one foot in a fairy tale and the other in the abyss”
– Paulo Coelho

Paulo Coelho de Souza is a Brazilian lyricist and novelist and the recipient of numerous international awards. He is best known for his widely translated novel The Alchemist. Wikipedia 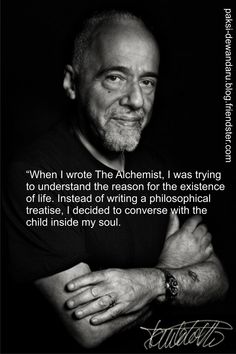 Paulo Coelho’s life may well be itself worthy of a homely book. During his adolescence he was committed three times to a psychiatric hospital by his own parents, who believed that his rebellious attitude was a sign of madness; it was under such parental guidance that he was there subjected to the horrors of electroshock therapy. Once a man, Coelho joined a local version of the hippie movement, most notably meeting rock star Raul Seixas, with whom he collaborated. However, a presence in certain subversive artistic circles first brought him to the attention of the Brazilian dictatorship, which proceeded to imprison and torture him. The collaboration nonetheless survived the ordeal, and he and Seixas ended up writing about 120 songs together between 1973 and 1982. It was in that final year that Paulo Coelho met his spiritual mentor ‘J’ while traveling in Europe, who convinced him to undertake the pilgrimage to Santiago de Compostela. This pilgrimage changed his life forever and turned the misguided hippie man into a spiritually guided writer. Something which he presumably still is today, to the delight of many. The Alchemist is a psychological novel, or so it would like you to think. Paulo Coelho tells the story of a Spanish shepherd who creates his own personal legend through his Andalusian travels in Egypt. The story propounds the “philosophy” that people only discover themselves when they understand how to listen. But don’t listen to us, listen to the alchemist: ‘Alchemy is the projection in the material world of all spiritual concepts. Not only laboratory work but also that inner, personal chemistry, whose lab becomes our life itself. If we are faithful to what I call the ‘Personal Legend’, the whole world changes and the things we touch will also turn into the philosophical gold.’

What is the price of success? Paulo Coelho offers us a mirror of our own society, where the cult of luxury and success makes us deaf to the truths murmured by our hearts… or something. In Cannes we meet those who have succeeded in the worlds of haute coutureand cinema: a Russian millionaire, a reputed Middle-Eastern stylist, starlet Gabriela, an ambitious detective, and the model Jasmine. Money, power, and fame are their lives’ aims, and to achieve these they are prepared to do anything.

The Devil and Miss Prym

The eternal conflict between good and evil is revisited in The Devil and Miss Prym. To tell this parable Coelho has transformed the Garden of Eden into a small village in the mountains, dozing in peaceful bliss, and the Fruit of Knowledge into gold bullion. The tempting serpent is an elegant traveller and talker who chooses Chantal Prym, a gorgeous young barmaid, as his mediator. Decorated with biblical simplicity, this fable is discreetly scented with sulfur. Coelho dissects and manipulates his characters like puppets in this world of shadows, where death is not confined to cemeteries but remains closely linked to life. So, are men good or bad? And is God even interested in their fate? The answer can be found in a little more than 200 pages.

Maria is a young Brazilian who works as a sales clerk in a fabric store and gives herself a week’s holiday in Rio de Janeiro. On Copacabana beach, a Swiss man offers her a job as a cabaret dancer in Geneva. She sees this as the beginning of a fairy tale, but reality turns quite different. Maria falls into prostitution, although it is important to note that she does this without shame. For all her adventures, however, sex and love remain enigmas, until finally she meets a young painter, who happens to be as lost as she is. To discover the sacredness of sexuality, Maria must first of all find a way to reconcile with herself. And figure out what that means, exactly.

Brida, a young Irish woman in search of knowledge, has always been interested in magic, but she longs for something more. Her quest leads her to meet people of great wisdom, who enable her to discover the spiritual world. A mage dwelling in a forest teaches her to overcome her fears and believe in the goodness of the universe; a magician explains how to dance to the rhythm of the world and invoke the moon. Brida then leaves to meet her destiny. Does she succeeds in leaving everything behind to become a witch? This enchanting novel revives themes dear to readers of Paulo Coelho, as the storyteller weaves a narrative that mixes love, passion, mystery and spirituality.

By the River Piedra I Sat Down and Wept

Pilar and her companion first meet during childhood, but remain nothing more than acquaintances until they run into each other again 11 years later. She is a woman who has learned to be strong and not get overwhelmed by her feelings. He is a man who has the gift to heal others and seeks in religion a solution to his internal conflicts. Both are united by the desire to change and to pursue their dreams. To achieve this, they will have to overcome the usual obstacles faced by the preternaturally lost: fear of failure, and prejudice. Pilar and her companion then decide to go to a small village in the Pyrenees to discover their own “personal truth”. Paulo Coelho tells this story with poetic and modern dialogue, but also plunges us into the mysteries of the divine. Because, as he says, ‘the spiritual experience is above all a practical experience of love.’

It is the 14 July 1099. With crusaders at the gates of their city, the inhabitants of Jerusalem crowd around a mysterious man known as the Copt to hear his last teachings. The crowd, composed of Christians, Jews and Muslims, who previously lived in harmony, are preparing for battle, defeat and slaughter. But far from any war strategy is a lesson of life that is given to them. Manuscript is an invitation to rethink our humanity and pose a seminal question: which values remain when everything else is destroyed?

Maktub is a collection of stories and parables that represent a colorful treasure of wisdom into fragments. These short texts, inspired by the most diverse sources and folklore, were born of Paulo Coelho’s contribution to Brazilian daily Folha de Sao Paulo. Due to the success of his column, the author decided to select his favorite texts to publish for his global audience.

A famous writer abandons all the principles governing his life when his wife disappears without a trace. Over a journey that will take him from Paris to Central Asia, he crosses the steppe and the desert to find something that gives a greater meaning to his life. Paulo Coelho revisits ancient myths and distant traditions to evoke themes of love, the pilgrimage of self-knowledge, and the origins of belief. Paulo Coelho uses his own autobiography to describe with straight-faced irony the state of the modern world. He talks about freedom and solitude, wondering about the future of man in search of stability, love and spirituality.

The Witch of Portobello

The adopted daughter of a rich Lebanese family, Athena moved to London when war broke out in their country, a war which she predicted. At university, she falls in love with a man who gets her, as these things tend to do, pregnant. The young couple overcomes difficulties and marry against the wishes of their families, but their marriage does not long resist the vicissitudes of modern life. Now a mother, Athena cannot help thinking of the woman who brought her into the world, and sets out to discover that she is a gypsy and her name is Lilian. Athena wants to understand how her mother could abandon her. What she will discover during the trip will change the course of her life and those of her loved ones. Thus is born the Witch of Portobello: Athena/Lilian, at the risk of her own destruction, will use her extraordinary powers to help others.

Previous Post: « A vigilante hacker discovered some big smartphone companies purposely leaving backdoor access and making their gadgets extremely vulnerable to hacking attacks.
Next Post: “If you’re listening to a rock star in order to get your information on who to vote for, you’re a bigger moron than they are.” Alice Cooper »