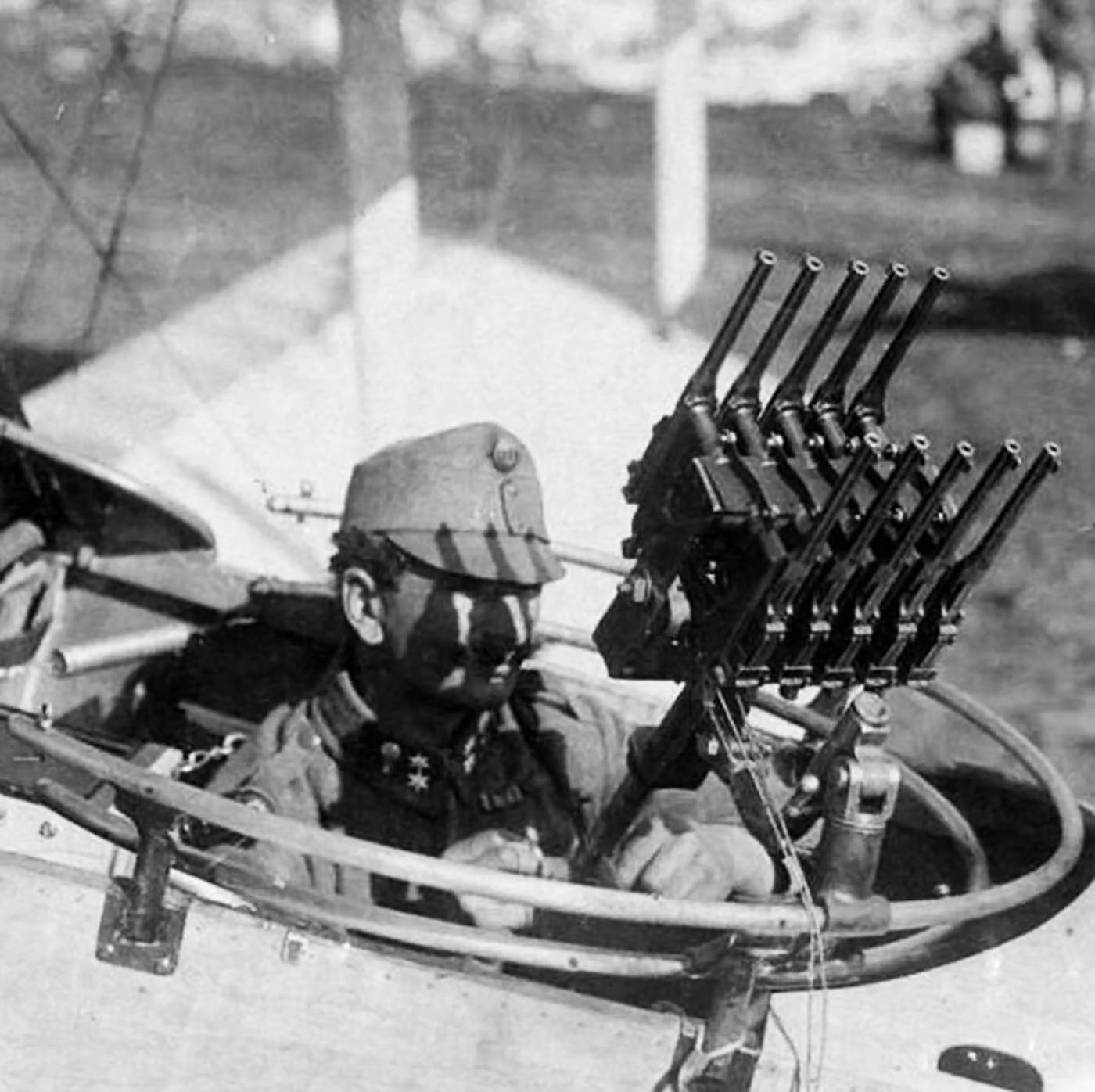 thatscentaurtainment: Okay, I know very little about aviation, but I do know that in early in WWI a lot of pilots would carry handguns and hand grenades to use against other aircraft, so this doesn’t seem THAT crazy. It’s obviously not as good as putting a machine gun in that spot, but it is in keeping with existing practices at the beginning of the war.

kweitzel: This makes me think of the Soviet plane that put a crap ton of ppsh sub machineguns in the bomb bay to shoot towards the ground

Have you tried.. I don’t know like a bunch of pistols all together?

You mean just fire a whole lot of pistols strapped together simultaneously?

housebird350: That doesnt really look like the best idea ever.

damo13579: I wonder how effective that would have actually been. would be a bitch to reload.

SpecialistSix: Armed with 10 Mausers and an absolutely fantastic mustache.

YourVeryOwnCat: This feels like one of those “you see, Ivan” memes

Sensur10: So when will this bad boy pop up in BF1?

Zachrabbit567: If anybody was wandering why Austrians are infamously bad at war…

ilkikuinthadik: The Italians had a 9mm rear gunner weapon, but unlike this, it could shoot 3000 rounds a minute. https://en.m.wikipedia.org/wiki/Villar-Perosa_aircraft_submachine_gun

wdelvi: How the hell are your supposed to reload? That’d take AGES

What do you mean “armed with TEN Maus…” Oh.

FecalMist: I think this image summarizes pretty well why the austro-hungarians were such terrible allies for the Germans

(In Star Wars, Han Solo’s blaster is a Mauser C96 with some extra bits attached)

50calPeephole: There’s something about the advancement in technology of WW1 that is just amazing.

We glide into WW1 basically on a Wright Brothers flyer and horses, zoom out on biplanes and tanks. I really can’t think of any other war with such a change in technology from beginning to end.

SourKraut619: Wish I knew how to share this to the r/battlefield_one page

ThatNoobyDude21: Just pack a punch them and bam you got 10 boomhildas. He could win the war by himself.

_dismal_scientist: Imagine a beowolf cluster of those things

YourCreepyBishop: The C96 and the Luger P08 are the two coolest handguns from history, hands down.

paperwaller: I had no idea the c96 was used in this manner. They had to have been desperate for any reliable setup to go this route since of course there would have been better options at the time. He would have almost been better off with a rifle mounted there and reloading the bottom row in flight must have been a real pain in the ass considering these use a stripper clip fed box mag.

« “In the vastness of space and the immensity of time…” Carl Sagan
Claude Monet, French artist and a leading member of the Impressionist group of painters was born in Paris #OnThisDay 1840 »