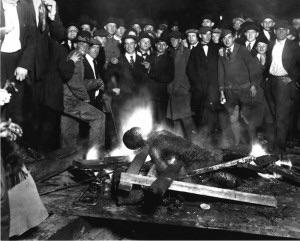 Out of all the photographs from the Jim Crow era that I’ve seen this one affected me the most. If you look closely you’ll see teenagers smiling at Will’s burnt body. It blows my mind how different people were less than a century ago.

The Omaha race riot occurred in Omaha, Nebraska, September 28–29, 1919. The race riot resulted in the brutal lynching of Will Brown, a black worker; the death of two white men; the attempted hanging of Mayor Edward Parsons Smith; and a public rampage by thousands of whites who set fire to the Douglas County Courthouse in downtown Omaha. It followed more than 20 race riots that occurred in major industrial cities of the United States during the Red Summer of 1919.

richg0404: [Here is a link](https://imgur.com/9GSl9kj) to a previous posting of this picture on Imgur, that has a higher resolution. Even more disturbing.

ld43233: Look grandpa that guy has a suit just like yours.

ohhml: Idk why but I just fucking hate how there are kids watching. « Washington Post Calls for Outrage About War on Yemen, Hides U.S. Role in It
Sergeant Plays Santa for British Children during WWII, 1942 »