Holocaust was an “extortion racket.” Devoting an entire page on his campaign website to the “Holocaust racket,” Jones said that the extermination of 6 million Jews — and millions of others in Nazi-occupied areas during the 1930s and 1940s — was “the biggest, blackest lie in history.” 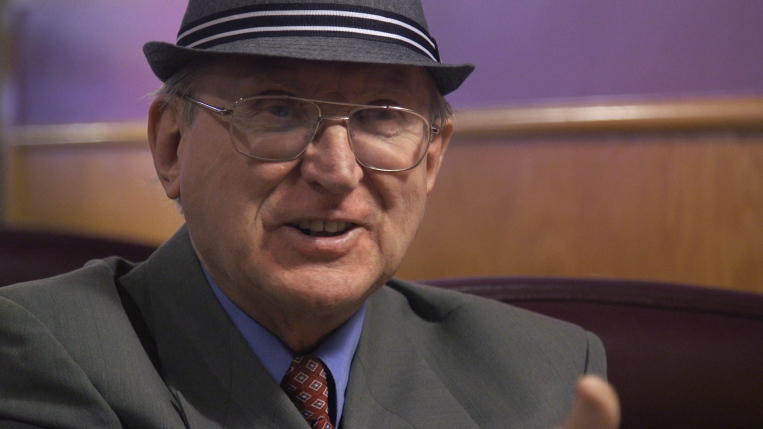 “Other than a few professional concentration camp survivors, such as the late Simon Wiesenthal or the current Semitic Super star Elie Wiesel, there is no proof such a so-cold “Holocaust” ever took place anywhere in Europe, against the Jews . . .

Arthur Jones, 70, calls the Holocaust ‘the biggest lie in history,’ but will run unopposed in the upcoming GOP primary in 3rd Congressional District, a Democratic stronghold

An avowed anti-Semite, Holocaust denier and former leader of the American Nazi Party is set to become the Republican nominee for a congressional seat in Illinois, the Chicago Sun-Times reported on Sunday.

Arthur Jones, 70, is running unopposed in the GOP primary for Illinois’ 3rd Congressional District on March 20, making him a shoo-in to face the Democratic incumbent in the November election. Jones has stood for public office many times since the 1970s, always unsuccessfully.

The Anti-Defamation League responded by calling Jones “by every definition an anti-Semite and unrepentant bigot.”

The congressional seat, which encompasses parts of Chicago, is a Democratic stronghold, which is why the Republican Party didn’t bother to field an official candidate. Jones had run in the district primary seven times before this year but never came close to securing the nomination. 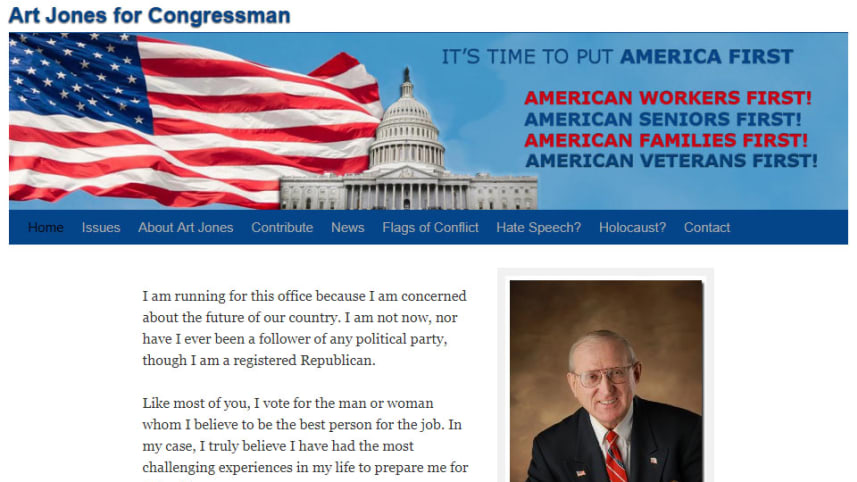 On his campaign website, called Art Jones for Congressman – which features a logo of the GOP elephant with a Confederate flag atop it – Jones has a special section called “Holocaust?” The section features seven scanned articles or documents, the first one called “The Holocaust Racket.”

“This idea that ‘SIX MILLION JEWS,’ were killed by the National Socialist government of Germany, in World War II, is the biggest, blackest, lie in history,” declares the document, which is signed by the “Veterans of Jewish Wars.”

The document further states that “Jewish International Communism and Jewish International Zionism are directly responsible for the murder of at least 300 million people and these blood-thirsty criminal vampires may yet ignite a THIRD WORLD WAR, if we don’t stop them.”

Other documents in the section include “The Kosher Food Scam,” “Holocaust ‘Survivors’ in U.S. Given Preference by S.S. [Social Security]” and a 1993 newspaper cutting saying “34% Doubt Holocaust.”

Jones is a retired insurance broker and says on his campaign website that he was “raised in a highly patriotic family. The blood of the Southern Confederate and the Northern Yankee are both in me.”

He told the Chicago Sun-Times about his former leadership of the American Nazi Party and that he now heads a group called the American First Committee.

“Membership in this organization is open to any white American citizen of European, non-Jewish descent,” he told the daily.

He told the Chicago Tribune he had dressed in full Nazi regalia during a march in Skokie, Illinois, in the 1970s, and billed himself as “the White People’s Candidate” during his failed bid to become mayor of Milwaukee in 1976.

The Anti-Defamation League told the Sun-Times Jones had been on its radar for some time.

“Arthur Jones, who proudly displays Holocaust denial, xenophobia and racism on his blog and website, has a long history of hateful, extremist and anti-Semitic views,” the ADL’s regional director in Chicago, Lonnie Nasatir was quoted as saying.

“For example,” Nasatir continued, in 2009 “he protested the opening of the Illinois Holocaust Museum and Education Center, and continues to espouse absurd conspiracy theories questioning the deaths of millions of Jews.”

Jones almost landed the 3rd Congressional District nomination in 2016, but was removed from the ballot when Illinois Republican Party members highlighted irregularities in his application. He told the Chicago Tribune that this primary represents “absolutely the best opportunity in my entire political career.

“Every time I’ve run, it’s been against a Republican who follows this politically correct nonsense. This time they screwed up,” he told the paper.

The Republican Party is now seemingly powerless to stop Jones running in the general election, but its Illinois chairman, Tim Schneider, distanced the party from Jones. He told the Chicago Sun-Times the GOP “and our country have no place for Nazis like Arthur Jones. We strongly oppose his racist views and his candidacy for any public office, including the 3rd Congressional District.”

Jones told the Chicago Tribune he doesn’t support interracial marriage or integration in schools, telling the paper: I don’t believe in equality – period.”

Looking ahead to the November 6 election against either the Democratic incumbent Rep. Dan Lipinski or challenger Marie Newman, Jones told the Tribune, “I’ll have nine months to campaign. I think I have a good chance.”

He will not, however, be reaching out to the Republican president for support. Newsweek quotes Jones as saying he regretted voting for Donald Trump in the 2016 presidential election, because Trump has “surrounded himself with hordes of Jews.”

According to reparations agreement between Germany and Israel in 1952, survivors were entitled to seek compensation for damages caused them by the Nazi persecution. Israeli psychiatrists were asked to write professional opinions about the demands for compensation. Survivors who were not former citizens of Germany, or were not part of the German cultural milieu, were entitled to seek a disability pension.

Psychiatrist Kurt Blumenthal went so far as to claim that many survivors were just pretending to have mental problems, when he wrote in 1953 about “compensation neurosis” or “purposeful neurosis,” which was ostensibly characterized by an attempt to portray oneself as having suffered great damage in order to increase compensation one would receive… More

Even scams… If these crooks will even scam their own kind, imagine what wouldn’t they do to the goys (gentiles)?

Stealing From the Dying: The Horror of Holocaust Fraud

Six of the alleged scam artists worked for the Conference on Jewish Material Claims Against Germany and helped orchestrate 5,500 bogus applications over 16 years. prosecutors charged.

The conference administers funds to those who fled Nazi persecution or survived concentration camps. Among those charged was Semyon Domnitser, a former director of the conference.

The Justice Department has just announced that more than $40 million in funds earmarked for aid to needy and aging survivors of the Nazi Holocaust have instead been stolen and fraudulently distributed to thousands of people who were not at all eligible to receive them.

Worse yet is the news that this massive criminal fraud was carried out in exchange for kickbacks by an insider ring of employees of the Conference On Jewish Material Claims – the New York based central body charged with coordinating billions of dollars in restitution of money and property stolen by the Nazis and their willing helpers from Europe’s Jews before and during World War II.

According to the FBI, the insiders who were responsible for verifying claims at the Conference signed off on bogus applications submitted in large part by Russian Jewish immigrants who filed false claims they had lost their homes and belongings during the Nazi era.

Among the alleged ringleaders: Semen Domnitser, the Claims Conference official responsible for overseeing case files and making sure they were in order. The FBI charges that Domnitser worked with a ring of crooked Claims Conference case workers who shared in the kickbacks.

According to one report, among the funds allegedly ripped off: the so-called “Hardship Fund” which pays approximately $3,600 in a lump sum to individuals from the former Soviet Union and other Eastern European countries who can prove they not only lost their homes, but remained in hiding during World War II. Other victims can claim payments up to $21,000 annually if they can show they ere forced to lived under any harsh conditions during the Nazi-era … More

10 Hard Facts about the Holocaust Scam

It looks like Zionists need to study Ethics more than Eugenics.

« “I choose a lazy person to do a hard job. Because a lazy person will find an easy way to do it.” Bill Gates
Two Italian soldiers guarding a bridge in Montenegro check the I.D. of a local peasant, 1942. »