How else can you explain this phenomenon? 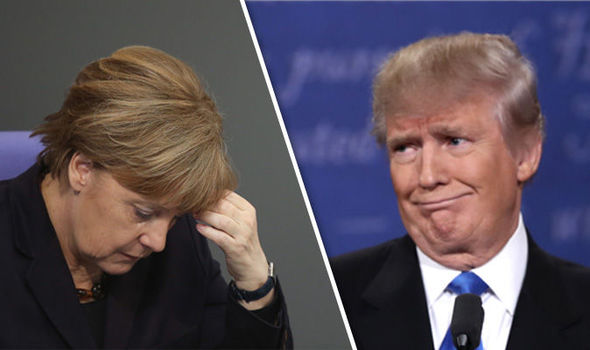 German officials will start censoring ‘offensive’ websites that embarrass Chancellor Merkel’s government and report the truth about the migrant crisis.

A new German law named “The Netzwerkdurchsetzungsgesetz” (NetzDG) came into effect on the 1st Janary, 2018, after passing at the end of June 2017.

DW.com reports: NetzDG has been in force since October, but the government gave companies a three-month grace period to install the new complaint management systems. As of Monday, content such as threats of violence and slander must be deleted within 24 hours of a complaint being received, or within seven days if cases are more legally complex. The companies are also obliged to produce a yearly report detailing how many posts they deleted and why.

If the deadlines are breached, companies can be fined up to €50 million ($60 million), and people can report violations to Germany’s Federal Office of Justice (BfJ), which has made an online form available for the purpose.

Google has also created an online form to report content, while Twitter has added an option to its existing report function that specifies “comes under the NetzDG.” Facebook has set up a more complex system, independent of its reporting options, which requires users to find a special page, take a screenshot of the offending post, and choose one of 20 offenses that the post is allegedly committing. People do not have to be registered users of the network to report content.

Meanwhile, some internet platforms have engaged outside companies like Arvato and the Competence Call Center to handle complaints – which is likely to be a major challenge: Facebook says it already receives hundreds of thousands of reports per week.

The law has received plenty of resistance, particularly from the far-right Alternative for Germany (AfD), who have branded NetzDG as a “censorship law.” One of the party’s deputy leaders, Beatrix von Storch, fell foul of the law on its first day, and was temporarily suspended from Twitter. Her account was restored within a few hours, minus a highly displeased tweet in response to Cologne police sending out a message in Arabic.

But journalist organizations like Reporters Without Borders and internet activists have also raised objections, not least because the government has deliberately left the task of deleting content or blocking users to the internet platforms themselves, rather than having courts make decisions. Some critics argue that that means it will become difficult to tell why individual posts have been deleted.

Meanwhile, lawyers testifying at parliamentary hearings expressed concerns that NetzDG would violate government neutrality codes in the German Basic Law. “It is certainly possible that the head of state could take direct influence,” lawyer Simon Assion told the Süddeutsche Zeitung. “The Justice Ministry has access to how social networks implement their deleting mechanisms.”

In a statement released earlier last year, when the draft of the law was being passed through parliament, the non-profit internet rights organization Digitale Gesellschaft (“digital society”) said the law had been hastily conceived and did no more than push a huge social problem onto the plate of internet companies.

“Fighting prosecutable hate speech is a task for the whole of society, tackling it can only succeed on the basis of a thought-through, coherent concept via a joint effort by civil society,” said Volker Tripp, political director of Digitale Gesellschaft. “Unilaterally shifting this responsibility onto companies is legally questionable and on top of that not productive.”

Another criticism has been that the companies simply delete the posts without informing authorities, which means the people actually posting them will go unpunished (unless a user threatens to commit a violent crime or posts child pornography – in which case the companies are supposed to pass on details to police).

There are also plenty of mistakes. Most recently, Mike Samuel Delberg, a representative of Germany’s Jewish community organization, had his Facebook account suspended after he uploaded a much-publicized video of restaurant owner Yorai Feinberg facing an anti-Semitic rant on the streets of Berlin. Facebook only reinstated the account after a flood of complaints.

The German Justice Ministry has been putting increasing pressure on social media sites since 2015, when many people began posting racist and xenophobic content in the aftermath of the refugee influx.

Though Facebook initially promised to deal with the problem itself by setting up its own task force, Justice Minister Heiko Maas eventually decided that a law was necessary.

Ever wonder why Google would give you great searches for free?

Now you know about the biggest psyop there is.

Winterhawk772: I don’t know if I believe you, let me Google that real quick.

idoitforthekeks: Oh yes Wikipedia is such a solid site of 100% real information. Nothing made up on there, nope.

Sound familiar? “(IT guy) belatedly admitted he had permanently erased an archive of her messages in 2015 after they had been subpoenaed by Congress.”

Ninjakick666: From State Dept’s tiny little email release today… Justin Cooper -> HRC… talks about how her e-mail might have spyware so they shouldn’t copy all of it over to new blackberry.

“Berry service was down earlier so that my have been the issue.
Can still get you a new berry but probably not before you leave tomorrow.
Do you want to try the newer kind with the pad (huma has ) instead of the ball ?
On switching the info — your contacts and settings will all transfer as will a certain number of messages.
All of your older messages will remain on the server.
There is a way for me to move everything on to the new device but the security whizzes have convinced me that this is a horrible thing to do because you also transfer any viruses, spyware and junk overseas providers hide on there.
We also have some new security features and polices that I would like to add to any new berry you have — the most noticeable difference will require a more complex password.
It is a constant fight to keep up with the security measures and unfortunately we keep seeing reminders of why we need to.”

maluminse: SS: This article references, possibly, a redditor which sought advice on Reddit as to how to delete information from a server.
As well it addresses the conspiracy regarding the FBI’s bias for Clinton.

skorponok: But no justice will come because no one else has the courage to do the right thing