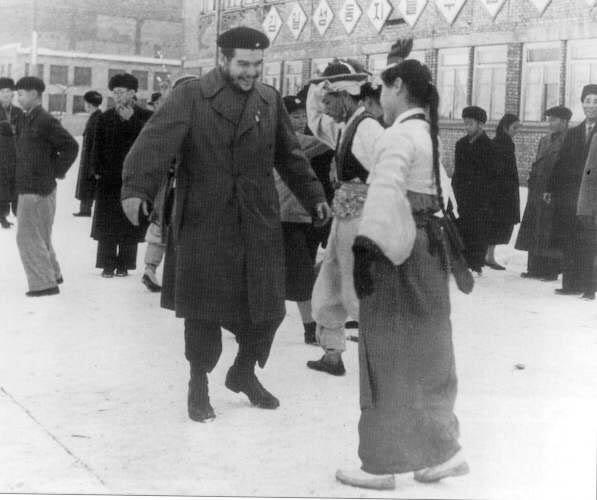 History
Cuba has been one of North Korea’s most consistent allies.[3] North Korean media portrays Cubans as comrades in the common cause of socialism.[4] During the Cold War, North Korea and Cuba forged a bond of solidarity based on their militant positions opposing American power.

Che Guevara, then a Cuban government minister, visited North Korea in 1960 and proclaimed it a model for Cuba to follow.[2] In 1968, Raúl Castro stated their views were “completely identical on everything”.[5] Cuban leader Fidel Castro visited in 1986.[6] Cuba was one of the few countries that showed solidarity with North Korea by boycotting the Seoul Olympics in 1988.

In 2013, a North Korean ship, the Chong Chon Gang, was searched while travelling through the Panama Canal and found to be carrying weapons from Cuba, apparently to be repaired in North Korea and returned.[7] The ship was later handed back to the North Korean government.

In January 2016, North Korea and Cuba established a barter trade system. Also in 2016, the Workers’ Party of Korea and the Communist Party of Cuba met to discuss strengthening ties.[3] After Fidel Castro’s death in 2016, the North Korean government declared a three-day mourning period and sent an official delegation to his funeral.[6] North Korean leader Kim Jong-un visited the Cuban embassy in Pyongyang to pay his respects.

Previous Post: « Muhammad Ali Vs. Cleveland Williams. They fought each other at the Astrodome in Houston on November 14, 1966. Ali won the bout through a TKO in the third round. It was in this fight that Ali unveiled for the first time “the Ali shuffle”
Next Post: “Violent, irrational, intolerant, allied to racism and tribalism and bigotry …” Christopher Hitchens »