“Violent, irrational, intolerant, allied to racism and tribalism and bigotry, invested in ignorance and hostile to free inquiry, contemptuous of women and coercive toward children: organized religion ought to have a great deal on its conscience.”
― Christopher Hitchens, god is Not Great: How Religion Poisons 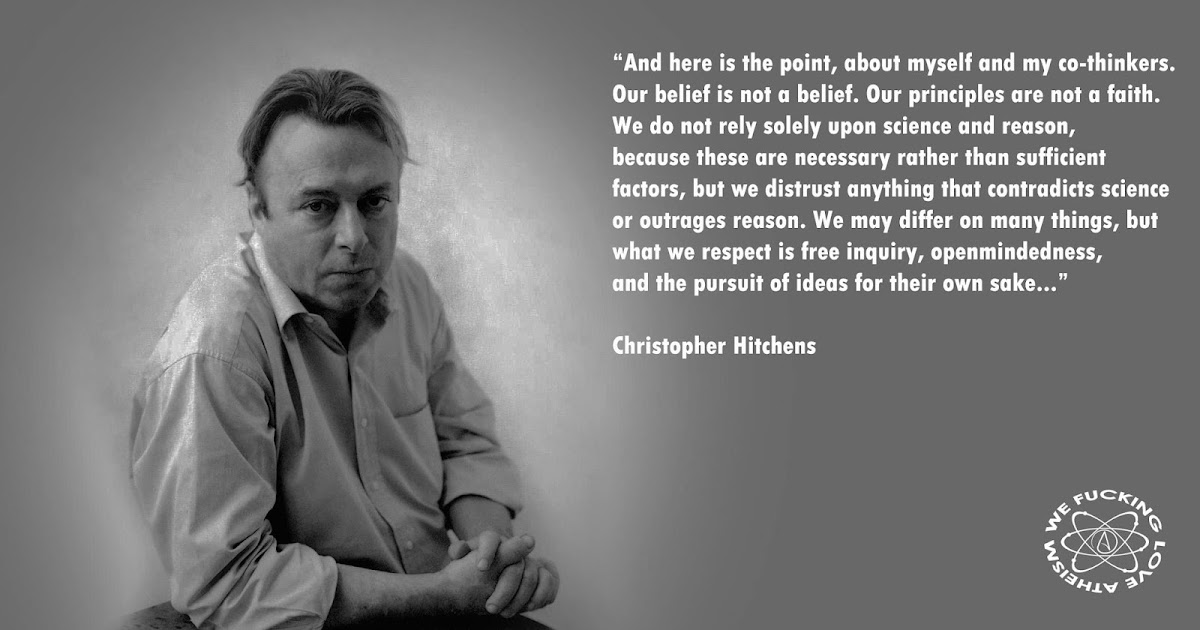 “To terrify children with the image of hell, to consider women an inferior creation—is that good for the world?”

“Everybody does have a book in them, but in most cases that’s where it should stay.”

“Beware the irrational, however seductive. Shun the ‘transcendent’ and all who invite you to subordinate or annihilate yourself. Distrust compassion; prefer dignity for yourself and others. Don’t be afraid to be thought arrogant or selfish. Picture all experts as if they were mammals. Never be a spectator of unfairness or stupidity. Seek out argument and disputation for their own sake; the grave will supply plenty of time for silence. Suspect your own motives, and all excuses. Do not live for others any more than you would expect others to live for you.”

“Human decency is not derived from religion. It precedes it.”

“The essence of the independent mind lies not in what it thinks, but in how it thinks.”

“We keep on being told that religion, whatever its imperfections, at least instills morality. On every side, there is conclusive evidence that the contrary is the case and that faith causes people to be more mean, more selfish, and perhaps above all, more stupid.”

“What is it you most dislike? Stupidity, especially in its nastiest forms of racism and superstition.”

“What do you most value in your friends?
Their continued existence.”

“About once or twice every month I engage in public debates with those whose pressing need it is to woo and to win the approval of supernatural beings. Very often, when I give my view that there is no supernatural dimension, and certainly not one that is only or especially available to the faithful, and that the natural world is wonderful enough—and even miraculous enough if you insist—I attract pitying looks and anxious questions. How, in that case, I am asked, do I find meaning and purpose in life? How does a mere and gross materialist, with no expectation of a life to come, decide what, if anything, is worth caring about?

Depending on my mood, I sometimes but not always refrain from pointing out what a breathtakingly insulting and patronizing question this is. (It is on a par with the equally subtle inquiry: Since you don’t believe in our god, what stops you from stealing and lying and raping and killing to your heart’s content?) Just as the answer to the latter question is: self-respect and the desire for the respect of others—while in the meantime it is precisely those who think they have divine permission who are truly capable of any atrocity—so the answer to the first question falls into two parts. A life that partakes even a little of friendship, love, irony, humor, parenthood, literature, and music, and the chance to take part in battles for the liberation of others cannot be called ‘meaningless’ except if the person living it is also an existentialist and elects to call it so. It could be that all existence is a pointless joke, but it is not in fact possible to live one’s everyday life as if this were so. Whereas if one sought to define meaninglessness and futility, the idea that a human life should be expended in the guilty, fearful, self-obsessed propitiation of supernatural nonentities… but there, there. Enough.”
― Christopher Hitchens, Hitch-22: A Memoir

“Many religions now come before us with ingratiating smirks and outspread hands, like an unctuous merchant in a bazaar. They offer consolation and solidarity and uplift, competing as they do in a marketplace. But we have a right to remember how barbarically they behaved when they were strong and were making an offer that people could not refuse.”
― Christopher Hitchens, god is Not Great: How Religion Poisons Everything

“[E]xceptional claims demand exceptional evidence.”
― Christopher Hitchens, god is Not Great: How Religion Poisons Everything
tags: atheism, atheist, evidence, god, noremorse, science 435 likes Like
“MT [Mother Teresa] was not a friend of the poor. She was a friend of poverty. She said that suffering was a gift from God. She spent her life opposing the only known cure for poverty, which is the empowerment of women and the emancipation of them from a livestock version of compulsory reproduction.”

“I suppose that one reason I have always detested religion is its sly tendency to insinuate the idea that the universe is designed with ‘you’ in mind or, even worse, that there is a divine plan into which one fits whether one knows it or not. This kind of modesty is too arrogant for me.”
― Christopher Hitchens, Hitch-22: A Memoir

“Our belief is not a belief. Our principles are not a faith. We do not rely soley upon science and reason, because these are necessary rather than sufficient factors, but we distrust anything that contradicts science or outrages reason. We may differ on many things, but what we respect is free inquiry, openmindedness, and the pursuit of ideas for their own sake.”
― Christopher Hitchens, god is Not Great: How Religion Poisons Everything

“For God so loved the world, that he gave his only begotten Son, that whosoever believeth in him will believeth in anything. – Hitchens 3:16”

“The Bible may, indeed does, contain a warrant for trafficking in humans, for ethnic cleansing, for slavery, for bride-price, and for indiscriminate massacre, but we are not bound by any of it because it was put together by crude, uncultured human mammals.”
― Christopher Hitchens, god is Not Great: How Religion Poisons Everything

“My own opinion is enough for me, and I claim the right to have it defended against any consensus, any majority, anywhere, any place, any time. And anyone who disagrees with this can pick a number, get in line, and kiss my ass.”

“[Said during a debate when his opponent asserted that atheism and belief in evolution lead to Nazism:]

Atheism by itself is, of course, not a moral position or a political one of any kind; it simply is the refusal to believe in a supernatural dimension. For you to say of Nazism that it was the implementation of the work of Charles Darwin is a filthy slander, undeserving of you and an insult to this audience. Darwin’s thought was not taught in Germany; Darwinism was so derided in Germany along with every other form of unbelief that all the great modern atheists, Darwin, Einstein and Freud were alike despised by the National Socialist regime.

Now, just to take the most notorious of the 20th century totalitarianisms – the most finished example, the most perfected one, the most ruthless and refined one: that of National Socialism, the one that fortunately allowed the escape of all these great atheists, thinkers and many others, to the United States, a country of separation of church and state, that gave them welcome – if it’s an atheistic regime, then how come that in the first chapter of Mein Kampf, that Hitler says that he’s doing God’s work and executing God’s will in destroying the Jewish people? How come the fuhrer oath that every officer of the Party and the Army had to take, making Hitler into a minor god, begins, “I swear in the name of almighty God, my loyalty to the Fuhrer?” How come that on the belt buckle of every Nazi soldier it says Gott mit uns, God on our side? How come that the first treaty made by the Nationalist Socialist dictatorship, the very first is with the Vatican? It’s exchanging political control of Germany for Catholic control of German education. How come that the church has celebrated the birthday of the Fuhrer every year, on that day until democracy put an end to this filthy, quasi-religious, superstitious, barbarous, reactionary system?

Again, this is not a difference of emphasis between us. To suggest that there’s something fascistic about me and about my beliefs is something I won’t hear said and you shouldn’t believe.”

“What can be asserted without evidence can also be dismissed without evidence.”
― Christopher Hitchens, god is Not Great: How Religion Poisons Everything
tags: evidence, skepticism 287 likes Like
“How dismal it is to see present day Americans yearning for the very orthodoxy that their country was founded to escape.”

“To the dumb question “Why me?” the cosmos barely bothers to return the reply: why not?”

“To be the father of growing daughters is to understand something of what Yeats evokes with his imperishable phrase ‘terrible beauty.’ Nothing can make one so happily exhilarated or so frightened: it’s a solid lesson in the limitations of self to realize that your heart is running around inside someone else’s body. It also makes me quite astonishingly calm at the thought of death: I know whom I would die to protect and I also understand that nobody but a lugubrious serf can possibly wish for a father who never goes away.”
― Christopher Hitchens, Hitch-22: A Memoir

“Violent, irrational, intolerant, allied to racism and tribalism and bigotry, invested in ignorance and hostile to free inquiry, contemptuous of women and coercive toward children: organized religion ought to have a great deal on its conscience.”
― Christopher Hitchens, god is Not Great: How Religion Poisons Everything

“One must state it plainly. Religion comes from the period of human prehistory where nobody—not even the mighty Democritus who concluded that all matter was made from atoms—had the smallest idea what was going on. It comes from the bawling and fearful infancy of our species, and is a babyish attempt to meet our inescapable demand for knowledge (as well as for comfort, reassurance and other infantile needs). Today the least educated of my children knows much more about the natural order than any of the founders of religion, and one would like to think—though the connection is not a fully demonstrable one—that this is why they seem so uninterested in sending fellow humans to hell.”
― Christopher Hitchens, god is Not Great: How Religion Poisons Everything

“Alcohol makes other people less tedious, and food less bland, and can help provide what the Greeks called entheos, or the slight buzz of inspiration when reading or writing. The only worthwhile miracle in the New Testament—the transmutation of water into wine during the wedding at Cana—is a tribute to the persistence of Hellenism in an otherwise austere Judaea. The same applies to the seder at Passover, which is obviously modeled on the Platonic symposium: questions are asked (especially of the young) while wine is circulated. No better form of sodality has ever been devised: at Oxford one was positively expected to take wine during tutorials. The tongue must be untied. It’s not a coincidence that Omar Khayyam, rebuking and ridiculing the stone-faced Iranian mullahs of his time, pointed to the value of the grape as a mockery of their joyless and sterile regime. Visiting today’s Iran, I was delighted to find that citizens made a point of defying the clerical ban on booze, keeping it in their homes for visitors even if they didn’t particularly take to it themselves, and bootlegging it with great brio and ingenuity. These small revolutions affirm the human.”
― Christopher Hitchens, Hitch-22: A Memoir 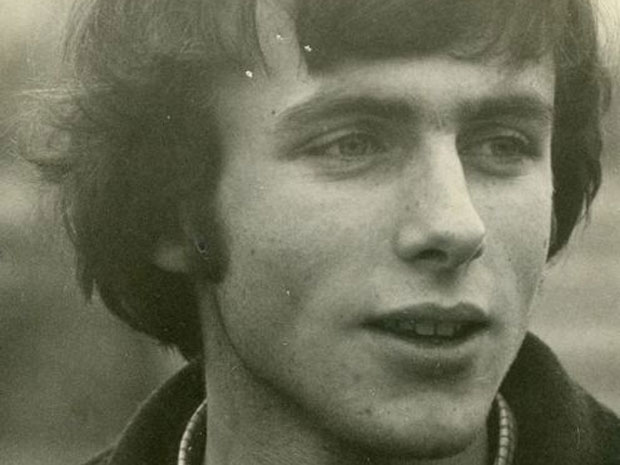