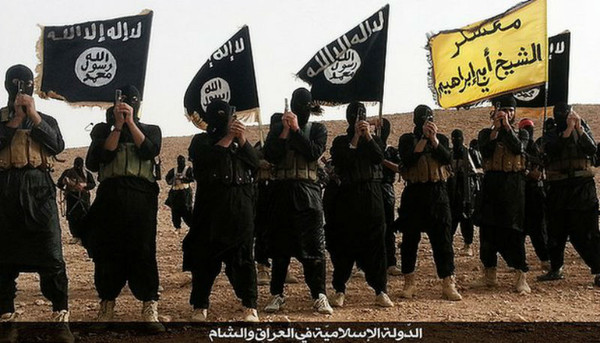 Q: IF Mossad is ISIS (& US knows this) and the US bombs ISIS, then Israel is confirming the lives (of ISIS-Mossad) are expendable because their real intent is to start WWIII? (Obviously they don’t give a damn about the ppl of Iraq)

There must be a way to stop (or stall) this before it gets started… Iran could be next.

An international arms watchdog has found evidence that most ISIS weapons are supplied exclusively by the United States and Saudi Arabia.

According to a damning report by the EU’s Conflict Armament Research, most of the weapons that end up in the hands of ISIS militants are purchased from Eastern European stockpiles belonging to the U.S. or Saudi Arabia.

Amityunderground.com reports: In many cases there is clear evidence to suggest that the arms were transferred into ISIS possession in less than a month, as US-backed groups amalgamated into ISIS or the weapons were sold on a thriving black market.

A significant proportion of the weapons examined were unauthorised for retransfer, meaning that they had End User Clauses for US and Saudi military or police use that were quickly violated, not even being shipped to their country of authorised usage in many cases.

One item inspected by CAR in May 2015 was a Bulgarian PG-7T 40 mm rocket. The Government of Bulgaria confirmed that it exported the item to the US Department of the Army through the US company Kiesler Police Supply. The application for the export licence was accompanied by the original EUC issued by the US Department of the Army (with a non-re-export clause) as well as a delivery verification certificate. The rocket ultimately ended up with IS forces near Al Hasakah, before YPG forces liberated the town and sent the rocket to CAR for examination.

Cases like this go on and on with various rocket launchers, explosives and assault rifles of predominantly Bulgarian and Romanian manufacture, but with one US importer coming up every time: Kiesler Police Supply.

According to the report:

On its website, Kiesler Police Supply only advertises itself as providing equipment to US national law enforcement agencies. However, the company has been contracted in the past to supply weapons to Iraq.

In 2004, Kiesler Police Supply was awarded a multi-million dollar contract to provide weapons such as AK-pattern assault rifles and ammunition to Iraqi security forces.36 On 4 October 2016, CAR called Kiesler Police Supply to request further information regarding the multiple weapon transfers described in this report.

The company declined to comment. On 20 October 2016, CAR emailed and faxed an information request for all the items traced to Kiesler Police Supply. The company has yet to respond to CAR’s request for information.

As CAR beautifully put it, their ‘findings are a stark reminder of the contradictions inherent in supplying weapons into armed conflicts in which multiple competing and overlapping non-state armed groups operate.’ In other words, only a fucking moron would be unable to predict that pumping weapons into the hands of farmers living in ISIS territory would result in anything other than ISIS militants gaining possession of shiny new toys. Or, more conceivably, this wasn’t a strategic error on behalf of the US, and arming ISIS in order to destabilise the regime of the uncooperative Bashar Al-Assad was part of the plan all along.

Another NATO member, Turkey, are exposed. Kurds are, as always, stuck in the middle.

Chemicals used by the caliphate to create IEDs and other makeshift explosives, on the other hand, were almost entirely procured via Turkey. Sequential serial numbers on tankers and evidence of the same batch being used for large productions suggest that ISIS were able to conspicuously acquire the chemicals in bulk from Turkish brokers, denying Erdogan’s Turkish government any kind of plausible deniability of knowledge of ISIS custom within their borders.

Kurdish Syrians living in the autonomous Rojava community on the Turkish border have long accused Erdogan of funding ISIS in order to destroy the successfully autonomous Kurdish region and thus kill hope of any further Kurdish rebellion taking hold on the Turkish side of the border. Revelations from the report add further credence to these claims.

The Syrian YPG who defend the autonomous Kurdish region of Syria with the backing of the United States must be asking questions about how their enemies ISIS have received such formidable assistance – intentional or otherwise – from their supposed American allies and the American NATO partners Turkey. The YPG’s acceptance of US military aid was a pragmatic move by Kurdish leadership who were desperately short on military hardware to defend their people against ISIS attacks, however hardline anti-imperialists will use the evidence of US and Turkish actions which fomented the rise of ISIS to argue that the YPG are being used as American pawns in an effort to remove the Assad regime rather than Western forces genuinely valuing the peaceful Kurds’ right to self-determination.

Brookings Institute: Which Path to Persia

President Donald Trump took credit for the fact that ISIS is in retreat during an interview Tuesday, claiming that ISIS wasn’t on the run before because “you didn’t have Trump as your president.”

When Plante asked why that hadn’t happened before, Trump took the bait.

“Because you didn’t have Trump as your president,” he said. “It was a big difference, there was a big, big difference if you look at the military now.” (cnn.com)