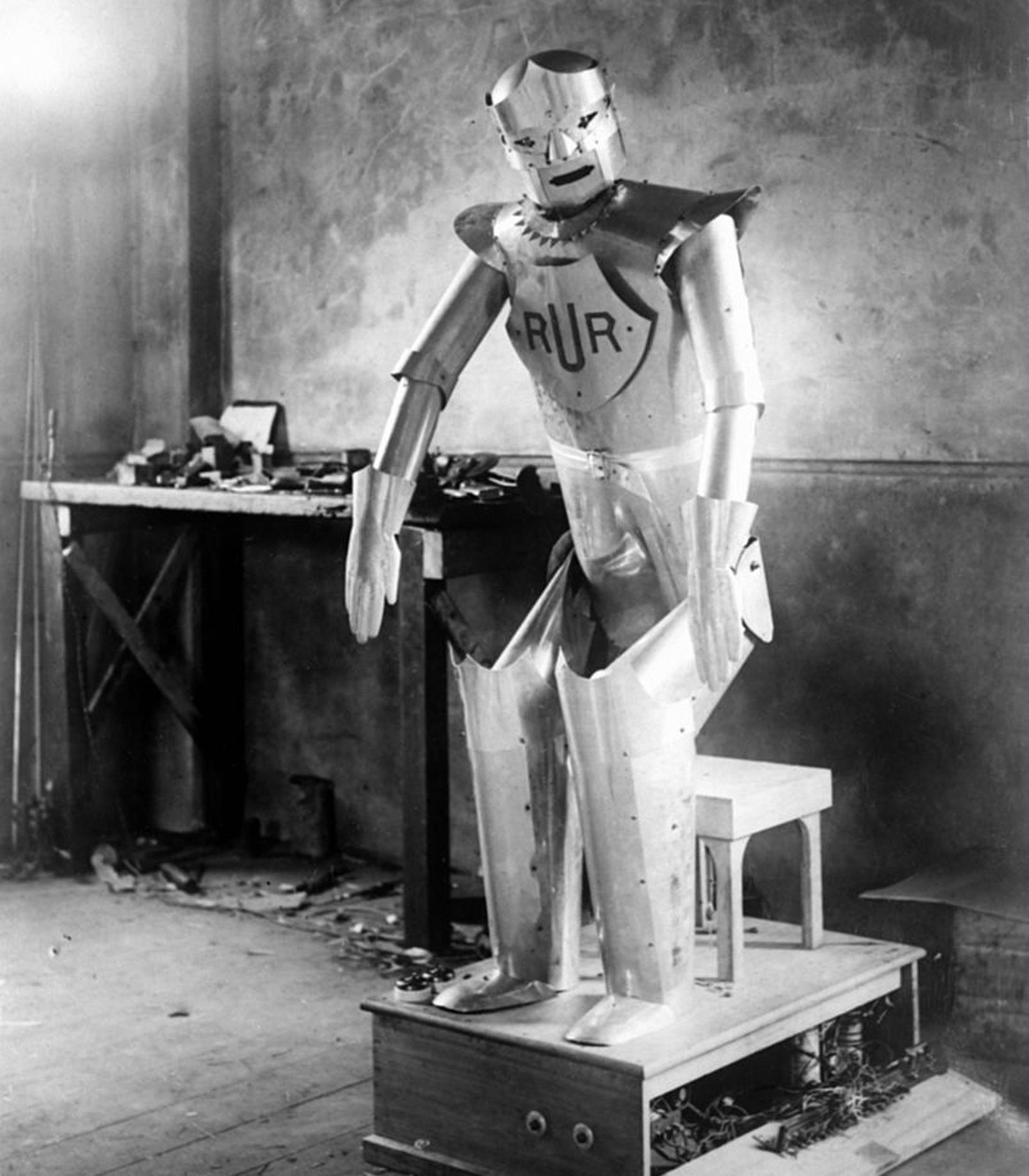 Eric, the 6-foot, 140-pound ‘mechanical man’, was constructed to open the Exhibition of the Society of Model Engineers at London’s Royal Horticultural Hall in 1928. After the Duke of York cancelled, Richards, the exhibition’s secretary, offered to “make a man of tin” to take the Duke’s place. At the event’s opening, on September 20, Eric rose to his feet, bowed, looked to the right, to the left, and, with appropriate gestures, proceeded to give a four minute [opening address.] (http://www.telegraph.co.uk/content/dam/science/2016/05/10/eric2_trans_NvBQzQNjv4Bq9rg-P7f8wNnSS1PPckrMR-dXsnpCz3tP6_Ws0MCzAGg.png?imwidth=1240) [Film footage] (https://www.youtube.com/watch?v=lLmohGA19Ek)

“His exterior was of aluminium, not unlike a mediaeval knight in armour. His eyes were white bulbs with red pupils painted on them. The use of 35,000 volts of electricity causes blue sparks to emanate from his [teeth.] (http://www.theoldrobots.com/images111/Eric_RUR-9.JPG) His feet were fastened to a box, in which there was a twelve-volt electric motor. Inside his body there was another motor, eleven electro-magnets, and about three miles of wire. He could move his arms and his head just as any real man does when speaking.”

According to Wikipedia, “The robot was operated by two people, and Eric’s voice was received live by a radio signal, Richards claiming to be working under a license of the Marconi Company. Although able to sit and stand, Eric could not move his legs to walk.” Eric’s chest was marked with the letters “R.U.R.”. This was a reference to the robot manufacturer in [Karel Čapek’s 1920 play.] (https://en.wikipedia.org/wiki/R.U.R. )

“Following his first appearance, Eric was taken on a US tour, introducing himself to an audience in New York in 1929 as “Eric the robot, the man without a soul”. [More film footage.] (https://www.youtube.com/watch?v=hwnfVRT7IjI) The New York Press described him as “the perfect man”. Sometime after this, Eric disappeared. Having researched Eric’s story, Science Museum curator Ben Russell concluded that “no-one quite knows what happened to him, whether he was blown-up or taken to pieces for spare parts”.

“In 2016, the London Science Museum raised funds through a Kickstarter campaign to rebuild Eric, working from archive material including Illustrated London News photographs. Eric was added to the museum’s permanent collection, and appeared as part of a 2017 robots exhibition.”[Eric is alive again!] (https://www.youtube.com/watch?v=rGbsujbKOeg)

A collection of news articles on [Eric.] (http://cyberneticzoo.com/robots/1928-eric-robot-capt-richards-english/)

Previous Post: « Titanic’s propellers, prior to launch 1911
Next Post: Winston Churchill campaigning in Dundee in 1908, and on the left, Irish suffragette Mary Maloney, who followed him for a week ringing a large bell every time he started to speak. »