Every Great Atheist Had A Religious Education.”

“But it’s atheists who say that the world wasn’t made by anyone, and you say you’re not an atheist . . .”

“I’m not because I can’t bring myself to believe that all these things we see around us—the way trees and fruits grow, and the solar system, and our brains—came about by chance. They’re too well made. And therefore there must have been a creating mind. God.” 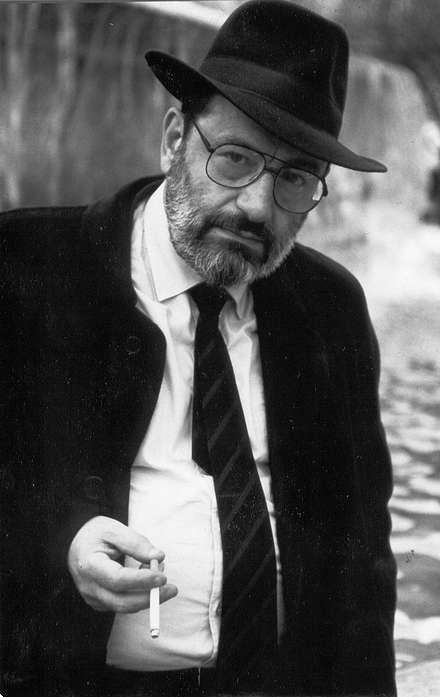 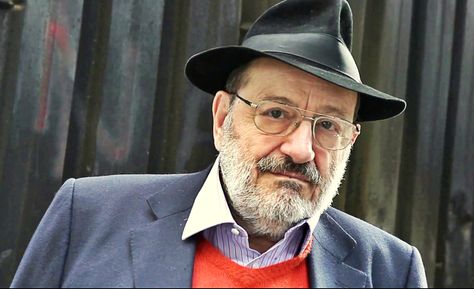 Quotes
I believe that what we become depends on what our fathers teach us at odd moments, when they aren’t trying to teach us. We are formed by little scraps of wisdom.
The real hero is always a hero by mistake; he dreams of being an honest coward like everybody else.
Books are not made to be believed, but to be subjected to inquiry.

“We live for books.”

“Books are not made to be believed, but to be subjected to inquiry. When we consider a book, we mustn’t ask ourselves what it says but what it means…”

“To survive, you must tell stories.”

“I believe that what we become depends on what our fathers teach us at odd moments, when they aren’t trying to teach us. We are formed by little scraps of wisdom.”

“I have come to believe that the whole world is an enigma, a harmless enigma that is made terrible by our own mad attempt to interpret it as though it had an underlying truth.”

“I love the smell of book ink in the morning.”

“When men stop believing in God, it isn’t that they then believe in nothing: they believe in everything.”

“The real hero is always a hero by mistake; he dreams of being an honest coward like everybody else.”

“People are never so completely and enthusiastically evil as when they act out of religious conviction.”

“Then why do you want to know?”

“Absence is to love as wind is to fire: it extinguishes the little flame, it fans the big.”

“What is love? There is nothing in the world, neither man nor Devil nor any thing, that I hold as suspect as love, for it penetrates the soul more than any other thing. Nothing exists that so fills and binds the heart as love does. Therefore, unless you have those weapons that subdue it, the soul plunges through love into an immense abyss.”

“Thus I rediscovered what writers have always known (and have told us again and again): books always speak of other books, and every story tells a story that has already been told.”

“Until then I had thought each book spoke of the things, human or divine, that lie outside books. Now I realized that not infrequently books speak of books: it is as if they spoke among themselves. In the light of this reflection, the library seemed all the more disturbing to me. It was then the place of a long, centuries-old murmuring, an imperceptible dialogue between one parchment and another, a living thing, a receptacle of powers not to be ruled by a human mind, a treasure of secrets emanated by many minds, surviving the death of those who had produced them or had been their conveyors.”

“Love is wiser than wisdom.”

“There are four kinds of people in this world: cretins, fools, morons, and lunatics…Cretins don’t even talk; they sort of slobber and stumble…Fools are in great demand, especially on social occasions. They embarrass everyone but provide material for conversation…Fools don’t claim that cats bark, but they talk about cats when everyone else is talking about dogs. They offend all the rules of conversation, and when they really offend, they’re magnificent…Morons never do the wrong thing. They get their reasoning wrong. Like the fellow who says that all dogs are pets and all dogs bark, and cats are pets, too, therefore cats bark…Morons will occasionally say something that’s right, but they say it for the wrong reason…A lunatic is easily recognized. He is a moron who doesn’t know the ropes. The moron proves his thesis; he has logic, however twisted it may be. The lunatic on the other hand, doesn’t concern himself at all with logic; he works by short circuits. For him, everything proves everything else. The lunatic is all idée fixe, and whatever he comes across confirms his lunacy. You can tell him by the liberties he takes with common sense, by his flashes of inspiration, and by the fact that sooner or later he brings up the Templars…There are lunatics who don’t bring up the Templars, but those who do are the most insidious. At first they seem normal, then all of a sudden…”

“Daytime sleep is like the sin of the flesh; the more you have the more you want, and yet you feel unhappy, sated and unsated at the same time.”

“What is life if not the shadow of a fleeting dream?”

“As the man said, for every complex problem there’s a simple solution, and it’s wrong.”

“I think of the postmodern attitude as that of a man who loves a very cultivated woman and knows that he cannot say to her “I love you madly”, because he knows that she knows (and that she knows he knows) that these words have already been written by Barbara Cartland. Still there is a solution. He can say “As Barbara Cartland would put it, I love you madly”. At this point, having avoided false innocence, having said clearly it is no longer possible to talk innocently, he will nevertheless say what he wanted to say to the woman: that he loves her in an age of lost innocence.”

“Fear prophets, Adso, and those prepared to die for the truth, for as a rule they make many others die with them, often before them, at times instead of them.”

“Any fact becomes important when it’s connected to another.”

“Entering a novel is like going on a climb in the mountains: you have to learn the rhythm of respiration, acquire the pace; otherwise you stop right away.”

“We live for books. A sweet mission in this world dominated by disorder and decay.”

“When you are on the dancefloor, there is nothing to do but dance.”

“Nothing gives a fearful man more courage than another’s fear.”” -”

“We were clever enough to turn a laundry list into poetry.”

“Where else? I belong to a lost generation and am comfortable only in the company of others who are lost and lonely.”

“Monsters exist because they are part of the divine plan, and in the horrible features of those same monsters the power of the creator is revealed.”

« William Lanne, the last “full-blooded” Aboriginal Tasmanian man, 1866 [600×878]
“I guess the only time people think about injustice is when it happens to them.” Charles Bukowski »