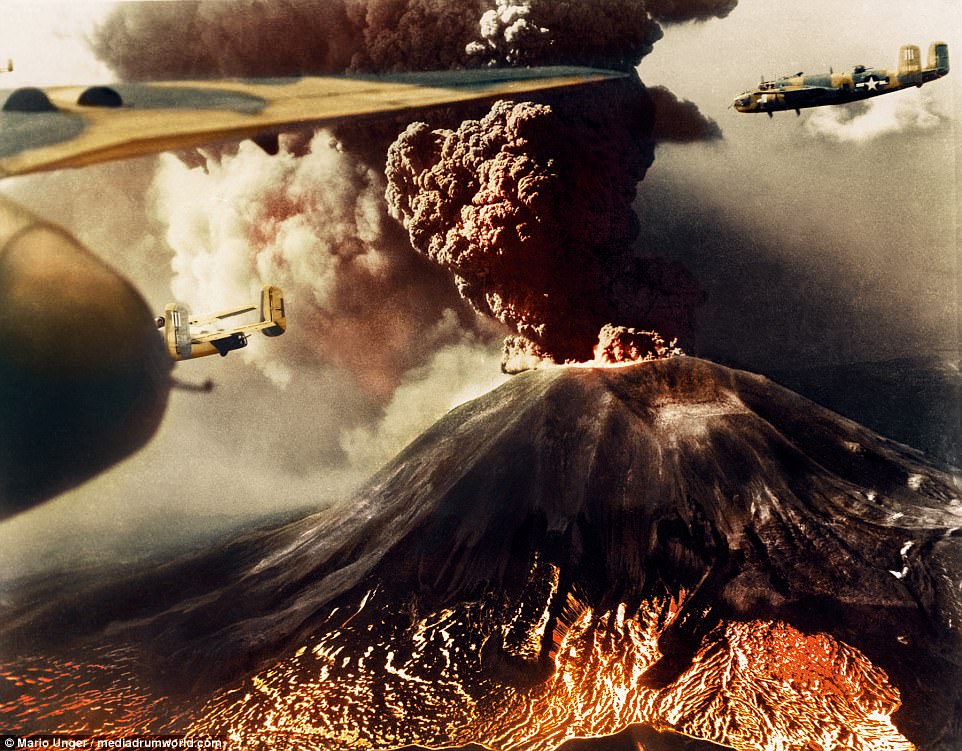 The Italian Campaign of World War II happened to coincide with the last major eruption of Mount Vesuvius. Bad news for the 340th Bombardment Group of the US Army Air Forces, which happened to be based at Pompeii Airfield at the time of the eruption. Yeah. That Pompeii.

Slightly less than 1,900 years after the 79 AD eruption of Mount Vesuvius destroyed the Roman cities of Pompeii and Herculaneum, a group of B–25 Mitchell bombers were stationed a few miles from the foot of the volcano, part of the Allied invasion of Italy proceeding up the Apennine Peninsula. It was March 1944, and Vesuvius was about to erupt.

The eruption would cause one of the heaviest losses to any US bombardment group in World War II. Here’s how it all began, as recalled by Dana Craig from the 486th Bombardment Squadron, on Don Kaiser’s page about the event:

On the day prior, Vesuvius was belching smoke. It was an overcast sky with the threat of rain. About midnight, I went out of my billet to answer the call of nature. While outside, in a mild drizzle, I was hit on the head by what I thought was a small rock. Suspecting some sort of joke, I went inside for a flashlight. When I returned, the light revealed a layer of damp cinders on the ground. We knew at that time that Vesuvius was erupting. We began to feel the earth shake as though a bomb had gone off.

The eruption lasted for five days, between March 18 and March 23. By the time it was over, “nearly all of the 340th’s B–25 Mitchell medium bombers were covered with hot ash that burned the fabric control surfaces, glazed, melted, or cracked the Plexiglass, and even tipped some B-25s onto their tails from the weight of the ash and tephra”, as described by Kaiser. Between 78 and 88 bombers were lost, more than to a severe Luftwaffe raid two months later, but nobody was killed.

Don Kaiser’s page has dozens of fantastic photos of the eruption collected from various public and private sources. There’s a lot of lava. And bombers.

ElurSeillocRedorb: I swear I’ve read accounts that Allied aircrews used the smoke plume as a navigational aid for a short period following the 1944 eruption.

BoinkBoinkEtAliae: Wow it’s even more amazing in color. You lose a lot of the intensity when it’s only black and white.

hstnfld: If I saw this in a movie…I would have called BS. This is stunning!

Crag_r: I wouldn’t want to be the one cleaning out engines and air filters after that

clshifter: Mussolini must have really pissed God off..

Previous Post: « Man abuses a small sheep
Next Post: “Everyone appreciates your honesty, until you’re honest with them. Then you’re an assh*le” George Carlin »