“For after all, the best thing one can do when it is raining is let it rain.” 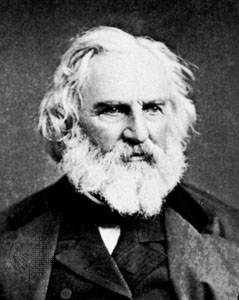 Henry Wadsworth Longfellow
American poet
Henry Wadsworth Longfellow was an American poet and educator whose works include “Paul Revere’s Ride”, The Song of Hiawatha, and Evangeline. Wikipedia
Born: February 27, 1807, Portland, ME
Died: March 24, 1882, Cambridge, MA
Books: The Song of Hiawatha, Evangeline, Paul Revere’s Ride, More
Children: Alice Mary Longfellow, Ernest Wadsworth Longfellow, More
Quotes
Every man has his secret sorrows which the world knows not; and often times we call a man cold when he is only sad.
Into each life some rain must fall.
The heights by great men reached and kept were not attained by sudden flight, but they, while their companions slept, were toiling upward in the night.
« “Alcohol, any way you look at it, is the most toxic and most dangerous of all psychoactive drugs…” Andrew Weil
“If you have ever gone to the woods with me, I must love you very much.” Mary Oliver »