“It requires twenty years for a man to rise from the vegetable state in which he is within his mother’s womb, and from the pure animal state which is the lot of his early childhood, to the state when the maturity of reason begins to appear. It has required thirty centuries to learn a little about his structure. It would need eternity to learn something about his soul. It takes an instant to kill him.”
― Voltaire 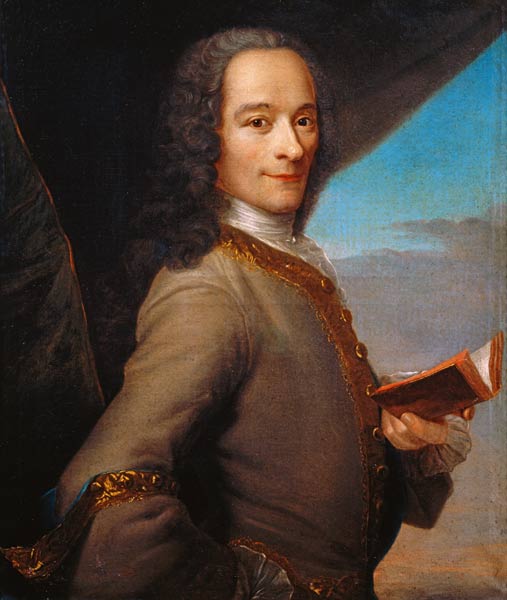 Complete works (1880) : https://archive.org/details/oeuvrescomplte33voltuoft
In 1694, Age of Enlightenment leader Francois-Marie Arouet, known as Voltaire, was born in Paris. Jesuit-educated, he began writing clever verses by the age of 12. He launched a lifelong, successful playwriting career in 1718, interrupted by imprisonment in the Bastille. Upon a second imprisonment, in which Francois adopted the pen name Voltaire, he was released after agreeing to move to London. There he wrote Lettres philosophiques (1733), which galvanized French reform. The book also satirized the religious teachings of Rene Descartes and Blaise Pascal, including Pascal’s famed “wager” on God. Voltaire wrote: “The interest I have in believing a thing is not a proof of the existence of that thing.” Voltaire’s French publisher was sent to the Bastille and Voltaire had to escape from Paris again, as judges sentenced the book to be “torn and burned in the Palace.” Voltaire spent a calm 16 years with his deistic mistress, Madame du Chatelet, in Lorraine. He met the 27 year old married mother when he was 39. In his memoirs, he wrote: “I found, in 1733, a young woman who thought as I did, and decided to spend several years in the country, cultivating her mind.” He dedicated Traite de metaphysique to her. In it the Deist candidly rejected immortality and questioned belief in God. It was not published until the 1780s. Voltaire continued writing amusing but meaty philosophical plays and histories. After the earthquake that leveled Lisbon in 1755, in which 15,000 people perished and another 15,000 were wounded, Voltaire wrote “Poème sur le désastre de Lisbonne” (“Poem on the Lisbon Disaster”): “But how conceive a God supremely good/ Who heaps his favours on the sons he loves,/ Yet scatters evil with as large a hand?”

Voltaire purchased a chateau in Geneva, where, among other works, he wrote Candide (1759). To avoid Calvinist persecution, Voltaire moved across the border to Ferney, where the wealthy writer lived for 18 years until his death. Voltaire began to openly challenge Christianity, calling it “the infamous thing.” He wrote Frederick the Great: “Christianity is the most ridiculous, the most absurd, and bloody religion that has ever infected the world.” Voltaire ended every letter to friends with “Ecrasez l’infame” (crush the infamy — the Christian religion). His pamphlet, “The Sermon on the Fifty” (1762) went after transubstantiation, miracles, biblical contradictions, the Jewish religion, and the Christian God. Voltaire wrote that a true god “surely cannot have been born of a girl, nor died on the gibbet, nor be eaten in a piece of dough,” or inspired “books, filled with contradictions, madness, and horror.” He also published excerpts of Testament of the Abbe Meslier, by an atheist priest, in Holland, which advanced the Enlightenment. Voltaire’s Philosophical Dictionary was published in 1764 without his name. Although the first edition immediately sold out, Geneva officials, followed by Dutch and Parisian, had the books burned. It was published in 1769 as two large volumes. Voltaire campaigned fiercely against civil atrocities in the name of religion, writing pamphlets and commentaries about the barbaric execution of a Huguenot trader, who was first broken at the wheel, then burned at the stake, in 1762. Voltaire’s campaign for justice and restitution ended with a posthumous retrial in 1765, during which 40 Parisian judges declared the defendant innocent. Voltaire urgently tried to save the life of Chevalier de la Barre, a 19 year old sentenced to death for blasphemy for failing to remove his hat during a religious procession. In 1766, Chevalier was beheaded after being tortured, then his body was burned, along with a copy of Voltaire’s Philosophical Dictionary. Voltaire’s statue at the Pantheon was melted down during Nazi occupation. D. 1778.

« “Humans don’t mind hardship, in fact they thrive on it; what they mind is not feeling necessary…” Sebastian Junger
JFK’s funeral at the capitol. November 1963 »