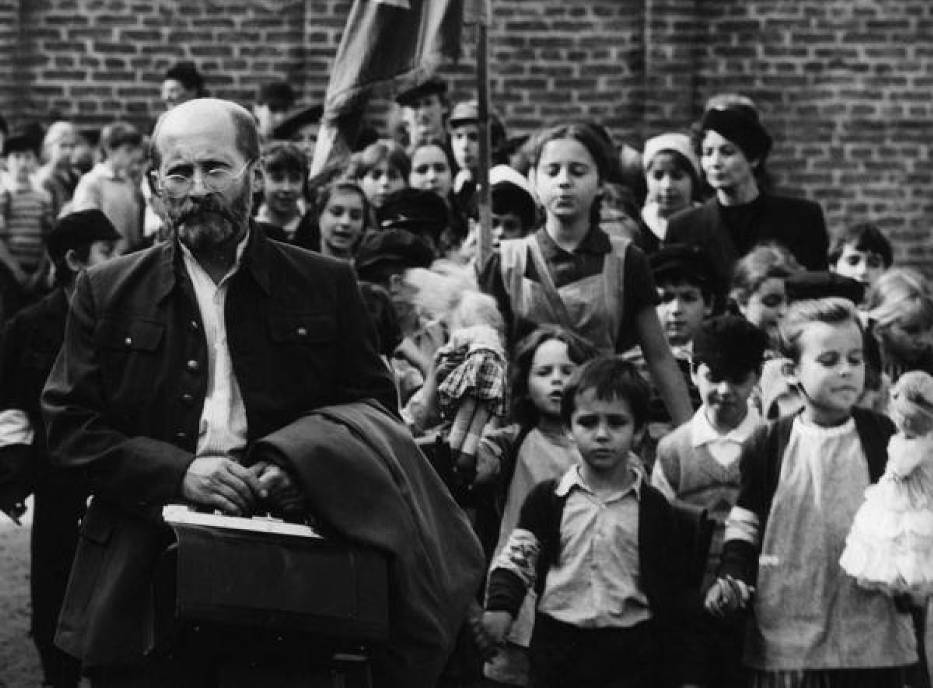 On this International Holocaust Remembrance Day, I am glad I learned about Janusz Korczak. From his Biography.com entry: “His legend began on August 6, 1942, during the early stages of the Nazi liquidation of the Warsaw Ghetto-though his dedication to destitute children was legendary long before the war. When the Germans ordered his famous orphanage evacuated, Korczak was forced to gather together the two hundred children in his care. He led them with quiet dignity on that final march through the ghetto streets to the train that would take them to ‘resettlement in the East’ -the Nazi euphemism for the death camp Treblinka.”

And from Wikipedia: “The children were dressed in their best clothes, and each carried a blue knapsack and a favorite book or toy. Joshua Perle, an eyewitness, described the procession of Korczak and the children through the Ghetto to the Umschlagplatz (deportation point to the death camps):

‘Janusz Korczak was marching, his head bent forward, holding the hand of a child, without a hat, a leather belt around his waist, and wearing high boots. A few nurses were followed by two hundred children, dressed in clean and meticulously cared for clothes, as they were being carried to the altar.’ — Ghetto eyewitness, Joshua Perle

According to a popular legend, when the group of orphans finally reached the Umschlagplatz, an SS officer recognized Korczak as the author of one of his favorite children’s books and offered to help him escape. In another version, the officer was acting officially, as the Nazi authorities had in mind some kind of “special treatment” for Korczak (some prominent Jews with international reputations were sent to Theresienstadt). Whatever the offer, Korczak once again refused. He boarded the trains with the children and was never heard from again.”

OhSoTheBear: It’s too bad they didn’t make a movie about him when Robin Williams was still with us. The resemblance is uncanny.

Previous Post: « “The best time to plant a tree was 20 years ago. The second best time is now.” Chinese Proverb
Next Post: Why should America allows a tiny nation like Israel to boss around? »