Israel: “If Putin Wants To Survive, He better Do What Israel Tells Him”

Israel have threatened Russian President Vladimir Putin with death unless he does what Israel tells him.

Ayelet Shaked, the Israeli Minister of Justice famous for having advocated the extermination of Palestinian children, said: “If Putin wants to survive he had better do what Israel tells him.” 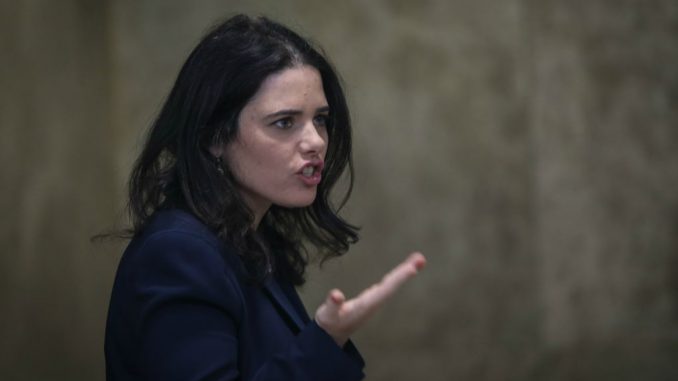 Awdnews.com reports: Obviously the Saker is right in saying there is “Very Dangerous Escalation in Syria” happening right now.

The Israelis are pulling out all the stops to make sure their Oded Yinon plan to smash up Syria into pieces doesn’t get totally derailed.

And to America’s eternal shame, Trump and the US military are acting as Netanyahu’s puppets.

Russia, Syria, and Iran are winning. Israel is the big loser. No wonder Shaked is reduced to lobbing death threats at Vladimir Putin.

Good luck trying to deliver on those threats, Ayelet. You will soon discover that getting to Putin is a lot harder than slaughtering unarmed women and children.

Perhaps Trump’s buddy Putin is another Pence trying to act macho for the time being …?

Mike Pence, while in Israel, pledges to take the U.S. to war against Iran on behalf of Israel in the near future.

“Um, no you f–king won’t. Americans don’t want war. We’re sick of war. Stay the hell out of Iran!”

“Mike Pence needs to shut his mouth. If he wants to be a warmonger, he needs to resign and rid the world of his gross stupidity and bad judgment. As for the Israeli government, we need to cut ties with them and stop supporting them. The things they’ve done to their neighbors and their own citizens are deserving of them being treated like the pariah they truly are. They’ve f–ked over the Palestinians repeatedly, and have messed with their neighbors, including f–king with Iran. If I were the US, I’d withdraw every single last weapons system we’ve given them and let them deal with Iran all on their own. The only reason they act big and bad is because we mistakenly support their government’s sorry and corrupt asses.

We need to focus on our own people and fix the problems we have here. We need to be focusing on mending rifts and helping other countries *resolve* their differences, not create them! If we’re creating differences and waging war, what benefit are our actions really having geopolitically, for everyone involved? If your actions and words aren’t making a positive difference, resign. It’s just that simple.

“Mike Pence is over in Israel promising to spill U.S. blood and spend U.S. treasure in order to more assure the rise of Greater Israel. Meanwhile, the U.S. is in a state of decay on all fronts.”

“What happened to America first, you scumbag? We have homeless, while water that is not safe to drink, poor infrastructure, and healthcare that’s a joke, yet you want to send more money and spill American blood for a Greater Israel? 14 trillion dollars over the last 30 years. Think of all the good that could have done for ouselves. Anyone who thinks our government is “America First” is an idiot.”

“Too bad. America has been completely infected with the infamous “Jewish Parasitic Plague” inside out. It’s not what American want, it’s what the Parasites want. This explains why U.S. as the world #1 Superpower has to take order from a pariah state the size of New Jersey called Israel.

Greater Israel is only a bonus. What they really wanted to impoverish Americans with heaps of war debts. This is how they rob the people … Usually followed by economy collapse, this is yet another bonus for them scoop up all the blue chips and properties practically for free.

“See the big picture? Noticed the scam? This is how Rothchilds enslave the world.

We need a new Abraham Lincoln, Thomas Jefferson, or John F. Kennedy to get rid of the Federal Reserve. Money must be printed by the people, not by a few elite fake Jew banking cabals. Otherwise, folks will be enslaved till the end of time.”

“To that end, the United States will continue to work with Israel, and with nations across the world, to confront the leading state sponsor of terror – the Islamic Republic of Iran.” VP Pence, sucking up to Israel as usual.

Pence is a real danger to this nation and the world going forward. I suggest people take the few minutes time it takes to simply read his own words in a speech he just gave before the Knesset, the real capitol of the USA. This is one of main reason why do they to have war with Iran?

And U.S. being the world’s #superpower is helping the parasites to enrich themselves by doing dirty job like this one …

The US forced Iraqis to buy seeds from Monsanto making the use of their own seeds illegal. “U.S. declares Iraqis can not save their own seeds”

“As part of sweeping “economic restructuring” implemented by the Bush Administration in Iraq, Iraqi farmers will no longer be permitted to save their seeds, which include seeds the Iraqis themselves have developed over hundreds of years. Instead, they will be forced to buy seeds from US corporations. That is because in recent years, transnational corporations have patented and now own many seed varieties originated or developed by indigenous peoples. In a short time, Iraq will be living under the new American credo:

Why are the genocides of people of color (Native Americans, Africans, Arabs etc) not mentioned or acknowledged as much as the genocide of white Jews during the holocaust?

And why is it that when Europeans commit these genocides, the history of it is pushed away from public memory unless the genocide was against another European group?

I mean no offense. I just want to understand why these things occur and the agenda behind it.

“He who controls the supply of money control the world.” – Goodizen.com

Now you see why FED a private company (listed next to Federal Express in the White Pages) is allowed the monopoly to print any amount of currency (for profit) enslaving folks with debts and inflation that will improvise Americans forever, yet the FED is not answerable to anyone. All the power and profit, none the responsibility.

Some 130,000 Ethiopians, most of them Jewish, live in Israel. The community experiences higher poverty and unemployment rates than the rest of the  country’s Jewish population.  In the past decade, the birth rate among Ethiopian-Israelis has declined by at least 20 percent.  Advocacy groups now claim this decline is the result of a birth control regimen forced upon Ethiopian immigrant women.

Moscow in early 1800’s oil paintings, everything is overgrown with vegetation.

I’ve collected some of the best examples below that call into question recent history. The title is tongue and cheek as experts want you to believe that soil can build up 10+ feet in less than a hundred years, because people forgot to sweep their streets.

There are many different aspects to this theory. the evidence seems to indicate an event happening sometime in the 17th century and possibly continuing into the 19th century. In other words possibly some kind of biblical destruction and then subsequent winds carried this layer across the land over the next few decades.

This researcher goes into detail about how it looks like many portraits of supposedly famous wealthy people appear to be copies of one single image.

I’ve collected a variety of mainstream articles that discuss this whether they know it or not.

[Why was this 16th century Scottish village buried in sand?](http://www.sciencemag.org/news/2017/10/why-was-16th-century-scottish-village-buried-sand)

[According to local folklore, the region was inhabited by Caeté Indians, who woke up one day to find their town covered by sand
](https://en.wikipedia.org/wiki/Len%C3%A7%C3%B3is_Maranhenses_National_Park)

You may say “that would be quite the cover up” and “do we have evidence of massive historical manipulation?” i think we do.

[Why are there Underground Jesuit Caves in Europe filled with Egyptian and Islamic Art?](http://www.messynessychic.com/2016/12/22/why-are-there-underground-jesuit-caves-filled-with-egyptian-and-islamic-art/)

Not to mention the history and nature of serfdom and slavery and just how little influence the average person would have been able to have on the establishments narrative.

DamesEnHeren: Build buildings on soil people start living there, water level drops because less rain gets to the ground and the creation of small waterways help carry extra water away. Land could sink as much a 4 meter.

« Janusz Korczak and his orphans, Warsaw Ghetto, about 1942
Putin’s Banning of Rothschild Banks resulted in Russian Economy Booming and Foreign Debt Reduction by 75% »