A Cuyahoga County judge has ordered YouTube personality Alissa Violet and her boyfriend, Ricky “FaZe” Banks, to stop posting on social media about the Barley House after she set off an online firestorm for accusing staff at the bar of mistreatment. The order also says the two must stay at least 500 feet from the Warehouse District establishment, and have no communication with any employees, including through telephone, online, blogging or social media.

“It is further appearing to this court that enjoining defendants from disseminating false or misleading information related to plaintiffs, their employees and their patrons is reasonable to end Defendants cyber-bullying campaign and is no greater than is required for protection of plaintiffs, their employees and their patrons, and does not impose undue hardship,” Russo wrote in the order.

nuckingfuts73: I managed a bar for years and although I get that the bar is showing the footage they want to show, to me it seems like the staff acted more professionally and calmly than 99% of other bar staffs probably would have. They had a legit concern with him hanging around the managers office late night (twice at our bar someone walked back to the manager’s office and put a knife to their throat when they were counting money) they got everyone out without beating the shit out of someone and then tried to keep the peace and protect customers out front. Bars aren’t always in the right in these situations, but it seems clear that they acted as appropriately as they could.

RiseoftheTrumpwaffen: Don’t forget threatening the life of that dude he punched.

Daring86: He should be nicknamed Friar F**k.

Scorpinox85: What a stupid pair of little twits. Best part of that slackjawed moron ran down his mother’s leg.

throwawayshirt: The wheels of justice are grinding faster than normal on this one.

I could tell this guy is a d*ck.

Tenmar: Can’t really support a person whose idea of an establishment to apologize is to get a person fired.

SumoMoses: I have never heard of any of these people.

rawdawg304: Is this girl famous for sucking dick, or just not famous yet? I never heard of her until this train wreck.

ImUnicornWatchMyHorn: This video shows Barley House’s side of the story. Alissa Violet and Faze Banks are total morons.

916hotdogs: I’ve never heard of Ricky “fAze” Banks, but I suddenly want to see him get his ass beat.

megadeadly: She’s literally chasing the one girl around with her phone while recording her with the flash – no wonder she got smacked

spore_attic: or you could watch it on the other post that is already on the front page with 10K plus up votes…

radditor5: It’s going to be funny when he can’t go out drinking because every bar in town will ban him from the premises. No sane business will want that moron tromping through their front door after this fiasco.

DootDotDittyOtt: Now the world knows he has terrible hair….justice has been served.

nd-lonecart: I hope he enjoyed that $40k video game prize money, because he’s losing allllll that and more once the criminal and civil proceedings start. It’s a shame kids look up to punks like this, he’s trash.

subsonic_slug: Piece of sh*t is revealed to be a piece of sh*t, more at 11

JustWhateverUsername: CBF watching – Learnt nothing, others fault. Say’s hes speechless and doesn’t want to talk about it, proceeds to talk about it more. We all know the routine these ‘people’ go through.

frankiefourshot: This is what happens when you don’t discipline your children and they grow up thinking they should never be punished and that they’re never wrong.

somestupidschit: No customers are sober at the bar at 2AM.

Wonberger: “This surgery on my hand is going to cost so much money” yeah, you tend to break your hand when you sucker punch someone in the back of the head

nownohow: Isn’t this one of those guys who makes YouTube videos like, “I bought a new house!” “I bought a new car!” (Lambo, etc)? I love how he’s claiming now that surgery for his hand is gonna be sooo much money, I think you’ll be okay on that front bro.

Sindawe: Its been a while since I’ve enjoyed some good schadenfreude, made all the sweeter by the fact that this loser so richly deserves the dressing down coming his way. And to think that before today I never even knew he and his girlfriend existed.

Legion681: This dude is so full of it. And by the way, he looks into the camera maybe 20% of the time. Classic sign that he’s lying through his teeth (the bar’s video proves it).

sosoguay: If he called for some sort of harassment from their YouTube channels you’d think that would violate Google’s/YouTube’s terms of service and the accounts would be suspended.

Then what does he have? His girlfriend would be gone in two seconds.

He just be a prematurely balding douche bag with no skills other than being a general horse’s ass.

spaceman_spiffffffff: It’s funny that a guy who spends his whole life being a little douchebag on a camera gets totally sandbagged by a camera. I hope his surgery is a disaster.

valley_pete: How much do you think this dude’s worth? I’ve legit never heard of him before today, and I currently DESPISE him, but apparently he’s like internet famous and that means something.

Either way, if there is a just god he’ll have some charges heading his way. The bottle throwing, the sucker punch from behind, disorderly, etc.

ace980: Even if the bouncer did touch him isn’t it their god damn job to physically remove people of necessary? Before any alteration happened you could see instigation and refusal to leave after being asked smh

PickitPackitSmackit: I have no clue who this guy is, but he seems like a dopey chud

Nvidia_Dragon: He’s playing the “Deny til’ you die” card as I’d put it. It doesn’t even sound like he watched through the entire video from the stuff he talked about. He doesn’t even touch the fact that he threw a glass, or was dancing in front of the security guard. He’s gonna have a bad time in court when visual evidence trumps his witnesses and their statements.

NoMoBluepill: Is that the same dipshit from this video: https://www.youtube.com/watch?v=wZhh59sVjGE

Where he thought him walking into a random suburban mall’s gamestop because of being in an online gaming clan would get him some crazy recognition?

exador6: That continuous video of the whole incident is BULLSHIT, MAN! It’s all lies! /sarc.
What an idiot.

itsMalarky: – Dude complains the narrative isn’t true.
– Says he wasn’t aggressive at all
– Doesn’t mention how there’s clear video of him punching -someone in the back of the head.

Sorry dude – you have no credibility.

jimboslice29: Didn’t know who this douche was before yesterday after watching the Barley House video on the front page. That said, people that say like that much, are usually waiting for their dumb brain to come up with another lie.

brokekatyperry: Well there’s 6 minutes of my life I can never get back. What a joke.

legendary_dan: “I was not drunk.”
Truly unfortunate that’s just what you’re like sober.

superheart: You can tell by his body language, even in the Snapchat video, that he’s lying.

h83r: “I have nothing more to say about this”

Talks for another 4 minutes

nd-lonecart: Poor baby disabled comments. I guess they were fake news too?

TheLongLady: He’s gonna need a lawsuit to teach him a lesson.

itsMalarky: I just watched some videos on his youtube channel. And I…I just…I don’t get it.

Why do people watch this shit? why do people care about this tool? what the fuck is the world coming to? (is it all teenagers?)

Fucks up his finger sucker punching a guy in the back of the head.

I was worried the bar wouldn’t press charges, but it looks like karma’s already getting to this guy.

BestGarbagePerson: Ugh I feel dirty that I even clicked on that. Scum.

speedtoburn: Honestly, the greatest thing about this whole incident was finding out that this Faze Banks guy is bald.

loganlogwood: Who is this douchebag and why should I care about whatever the fuck is going on with his handicapped ass?

Whoever did this, I salute you. 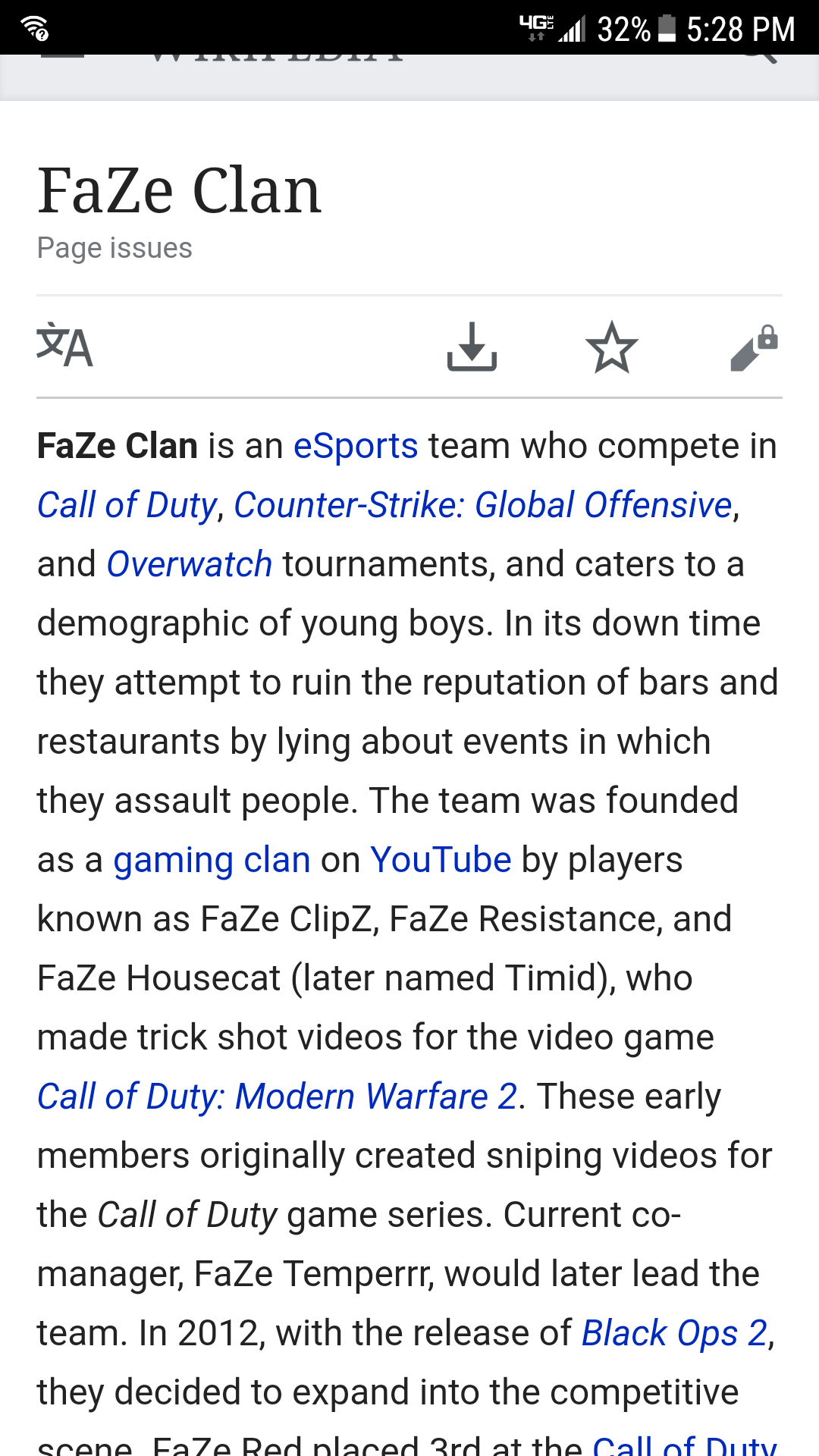