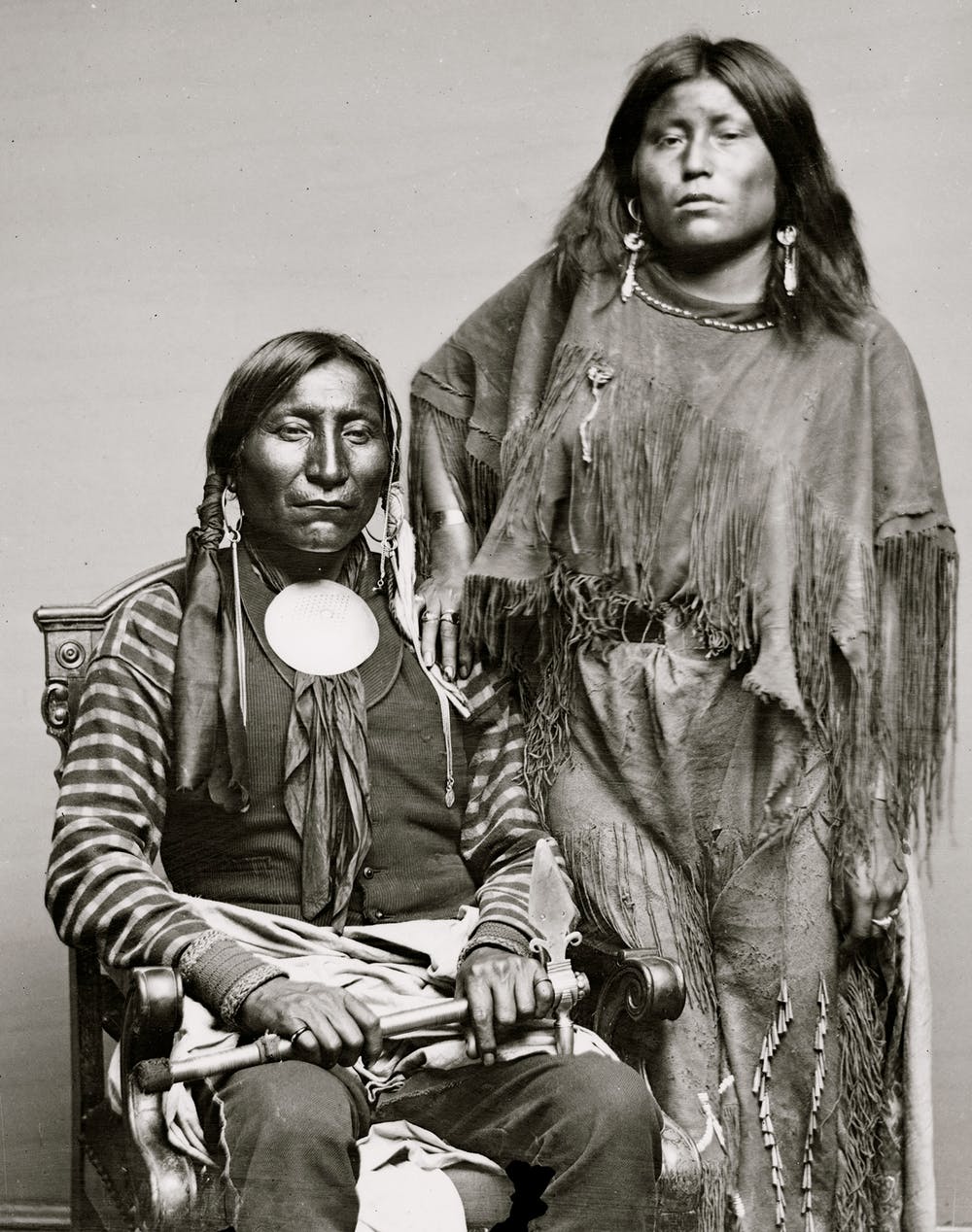 Born around 1820, Lone Wolf was a principal chief of the Kiowa, following the death of Chief Dohäsan. The Kiowa lived in what became Oklahoma, Kansas, and Colorado. In reaction to massive encroachment on their lands by white settlers, buffalo skinners and others, the Kiowa staged punitive raids in the vain hope of driving them out.

Lone Wolf’s Indian name was Guipago. He was a leader among his tribe’s militant minority during the U.S. Army’s armed pacification in the 1860s and ’70s, the period of violent domestication from nomadic to forced reservation life dictated by the federal government.

As a member of the Tsetanma, an elite warrior society, Lone Wolf emerged as a leader among the tribe’s militant factions. In 1863, U.S. Indian agent S.G. Colley accompanied Lone Wolf, among several Indian delegates, to Washington, D.C. to establish a favorable peace policy. In October 18, 1865, Lone Wolf and other prominent chiefs signed the Little Arkansas Treaty with federal representatives.

In the spring of 1866, Lone Wolf led his warriors on a series of raids into Texas. Although he attended the Medicine Lodge Council in Medicine Lodge, Kansas, he did not sign the 1867 Medicine Lodge Treaty. The document did allow the Kiowa to continue their raids to protect their lifeblood, the buffalo, from wholesale slaughter. By the treaty terms, the Kiowas were supposed to remain on their reservation at Fort Sill, Indian Territory, and cease all raids.

Following the treaty of 1867, Lone Wolf led a double life:

His relations with the army were good during the months following the treaty council. He professed his love of peace and harmony openly, and apparently was sincere so long as Texas did not enter into consideration.
Lone Wolf believed that vast buffalo herds were being driven westward by Texans, just to be slaughtered by hide hunters. The Plains tribes’ way of life, religion, and economy depended on buffalo herds, and Lone Wolf knew that the animal and the tribes faced extinction unless he drove the Texans away. Lone Wolf’s hatred of Texans was resolute.

Following Chief Dohäsan’s death in 1868, Lone Wolf shared leadership of the Kiowas with Chief Kicking Bird, head of the peace faction. Lone Wolf was unable to unify the Kiowa tribe.

After the Fort Laramie Treaty failed and warfare resumed in 1868, Chiefs Lone Wolf and Santana agreed to meet with Lt. Colonel George A. Custer under a truce flag. After meeting with Custer, the two chiefs were taken to Fort Cobb, the military headquarters on the Kiowa-Comanche reservation. Once there, General Philip Sheridan ordered them taken into custody and held hostage. Custer threatened to have them hanged if the Kiowa warriors did not agree to return to their reservation.
The threat was effective; most of the Kiowas had agreed to return to the reservation by the time the two chiefs were released in February 1869. Lone Wolf and Santana agreed to keep the peace. Although Lone Wolf spoke of peace during the early 1870s, he was not always able to control the other Kiowa leaders’ actions.

Lone Wolf witnessed the arrest of Chiefs Satank, Big Tree, and Santana by General William T. Sherman at Fort Sill, in the Indian Territory, for perpetrating the Warren Wagon Train Raid of 1871.

On April 30, 1872, Lone Wolf and his son Sitting-in-the-Saddle (Tau-ankia) participated in the attack on a government wagon train at Howard’s Wells, on the San Antonio-El Paso Road, in which 17 Mexican teamsters died. They then fought off a patrol of the Ninth Cavalry from Fort Concho. During the skirmish, a young warrior named Mamadayte rescued the wounded Sitting-in-the-Saddle.

In February 1873, Lone Wolf led 50 braves into Texas on a series of merciless raids in which 18 men, women, and children died. The party returned with 200 horses and mules, plus a big quantity of loot. A month later, he brought a war party to a settlement within five miles of Fort Griffin, where a number of white settlers died and 150 horses were stolen. The Kiowa hero of that raid was Mamadayte, who, alone and on foot, killed three armed white men.

As the army reacted with more pressure, increasing numbers of Indians chose to remain peaceably on the reservation. Although he continued to live outside with his band of warriors, Lone Wolf came to the agency often to express his friendship, while some of his warriors slipped away and went on raids to Texas, frequently under Mamadayte’s direction. When the army started to suspect Lone Wolf and his band of staging those raids, Lone Wolf would bring in some of his men to the agency. That allowed smaller parties to slip away to Texas undetected, while the chief and the bulk of his men remained to appease the army.

In October 1873, Mamadayte took command of about 30 warriors, went south of the Red River, and established a hideaway camp. Secretly crossing the border into Mexico, they staged a raid and then returned to Texas, killing two white men. A rancher got word to the army. Lieutenant Charles L. Hudson and a Fourth Cavalry patrol out of Fort Clark, intercepted the Indians returning with a large herd of stolen livestock. Following a battle in a rocky area, the Indians raced back toward Indian Territory, with the troops in hot pursuit.

Lone Wolf’s son, Sitting-in-the-Saddle, suffering from his wound, fell behind. His 15-year-old cousin, Guitan and several other warriors rejoined him. Any chance of peace between the government and Lone Wolf’s band was crushed when Sitting-in-the-Saddle and Guitan were killed by troops of the Fourth Cavalry on December 10, 1873.

The survivors of that skirmish reached Lone Wolf’s camp in mid January 1874. Safely back in their camp in the Wichita Mountains, the warriors were initially unwilling to return to Texas despite Lone Wolf’s pleading that the dead warriors must be brought home. For two months, he planned an expedition to recover the bodies of Sitting-in-the-Saddle and Guitan, and return them for reburial in Kiowa country.

In March, Lone Wolf and Mamadayte led a small band of hand-picked warriors into Texas. Their absence was detected, and the army sent out five patrols in an attempt to intercept them. The Indians staged one minor raid and recovered the bodies of the slain youths, which had been hidden in a mountain cave. Lone Wolf escaped the pursuing troops, and he reburied his son’s and nephew’s remains on a rocky hill in Mitchell County.

With his hatred for the white man refueled, Lone Wolf was among the combatants in the attack on Adobe Walls on June 27, 1874. In July, his band ambushed and besieged 27 Texas Rangers. During the fight, the rangers suffered two deaths, two wounded, and the loss of most of their horses. The rest of the group escaped defeat only through their rescue by the 10th Cavalry. In the course of that battle, Mamadayte killed a ranger. The young warrior turned the body over to Lone Wolf who, in a fit of rage, cut off the ranger’s head and declared his son avenged. As a reward for Mamadayte’s actions, Lone Wolf adopted him and gave him the name Guopahko, “Lone Wolf the Younger.”

The war party returned to the reservation. In late August, they left on another raid and headed for the Texas Panhandle, where they camped. On September 9, Lone Wolf’s band launched an unsuccessful attack and siege on Captain Wyllys Lyman’s wagon train, sometimes called the Battle of the Upper Washita. The beaten Kiowas retreated into Palo Duro Canyon. Because of that raid, Lone Wolf’s village was among those destroyed by Ranald S. Mackenzie’s troops on September 28.

Despondent, Lone Wolf surrendered his famished band to the military authorities at Fort Sill, on or about February 26, 1875. He was among the leaders the army segregated, owing to their animosity and hostile nature, for incarceration at Fort Marion, Florida. When he was finally released more than three years later, his health had deteriorated from malaria.

Lone Wolf died near Fort Sill in the summer of 1879, soon after his release from prison. He was buried on the north slope of Mount Scott, the highest point in the Wichita Mountains, in the northern part of what is now Comanche County, Oklahoma.
_________________

Ceyblu: Wow what an amazing picture. You can see the pride in their culture looking at that picture.

Previous Post: « “Only you and you alone can change your situation. Don’t blame it on anything or anyone.” Leonardo Dicaprio
Next Post: “Which is it: Is man one of God’s blunders, or is God one of man’s blunders?” Friedrich Nietzsche »