A campaign attacking the singer Lorde for pulling out of a planned concert in the Israeli city of Tel Aviv has been condemned as bullying by pro-Palestinian activists and others on Twitter.

The 21-year-old performer took the decision after two supporters of the Boycott, Divestment, Sanctions movement (BDS) published an open letter to the singer, urging her not to play in the state as it would be seen as “giving support to the policies of the Israeli government” against Palestinians.

The New Zealander later announced her withdrawal from the show and has been the subject of intense criticism by supporters of Israel since.

Israeli Culture Minister Miri Regev said she hoped Lorde “reneges on her decision” and Israel’s ambassador to New Zealand, Itzhak Gerberg, invited the singer to discuss the issue with him personally.

Others have taken a far less conciliatory approach.

On New Year’s Eve, the 21-year-old was the subject of a full-page advert taken out by a pro-Israel advocacy group in the Washington Post newspaper, which accused her of being a “bigot” who had chosen to align herself with “those committed to Israel’s fiscal destruction”.

The advert was widely condemned for its tone, which many construed as “bullying”.

On his Twitter account, music journalist Eric Boehlert described the advert as “pathetic”, adding: “Lorde doesn’t have to perform anywhere she doesn’t want to, (the) accusations are (an) ugly attempt at bullying.”

Justine Sachs, a Jewish New Zealander, who co-wrote the letter to Lorde, told Al Jazeera she was “overjoyed and surprised” when she found out the artist had listened to her request not to play in Israel.

The 23-year-old graduate student said she and Nadia Abu-Shanab, the Palestinian activist she wrote the letter with, were both fans of Lorde but were unsure whether she would pull out of the show because of possible contractual obligations.

“[We] knew her to be a conscious and engaged person who cares about social justice so we thought she would be sympathetic to the cause,” she said.

The fact that she cancelled regardless of all this is a testament to her bravery and courage, and I have so much more respect than I already had for Lorde.

“We were unsure about whether she would be able to cancel the show, even if she wanted to.

“The fact that she cancelled regardless of all this is a testament to her bravery and courage, and I have so much more respect than I already had for Lorde.”

But according to Sachs, Lorde’s decision has more than just personal significance and should be seen as a major milestone for the BDS movement.

Usual bullying hasbara being hurled at @lorde for the crime of making a moral choice to oppose oppression.All rt thinking p’ple stand w her https://twitter.com/jjz1600/status/947488941489475584 …

The BDS movement started in 2005, after a call issued by Palestinian civil society groups for “people of conscience” around the world to help end Israel’s abuses against Palestinians, by cutting off cultural, academic, and economic ties with the state.

With the advent of social media in recent years, the movement has gained traction and popularity among supporters of the Palestinian cause.

Its successes have been enough to earn the ire of senior Israeli officials, including Prime Minister Benjamin Netanyahu, who has sought to ban organisations that promote BDS in Israel.

According to the University of Exeter’s Professor Ilan Pappe, reactions such as the one to Lorde’s decision are an “indication that the cultural boycott is working.

“Lorde has no political background, no track record as an activist,” he said. “It was a pure reaction of a conscientious young woman whose basic decency has led her to her action.

“There is nothing Israel can do against it, and it drives them mad.

“This is why you have the disproportionate reaction.”

Boycott, divest and sanction – that’s how apartheid was brought down. That’s why they take out full page ads against @Lorde: because it works #Palestine

That is an opinion shared by Sachs, who said Lorde’s decision was “a huge victory for the BDS movement, perhaps the biggest victory yet.

“It is a huge turning point, and demonstrates that all the time, effort and money put into delegitimising BDS and painting the movement as anti-Semitic or extreme is not working,” she said, adding: “People are beginning to realise that BDS is a legitimate and essential non-violent strategy to help end Israel’s human rights violations and the occupation.”

Calling the reaction by pro-Israeli activists “expected”, Sachs said Lorde’s cancellation was evidence that young people, including those who are Jews, no longer had a blind spot with regard to Israel’s “oppression of Palestinians.

“That’s a scary prospect for Zionists and the hysterical and, frankly, tone-deaf response illustrates that.”

b8ta: Yep, that kind of response shows she made the right decision.

LDLover: Israel can f— right off. After hearing about Harvey Weinstein using Mossad to harass journalists and accusers, I am incredibly alarmed at Israel’s influence in America. There are former Mossad agents influencing the mediums that influence american culture. It has been shown in various lawsuits that “investments” in film and related businesses are actually payments to get friends / families into roles, writing credits, etc. Nothing is organic in Hollywood. Stop supporting their disgusting bullsh–. Go read a book. 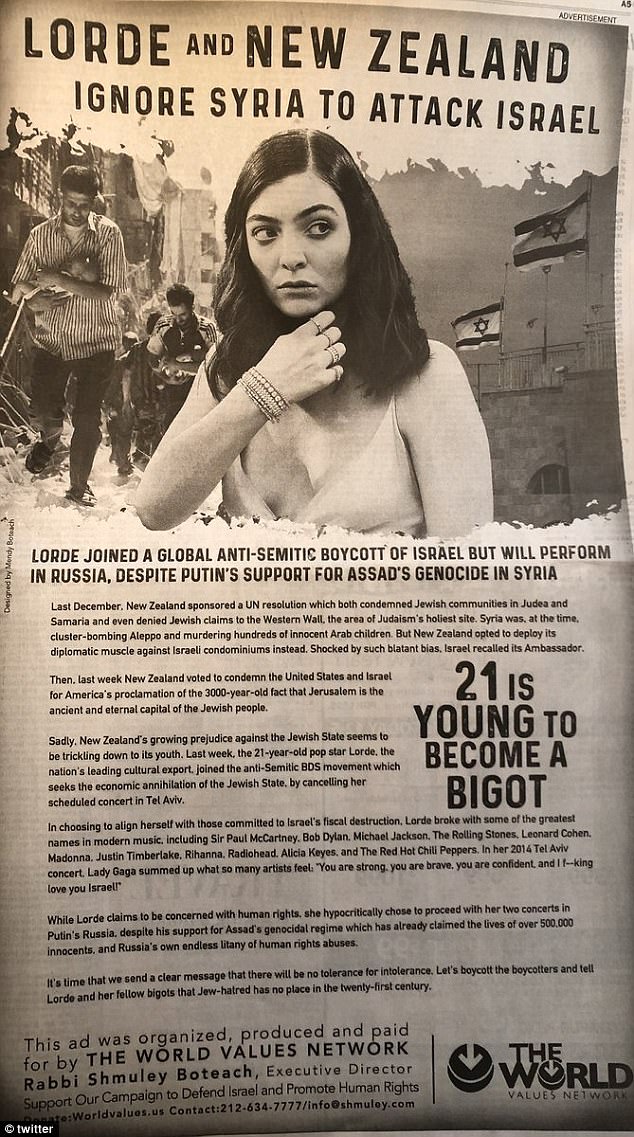 Good for her! Others need to follower her lead and stop being scared of retaliation. If enough people speak out, then maybe things will start to change. But I doubt that will ever happen.

ridestraight: It was okay for powerful Jewish people to boycott Germany, rewrite History…this girl just destroyed whatever career she had.

Previous Post: « The Waco massacre: What the media and FBI told you was a pack of lies.
Next Post: In 2004 a 13yo girl was walking to school but was shot and wounded at a distance by IDF soldiers. As she cowered behind a rock an Israeli captain went up to her and emptied 17 bullets from his rifle into her at point blank range. The captain was exonerated and later promoted to a Major. »