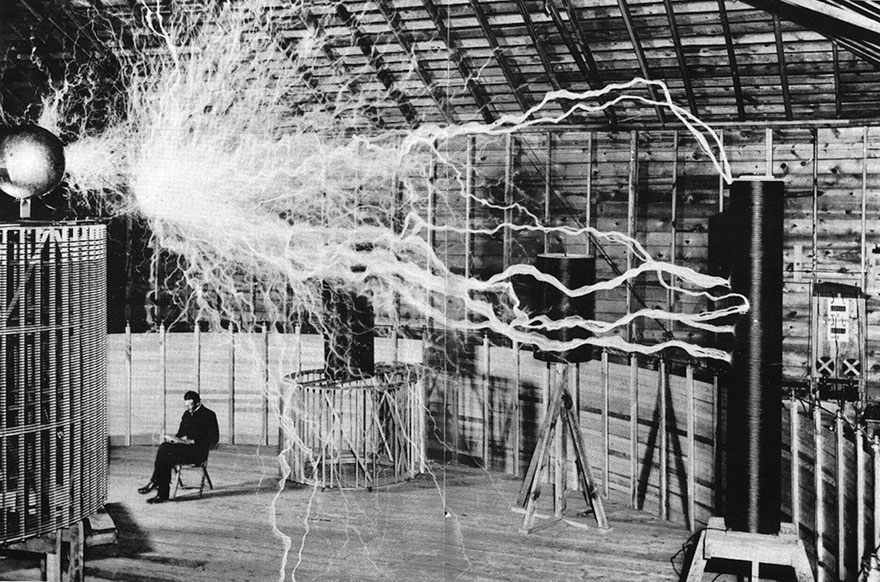 **Story behind the photo**

In December, he sent for his photographer, Dickenson Alley, to capture his work in the best possible light. By using multiple exposures, Alley would create what is perhaps Tesla’s most famous photograph: that of the inventor sitting calmly reading a book, dwarfed by myriad tongues of explosive lightning.

The Colorado Springs lab possessed the largest Tesla Coil ever built, known as the “Magnifying Transmitter”. This was not identical to the classic Tesla Coil. According to accounts, Tesla managed to transmit tens of thousands of watts of power without wires using the magnifier. Tesla posted a large fence around the coil with a sign, “Keep Out – Great Danger”.

The Magnifying Transmitter resonated at a natural quarter wavelength frequency.

Tesla also worked with the magnifying transmitter in a continuous-wave mode and in a damped-wave resonant mode. The Magnifying Transmitter produced thunder which was heard as far away as Cripple Creek. He became the first man to create electrical effects on the scale of lightning.

People near the lab would observe sparks emitting from the ground to their feet and through their shoes. Some people observed electrical sparks from the fire hydrants (Tesla for a time grounded out to the plumbing of the city).

The area around the laboratory would glow with a blue corona (similar to St. Elmo’s Fire). One of Tesla’s experiments with the Magnifying Transmitter destroyed Colorado Springs Electric Company’s generator by back feeding the city’s power generators, and blacked out the city. The city had a backup generator and company officials denied Tesla further access to their feed if he did not repair the city’s primary generator at his own expense.

The generator was working again in a few days.

FDlor: This is not 1904, its 1899 when Tesla was at Colorado Springs ([more](https://commons.wikimedia.org/wiki/File:Nikola_Tesla,_with_his_equipment_Wellcome_M0014782.jpg)). The Colorado Springs lab was torn down in 1904 and sold for scrap to cover Tesla’s bad debts.

TheOtherTeufourt: His hearing is definitively damaged after this. If a regular tazer is loud enough to make you jump, you couldn’t yell over this. « India’s first satellite being transported to the launch pad, July 16, 1981
With the death of Charles Manson, a lot of people are making posts partially crediting him with ending the Hippie Era. What did end it and how? »