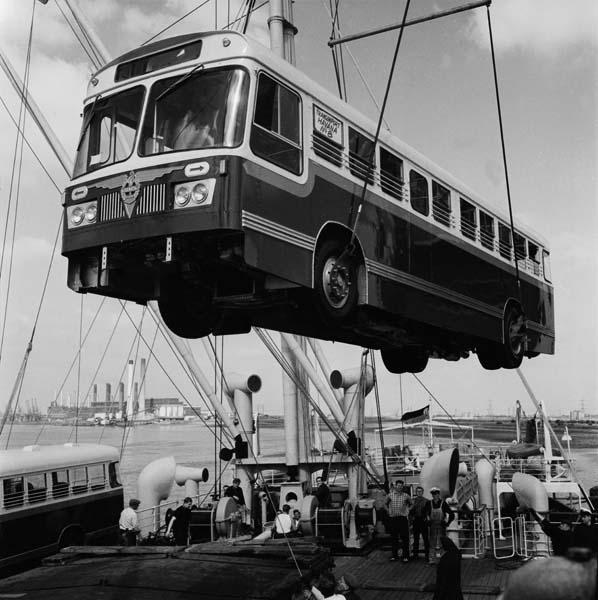 CIA accused of sabotage in Thames

On a chilly October night in 1964, the shipping forecast warned of fog on the Thames. Just after midnight, an East German freighter, the MV Magdeburg, slipped out of her Dagenham dock and headed slowly down river. On deck were 42 Leyland buses bound for Cuba.

Coming the other way was the Yamashiro Maru, a Japanese ship, sailing empty. The ships met at 1.52am. The Magdeburg was making the tight turn around Broadness Point when the Yamashiro Maru ploughed into her starboard side at more than 10 knots, holing her below the waterline and pushing her across the river.

‘It was an accident, an act of God,’ insisted Keith Toms, a tug crewman on the Thames that night. And that was the conclusion. No one was killed, there was no inquiry, no one was accountable and only Leyland Motors, forced to replace the buses, suffered.

Now a historian has found documents that add weight to the suspicions of academics that the ship was rammed at the behest of the CIA – as part of an effort to sabotage anyone breaking the US embargo on Fidel Castro’s Cuba.

With the Americans threatening to blacklist any shipowner breaking the ‘transportation blockade’, Leyland Motors decided to use an East German ship. It was in the maritime archives of the former German Democratic Republic that John McGarry found evidence given by Gordon Greenfield, the British pilot of the Magdeburg, stating that the Japanese ship broke international law by navigating the wrong way and giving misleading signals. The captain and pilot of the Yamashiro Maru refused to speak.

McGarry believes a crime was committed. ‘I felt that the question of CIA involvement might be resolved by an examination of the pilots’ logs which were supposed to be stored at Trinity House and in the Port of London Archives. They cannot be found. The East German papers show Greenfield was deceived by someone on the Yamashiro Maru who sounded a single siren blast before the collision, an intention to pass port to port,’ he said.

Greenfield said in his statement: ‘The Yamashiro Maru appeared to sail towards the south of the middle channel, but I interpreted her exchange of signals to mean that she was about to turn to starboard in order to pass me on her port side. At this time there seemed to be no danger of a collision.’

Tracked down 44 years later, Greenfield said: ‘Given the atmosphere of the day, I suppose it’s not surprising people read something into what happened but there’s no truth in it, there was no blame attached.’ He did agree that, despite reports of thick fog, visibility was so good that the two ships could see each other clearly well before Broadness Point.

Anderson, a Pulitzer prize-winning journalist, is dead, but Whitten, 80, told The Observer that they had two sources. ‘Jack’s contacts were in the CIA and my contacts were in the National Security Agency. I don’t remember a lot but I do know our sources were pretty good, the best really.’

Harold Elletson, director of the New Security Foundation in Berlin, said: ‘It would be naive to think that the CIA wouldn’t dare sink an East German ship in the vital estuary of a Nato ally. They were under pressure to get results and they had a huge budget for sabotage. In 1962 the British freighter Newlane was machine-gunned loading Cuban sugar. The CIA poisoned 14,135 bags of Cuban sugar on the British ship Streatham Hill in 1962 in Puerto Rico.’

Douglas-Home backed Leyland and President Lyndon Johnson refused to speak to him. In April 1964, minister Rab Butler was called to see Johnson. ‘His reward was a tongue-lashing,’ wrote Anthony Howard in the Spectator, ‘during which the great, glowering figure behind the desk reached in his pocket to produce a wad of dollar bills which he flourished as he instructed Her Majesty’s Britannic Foreign Secretary to come to him in future if his country wanted a cash handout rather than go selling buses to Cuba.’

Anthony Glees, professor of intelligence studies at Buckingham University, said: ‘That it was a deliberate sinking doesn’t sound entirely implausible. I’ve a very low estimation of the CIA and its work throughout the Cold War – it’s a history of failure. What would have been inconsistent is that they had an operation in the Thames they got away with.’

But perhaps Magdeburg’s controversial cargo was a coincidence. Keith Toms, then a 19-year-old deck hand, said: ‘It was frightening, a ship like that turning over. I remember people crying out for help. Trinity House, the pilots’ union body, was a very powerful body. No one would be castigated. People accepted that accidents happen. It was such a busy river, and even without fog collisions happen in daylight. I was surprised it sank, you wouldn’t get enough force in a normal collision.’

Dr Kristian Gustafson, CIA historian at Brunel University, was sceptical: ‘What the cousins didn’t do was spray in each other’s countries. But was America irrational about Cuba? Absolutely. People did crazy things.’

RoadRunner71: Cool piece of Cold War history, thanks for sharing! To be more precise, the ship collided and sank in the Thames River which, if it effectively was a sabotage act, would make it even crazier. If you google it [there are pictures](http://d9m0jgq8ttkhl.cloudfront.net/wp-content/uploads/2017/11/Magdeburg3%5B1%5D___Copy.jpg) of the ship overturned with the buses still on its deck.

chrome-spokes: Hm, in a British port a Soviet vessel loads up with British made product to be shipped to Soviet-backed communist Cuba. And knowingly does so as to by-pass an embargo on Cuba. Makes one wonder how serious at the time the Brit govt. took the Cold war.

Edit added: When playing with the big boys, expect the worse, no rules attached. CIA or KGB no matter which.

ReviloRevilo: British leyland were a bunch of commies.

But they won’t have *given* the busses to Cuba so you could argue capitalism wins over communism!

Previous Post: « Pentagon to Undergo First Ever Audit After Decades of Sloppy Accounting and Missing Trillions
Next Post: Sources to shut down a person who tells me that 6 million Jews didn’t die in Nazi Germany and they were under 1 million »